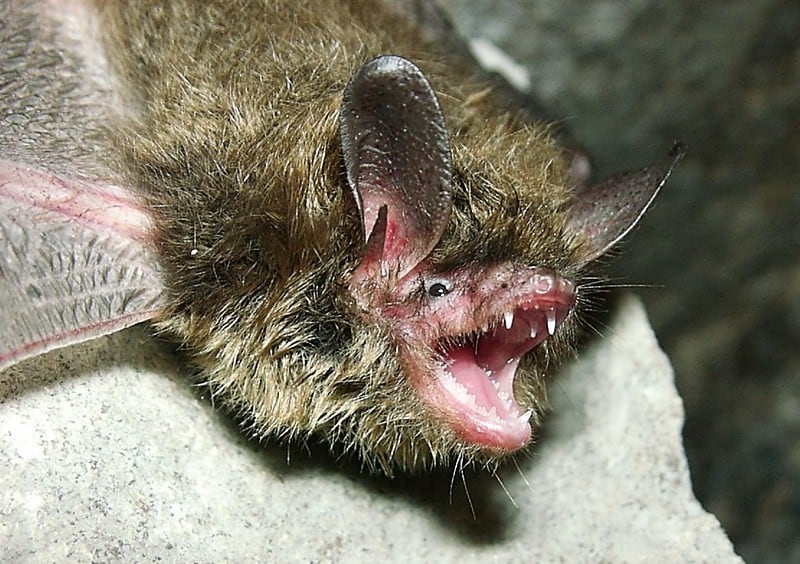 When Do Bats Bite People?

Almost every instance of a person being bitten by a bat has resulted from human initiated or accidental contact.

A less frequent situation involves people accidently disturbing a small roost.  A key defense mechanism for bats is to create roosts in dark tucked away spaces that are both seldom disturbed difficult for predators to access. When these roosts get unexpectedly disturbed the bats will flee and create havoc on anyone in their path as they fly to safety.

As an example, imagine there are some bats that have created a roost behind that pile of plywood in the shed for the project you meant to do last year.  If you decide to start your project and grab some plywood from the shed then you will scare the heck out of the bats that have roosted there and you might suffer a bite as they try to escape.

Keep in mind that bats are wild animals and they are just relying on their instincts to protect themselves.

Why Do Bats Swoop at People?

Bats are acrobatic flyers that turn, twist and dive in their efforts to catch insects.

If you see a bat swooping down at a person then what you are really watching is a bat doing precision flying as they try to catch insects that are around people while doing everything they can to avoid contact with a human.

People attract mosquitoes and it is natural for bats to try to catch them especially at dusk.

How much longer? Well, the oldest bat fossil we’ve found dates back to at least 50 million years ago. (source). That means bats had a solid 49 ½ million years to evolve and perfect their defense mechanisms before human beings ever showed up. But, did you know that bats don’t use their claws or teeth as their primary form of self defense?

Bats are such expert flyers and masters of stealth that they don’t need to gnash any razor-sharp teeth in order to intimidate predators or to scare off a nosy human. Instead, bats prefer to spend their downtime in relative isolation, preferring quiet, out-of-the-way places to rest and breed—places like caves, abandoned mine shafts, and old wells. Why resort to biting when you can hunt, forage, and raise babies in a place that humans aren’t likely to ever frequent?

For bats, the best defense is to stay active at night, thus reducing or eliminating the chance that there is an encounter with a human to begin with. As a general rule, bats will always try to avoid any contact with humans (source). So, if a bat finds itself trapped inside a house, for example, it’s much more likely to keep flying around trying to find a way out than it is to target a human and dive towards it in an effort to bite.

How To Not Get Bitten By A Bat

Even though bats do all they can to stay out of the limelight, it’s still an eventuality that humans will encounter them. And, a situation will invariably arise in which a human might receive a scratch or a bite from a bat. As mentioned in the introduction, there is good reason to be very concerned if a bat does bite or scratch you.

Why? Well, a 2019 report from the Centers for Disease Control revealed that bats pose a significant rabies infection risk—the biggest rabies risk in the nation, in fact, which means getting near them or attempting to handle them is a very, very bad idea (source). This is why it’s crucial to maintain a cautious respect for bats wherever they are found, whether it’s inside of a mountain cabin, the attic in your house or while hibernating in a local cave.

Rabies is not the only infectious disease risk posed by bats. The reality is that bats the world over are known to carry at least four other unique classes of harmful viruses, including:

Anytime someone dies from an animal bite, there is almost always a good reason for why the bite occurred in the first place. Sometimes, the animal in question is cornered or threatened, and it’s doing whatever it can to remove itself from a harmful situation.

However it happens, human deaths attributable to rabid bat bites do occur. However, it’s quite rare. In fact, between 0-3 people die from rabid bat bites every year in the United States (source). Still, it’s a good rule-of-thumb to avoid direct contact with bats whenever possible.

Now that we have established that bats can and will bite or scratch humans in certain situations, and now that we’ve determined what the real risk of death is from such a bite, let’s address some of the more commonly asked questions about bat bites.

As mentioned above, bats do everything in their power to avoid human contact. What’s more, a bat has absolutely nothing to gain in attacking a human. There’s much more danger posed to the bat during such an encounter, as bats happen to be quite fragile in their physical constitution (bat bones and wing membranes are very delicate).

More to the point: Do bats actually attack people in unprovoked acts of violence? No. They simply do not.

The best way to answer this question is to ask someone who has actually been bitten by a bat. Stephanie Stronsick, a wildlife educator (source), describes what it feels like to be bitten by a bat:

“It is very painful, like a bunch of hypodermic needles all at once,”

If you are ever bitten by a bat, it’s highly advised that you seek medical attention as soon as possible. If the bat that bit you can be safely contained for examination, all the better (bats can often be tested for infectious diseases, helping to determine the level of risk involved with the bite in question).

What Happens If A Bat Bites You?

If you’re lucky, nothing will happen beyond simply receiving a painful bite that will heal in time. Bat mouths are not especially large, as they’ve evolved to snatch flying insects out of the air, not to bite humans.

However, in the case of a rabid bat bite, fever, sweating, nausea and confusion can happen if medical treatment is not sought immediately.

There’s nothing in the saliva of a common North American bat that has been identified as particularly allergenic to humans. Typically, bites from things like mosquitoes or horse flies itch because of the mouthpart secretions that react with our skin.

Bats do not have such secretions, and in fact, the saliva of some bat species could lead to powerful medical treatments for those who have suffered from a stroke. It’s safe to say that bat bites do not necessarily itch.

Can Bats Hurt You?

As we’ve already covered, bats can hurt a human if the circumstances are just right. If the bat is being handled aggressively or if it feels threatened and doesn’t have an option, it very well may bite. Remember that bats also have sharp claws on their forelimbs and legs—claws that can easily come into contact with human skin given close enough proximity.

It’s worth restating, however, that bats do not go out of their way to hurt humans. If a bat ever swoops down from the sky and ‘buzzes’ you, it’s possible that your heat signature was curious to them, and nothing more.

The best thing you can do it stay out of a bat’s way to reduce your potential exposure to a bite or the risk of rabies (if the animal is infected). Remember, they have no desire to hurt you.

The Moral: Leave Bats Be

Unless you are a permitted, animal control professional who knows how to physically manage a bat, do not attempt to handle any bat you find. Even though the presence of a bat may shock and surprise you, remember that they are almost always more likely to be more afraid of you than you are of them.

Instead of being concerned about whether or not you’ll get bitten by a bat, seek to understand these fascinating creatures and educate yourself about their behavior and habitat preferences. A great place to start would be by exploring the other bat-related resources on this page.

How Big Are Bats: The Smallest and Largest In The World

Are Bats Rodents? That Is A Toothy Question!

The Fun And Easy Way To Help Bats