Many people are scared of bats.  They think that bats are disease ridden, blood suckers that hide under the cover of darkness so you can’t see them coming.  This fear of bats is driven by a lack of understanding into the true nature of the animals.  Let’s take a closer look at why people are terrified of bats and see if we can’t clear up some misunderstandings. 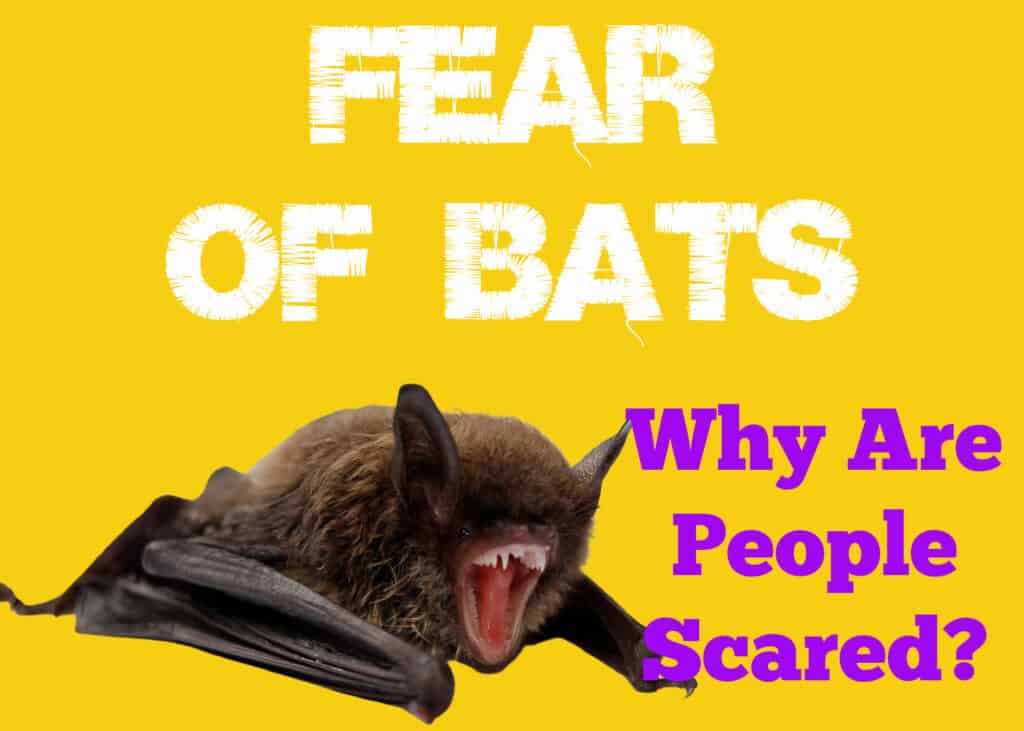 When people have a complete phobia about bats the condition is called “Chiroptophobia“.  While this condition is very real and painful for those who are suffering from it this is not the focus of this article.  Instead of the fear that comes from a phobia, we will be looking at the fear produced by a lack of understanding.  These fears stem from concerns about being attacked, catching diseases and simply being afraid of the dark.

The Dawn of Bat Mythology

The Mayan civilization is one of the earliest to have developed a mythology surrounding bats. Camazotz, also known as the “Death Bat God”, was a figurative idol that was expressed throughout Mayan artwork and culture dating back as far as 2,000 BC. So, we know that even the Mayans had developed a less-than-stellar opinion of bats, going so far as to associate them with death.

When we examine the behavior of most bat species, it’s not surprising that early humans developed such an off-putting opinion about them. Bats prefer to live in the shadows or the dark, they swoop down from the skies during times when we cannot see them well, and they’re nowhere to be found in the daylight hours, unless of course you wander into a cavern and find a colony of them roosting on the ceiling.

However, not all mythology surrounding bats is necessarily negative. For example, the Evaki Goddess of ancient Native American folklore is often depicted as a bat and is associated with sleep and dreams. According to this myth, Evaki is responsible for taking the sun out of a jar every morning and putting it back every evening, contributing to the routine operation of the cosmos. Even still, Evaki is shrouded in a dark, night-ish aura that smacks of disguise and elusivity.

Being bitten by a bat is something that people fear but it is not something they should be worried about.  While bats do bite humans it is almost always in self defense.

It is hard to put an exact number on how many people get bitten by bats but some numbers from the city of Philadelphia helps put things in perspective.  Over a period of five years the city had about 500 reports of bat bites compared to 6,900 reports of bites from cats and dogs.

The most common way people get bitten by a bat is when they try to catch a bat by grabbing it in their hands.  This typically happens when a bat gets trapped inside a house and a clumsy homeowner tries to handle the situation.  Other instances of bites occur when people are handling or trying to release a sick bat they found on the ground.

Bats will not actively seek you out to bite you.  Most bats eat small flying insects or fruits and seeds and do not see humans as edible food sources.

Bats are associated with dangerous diseases such as rabies and that scares the heck out of people.  To be fair, the Center for Disease Control says that most cases of rabies in humans between 1997 to 2006 so it is understandable that people are concerned.

On the other hand, in that ten year period there were only 19 cases of rabies in the United States.  Put another way, there are about two cases of rabies from bats per year.  Here is a look at all of the reported rabies cases in the United States that occurred as a result from contact with bats between 1951 and 2015 along with the method of exposure.

Bats can carry other diseases than rabies.  Regardless of what disease people are concerned about the overarching guidance is the same:

What really freaks people out is the thought of a bat swooping down from the sky, landing on your neck and sucking your blood.

The notion of people being attacked by blood sucking bats makes for great scary movies but is not a concern in the United States.  The only bats that eat blood from other animals are vampire bats.  While vampire bats do exist they only exist in Central and South America where their food of choice is sleeping livestock.

Some people think that bats are simply flying rats and since rats are nasty then bats must be as well.

The good news is that bats and rats have very little in common.  Bats are not rodents like rats as they lack the constantly growing front incisors.  Bats also tend to avoid humans when possible while rats thrive in our presence.

About the only thing rats and bats have in common is that they are both nocturnal, are about the same size and sometimes live in trees.

If it makes you feel better, bats are much more like sugar gliders than rats!

Fear of the Dark

Last up on the list of why people get freaked out over bats is that bats typically come out at night.

This is one of those crazy situations that you can actually make worse when you try to solve it!  The easiest way to deal with being afraid of the dark is carry a flashlight set on high or to stay in lit areas like under a light pole.  The problem is that the light will attract moths and moths are one of the favorite foods bats like to eat!

If the thought of being around bats stresses you out then just remember that, as long as you do not try to handle them, they will not harm you.