Bats are some of the most populous animals on the planet, and they live on every continent except the arctic. They’ve also been around for a very, very long time, dating back as far as 52 million years ago. For as pervasive and long-lived as bats are, it makes sense to ask the question, “What do bats eat?”. 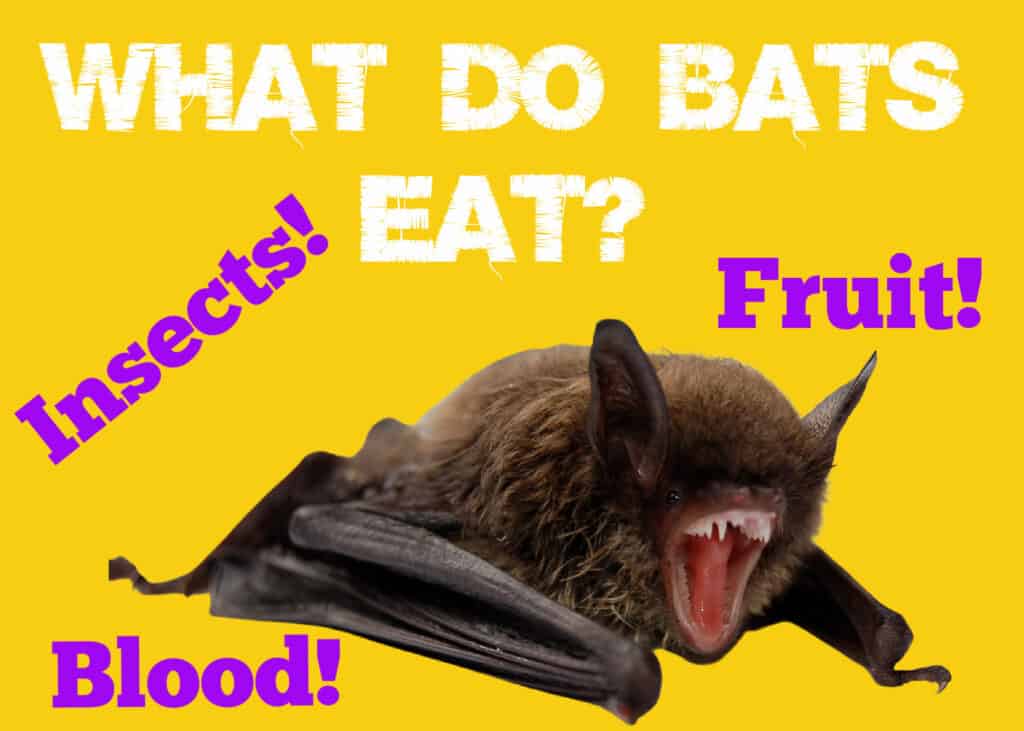 When you examine all of the different types of bats in the world you will find that their is a great diversity in their diets that can be broken into the following categories:

Let’s look at each of these categories in more detail.

According to the National Wildlife Federation, with the exception of a few bat species that are Nectivores, all bats species that are native to the United States are Insectivores that specialize in eating flying insects.

There is a common belief is that these bats consume tremendous amounts of mosquitos which is based upon a research study from the 1960s that showed a bat could eat 10 mosquitoes per minute. However, this was a study of confined bats who were only offered mosquitoes as a food source and does not reflect the dietary preferences of these animals in the wild.

While recent studies have shown that Little Brown and Large Brown bats do consume some mosquitoes in their natural diet, most scientists agree that mosquitoes only make up 1-3% of a bats diet. This makes sense considering the amount of calories bats need to consume and how nutritionally insignificant mosquitoes are.

Detailed studies of the diet of Large Brown bats in Alberta showed that they primarily eat beetles, true bugs and moths.  In contrast, Grey bats prefer insects that fly over bodies of water and primarily consume mayflies.  Studies on the diet of Mexican Free Tailed bats found that, while they loved moths and beetles, they had a tremendous diversity in their meals.

It is fun to look at an extreme example like the roughly 500,000 bats that roost in Carlsbad caverns.  These bats weigh roughly 10 grams and, if they consume half their body weight in insects per night then that means the colony will eat over 5,000 pounds of bugs per night!

Don’t miss this: Why Are Little Brown Bats Important

Alternatively, many bats prefer to dine on fruit or the nectar of some flowering cactus plants that grow in arid environments. These types of bats are known as frugivores, and some of them happen to be the largest bats on the planet.

Flying Foxes are a species of megabats and are found in Australia.  According to the New South Wales government:

“Flying-foxes feed mainly at night on nectar, pollen and fruit and will also feed on flowering and fruiting plants in gardens and orchards.

They are vital to the health and regeneration of Australian native forests because they can transport pollen over vast distances and are also able to disperse larger seeds.”

The importance of fruit eating bats for pollination and seed dispersal has been confirmed in other studies.

In the United States the only frugivore bat you will find is the Jamaican Fruit Bat which, according to the National Wildlife Federation, includes the Florida Keys and the US Virgin Islands as part of its territorial range (source).

It is creepy but true, vampire bats do exist and they survive by drinking the blood of other animals.

There are three species of vampire bats, (Common, White Winged, Hairy Legged) and they all live in either Central or South America. These animals are true hemovores that consume all of their food and water from the blood of other animals.

Vampire bats feed on livestock (horses, cows, pigs) as night while they are sleeping.  The bats will slice open a vein with their sharp teeth and lap up the blood that flows out.  A vampire bat will drink up to a tablespoon of blood in a feeding.  The bat is able to dine on other animals due to two chemicals in its saliva, one that numbs the bite and another that prevents the blood from clotting.

If you’re brave, read this:
Do Bats Bite Humans? Swooping Attacks and FAQs

Scientists recognize the existence of carnivorous bats but few academic studies have been performed to fully understand their diets and behaviors.  Carnivorous bats will eat small rodents, other bats, small fish, lizards, insects and spiders.

One example of a carnivorous bat is the False Vampire bat which lives in areas of Pakistan, Sri Lanka and China.  This bat has a weight range of 40-60 grams which makes it significantly larger than insectivore bats.  The increased size of carnivorous bats is consistent with the findings of the 2016 research referenced earlier.

There are no known carnivorous bats in the United States.

Also, don’t miss this: Fear of Bats (Chiroptophobia): Why Are People Scared?