Due to their uncanny resemblance to rats and mice, bats are often presumed to be flying rodents, a misunderstanding that furthers the animals sour reputation of being a pest.

But, are bats really rodents? Are they even remotely related to Rodentia, the family of mammals that are classified as ‘rodents’?

No, bats are not rodents.  The difference between bats and rodents is based upon their dental structures. The teeth of rodents are highly specialized and have two key features not seen in bat teeth.

Let’s clear up some confusion about the subject while also helping to educate people about the true nature of Chiroptera (bats). 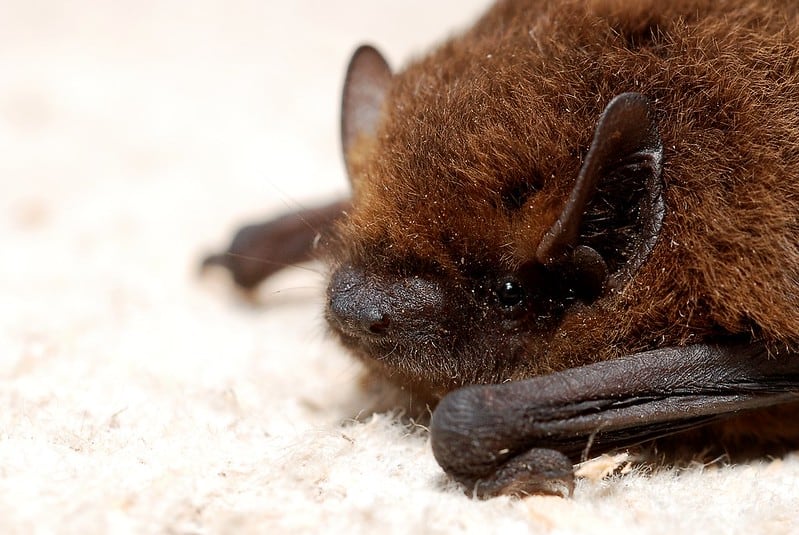 What Makes a Rodent a Rodent?

Both bats and rodents are mammals. That is to say, they both grow fur, have mammary glands that are used to feed their young, and they both give birth to live offspring (neither lay eggs). Also, both orders of animals reproduce through sexual copulation.

Difference Between a Rat and a Mouse

The answer lies in the teeth. That’s right: rodents are unique in that they are one of the very few animals in existence that are classified according to the size, structure, and composition of their teeth (source).

[Fun Fact: Did you know that Rodentia is the largest order of mammals, representing more than 1,500 species throughout the world? The only areas on planet Earth where you won’t find these little critters are Antarctica and a few isolated islands.] (source)

There are two key features that define the teeth of rodents that bats do not have.

The Rodentia order of mammals takes its name from the Latin word “rodere” which means “to gnaw”.  This name comes from the fact that rodents have a set of incisors that never stop growing.  In order for the incisors to remain sharp rodents must constantly gnaw on hard surfaces.

If a rodent is unable to gnaw, or if it’s incisors become misaligned, their incisors will grow out of control and they can starve to death.  It’s a little-known fact that some rodents are capable of chewing through metals like aluminum and lead, a feat that a bat simply couldn’t accomplish.

Curious? Read this Can Squirrels Chew Through Aluminum? How Tough Are They??

Bats do have incisors but they stop growing once the bat is mature. Bats do not need to gnaw to sharpen and shorten their teeth.

So, bats don’t chew into buildings or trees? No. They do not.

It’s a common myth that bats will claw through or chew into places like attics or rooftops in order to access the inside of the structure. This likely has something to do with the misplaced label of ‘rodent’ that is wrongly assigned to bats. Contrary to this myth, bats do not chew through, nibble on, or bore into wood, wires, insulation, or any other structural material.

So, if you ever find a colony of bats in your attic, and there appears to be a telltale hole that looks like it was ‘gnawed’ by an animal, you can be nearly certain that the hole was there before the bats showed up.

A second defining feature of the teeth of rodents is that they do not have canine teeth.  In the position of the mouth where some mammals have canine teeth rodents have flattened gaps called diastemas. (source).

Contrary to rodents, bats have a more complete set of teeth, including sharp canine teeth that are used to puncture fruit skins (think about the fruit bat) and molars that used to chew up the insects that bats catch in mid-flight.  Bats do not have diastemas.

Now that you know definitively that bats are not rodents, you might be wondering, “Do bats eat rodents?”, or the converse, “Do rodents eat bats?”.

The answer to both of these questions is ‘yes’. Some rodents are known to eat bats, and some bats are known to eat rodents. However, keep in mind that in the case of rats, virtually any dead carcass is a candidate for a meal, so a grounded bat that has succumbed to something like White Nose Syndrome could very well become dinner for a lucky rat.

About 70% of bats are insectivores, meaning they dine almost exclusively on insects. The remaining 30% of bats are either frugivores (meaning they eat fruit or nectar), carnivores, or hematophages—a term that refers to animals that consume the blood of other animals. The common Vampire Bat is an example of a hematophagous bat species.

Bats Are Not in the Rodent Family

So, not only do bats fly whereas rodents do not, and not only do rodents have super-strong, constantly growing teeth whereas bats do not, bats will actively hunt specifically for blood, a feature that cannot be attributed to any rodent on the planet.

Speaking of appetites—are you hungry for more information about bats? Feel free to explore the other bat-related resources listed on this page.

Like this: Do Bats Bite Humans? Swooping Attacks and FAQs