Bats are amazing animals that, partly because they are nocturnal, are shrouded in mystery.  Not only are these animals nocturnal, they typically find very concealed places to sleep during the day so they will be safe from predators.  The combination of hiding during the day and nocturnal activity often leads people to ask, “Where do bats live?”

Bats live in locations that protect them from predators and the weather.  These locations are typically caves, attics, abandoned structures or even trees. Bats typically change roost locations throughout the year and spend the winter in special caves that are ideally suited for hibernation. 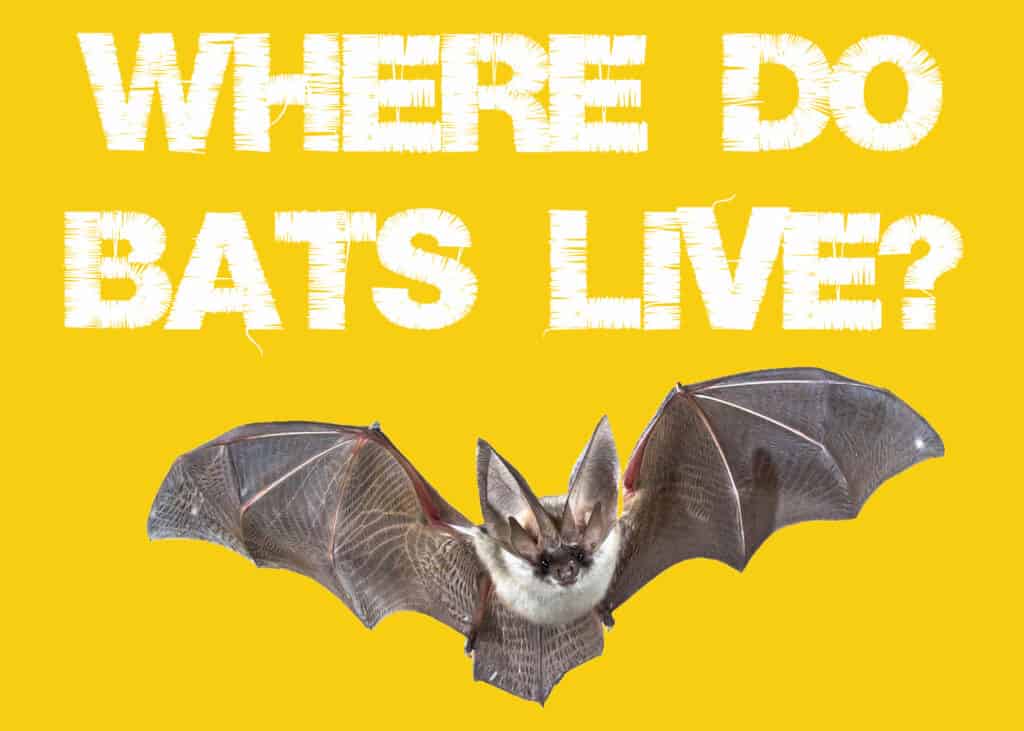 Let’s look at the roosting locations of bats in more detail.

Bats will roost in a wide array of locations as long as the basic need of protection from predators and weather are met.  Bats do not make nests and instead rely upon taking advantage of whatever locations they can find.

Caves are popular homes for bats as are the abandoned mines and human made structures such as wells, attics and the underside of bridges. Rock crevices are favorite homes for some species like Eastern Small-Footed Bats and little brown bats.

The group Bat Conservation International states that of the 47 species of bats that live in the United States, more than half of them live in trees (source). Bats will roost in dead trees beneath loose bark or inside cavities. Others types of bats roost exclusively in the foliage of living trees.

You’ll also like this: Types of Bats: An Introduction To Common Bats Of The United States

Where a bat will roost will depend heavily upon both the species of bat as well as its geographical location.  Below is a list from the College of Agricultural Sciences at Pennsylvania State University that details the preferred summer roost locations by the different types of bats in Pennsylvania (source).

Almost all bat species found in the United States are insectivores and prefer to roost close to a water source such as a lake or river (source).  The water source provides water from them to drink and also attracts their favorite food source.

Bats will often segregate their roost with females forming maternal colonies where they raise their pups and the males forming bachelor colonies.

When fall comes around and it is time for bats to hibernate they become incredibly picky about where they will roost.  In order for a bat to survive hibernation the environmental conditions have to be just right and the optimum conditions vary between species.  For example the roost temperature for a hibernation gray bat must be between 42 to 52 degrees F while the Big Brown bat can tolerate temperatures between 32 to 41 degrees F. (source).

Bats seek locations where the temperature and humidity will be consistent for the full hibernation cycle.  Typically these locations are deep underground caves or abandoned mine shafts.

The specificity of cave requirements can be extreme as noted in the example of the endangered Gray bat.  According to Bat Conservation International, at least 95% of the entire known gray bat population hibernates in just nine highly vulnerable caves, with more than half in a single cave (source).

Here is an overview of several famous bat roosts that are worth pointing out as well as a few interesting bats whose homes are always of interest.