Bats come in all shapes and sizes. Some of them are barely even perceptible as they dart here and there, using the cover of night to add stealth to their nocturnal activities. You may think that all bats are about the size of a small bird, but the real sizes of some of the world’s bats might surprise you.

So, if you have ever wondered, “How Big Are Bats?” then here is the answer:

The most common bats seen in the United States have a length of 2-3 inches when measured from nose to tail, weigh about 10 grams and have a wingspan of approximately 10 inches.  The smallest bat in the world, the Kitti’s Hog Nosed, only weighs 2 grams while the largest bat in the world, the Giant Golden Crowned Flying Fox, weighs in at 1,300 grams.

Let’s take a look at some of these species in more detail. 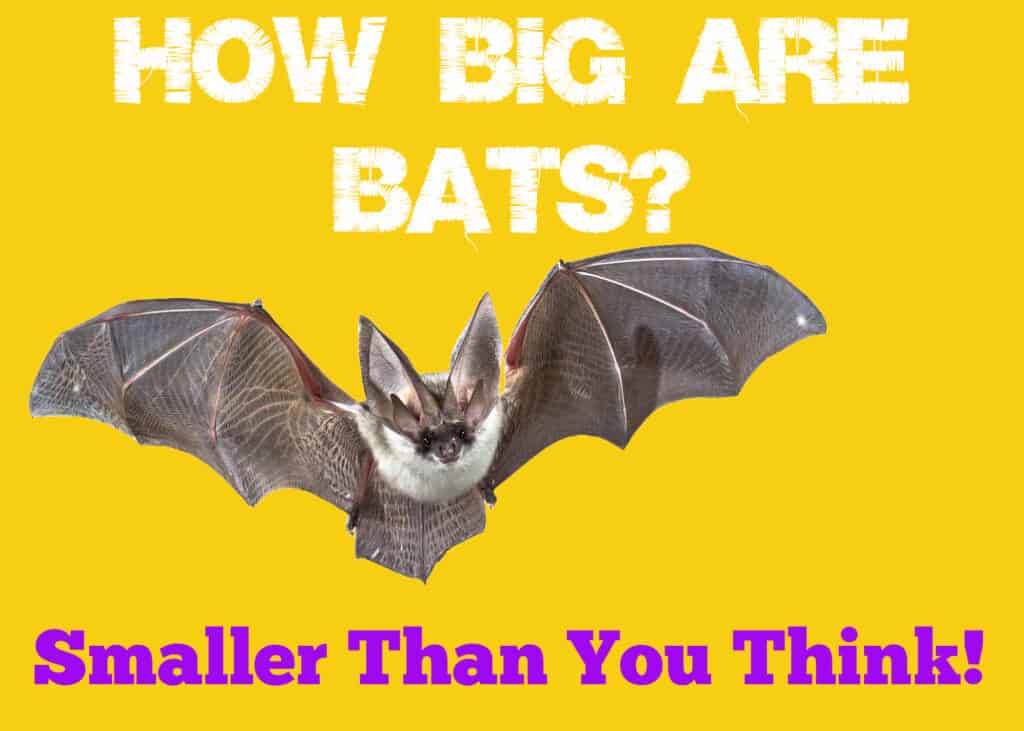 In this article, we’ll be taking a closer look at the types of bats that exist on the extreme ends of the size spectrum. We’ll start with the smallest bats on record, and then we’ll move on to the “Grandfather” of colossal bats—a truly magnificent creature that will take your breath away!

The Smallest Bat In The World

Throughout the world, people love fawning over cute animals. In the case of bats, the argument could be made that the smaller the bat, the cuter it is. If this is true, then when it comes to the Kitti’s Hog-Nosed Bat, we’ve got the cuteness market cornered (source).

These are interesting looking bats that have a pig-like nose, no tail, and with ears and a wingspan that are disproportionately large to its incredibly small body. You won’t believe the size of the wings on this bat!

The Kitti’s Hog-Nosed Bat is also called the Bumblebee Bat, appropriately enough, and it’s technically considered a ‘vulnerable’ bat species that lives in limestone caves of Thailand and Myanmar in groups of 10 to 100 in size (source). Sadly, this bat is on the IUCN Red List of Endangered Species, which is a comprehensive tally of some of the most threatened animals on the planet (source).

This tiny animal is only active for about half an hour throughout the day, and it spends this time snatching small insects (flies, moths, flying ants) out of the air in mid-flight.

The Largest Bat In The World

Now that you know which bats are the smallest in the world let’s take a look at the largest!

The biggest bat on planet earth is the Giant Golden-Crowned Flying Fox, which is native to the Philippines (source). This species of bat was discovered in 1831 and weighs in at an impressive three pounds—you could amass more than 800 Kitti’s Hog-Nosed Bats, and all of them together still wouldn’t equal the weight of a single, full-grown Giant Golden-Crowned Flying Fox.

Unfortunately, like the Kitti’s Hog-Nosed Bat, the Giant Golden-Crowned Flying Fox is considered an endangered species, and efforts are being made by biologists to increase it’s natural populations in the wild.

You might think this beast of a bat requires massive amounts of fresh meat in order to maintain his burly physique, however they’re actually frugivores with a diet that consists mostly of fruit (source).

From study of the roosting behaviors and foraging habitats of the Giant Golden-Crowned Flying Fox, we know that this bat is a master of the forest. It prefers to live in sections of forest known as ‘Riparian Zones’, which often border the shores of rivers and streams.

Because of its preference for forests that are not inhabited by humans, the Giant Golden-Crowned Flying Fox has had to migrate to smaller and smaller regions as humans have continued to disperse throughout the area.

Any discussion about the dimensions of bats has to include the one species that fascinates people the most, vampire bats!

Vampire bats are a kind of leaf-nosed bat found throughout North, Central, and South America. The scientific name for this member of the Desmodontinae subfamily of bats is Desmodus rotundus.

The common Vampire Bat is much smaller than common lore might suggest.

These little fliers only weigh two ounces when fully grown, and their length from nose to tail is only about 3.5 inches (reference). Vampire bats are the only known bat species that dines exclusively on blood, technically classifying it as a hematophagous hunter (‘hema’ meaning ‘blood’, and ‘phagous’ meaning ‘eating’). Other hematophagous animals include ticks, mosquitoes and lampreys.

Don’t miss this: [SHOCKING] What Do Bats Eat: Insects, Fruit and Blood!

The second most common bat in the United States is the Little Brown Bat (source).  People frequently see this species as Little Brown Bats like to roost in abandoned houses and buildings.

Both of these nocturnal bat species are insect eaters and are enormously valuable to humans.

The big brown bat is found in virtually every American habitat ranging from timberline meadows to lowland deserts, though it is most abundant in deciduous forest areas (source).

You’ll also love this: Are Bats Rodents? That Is A Toothy Question!