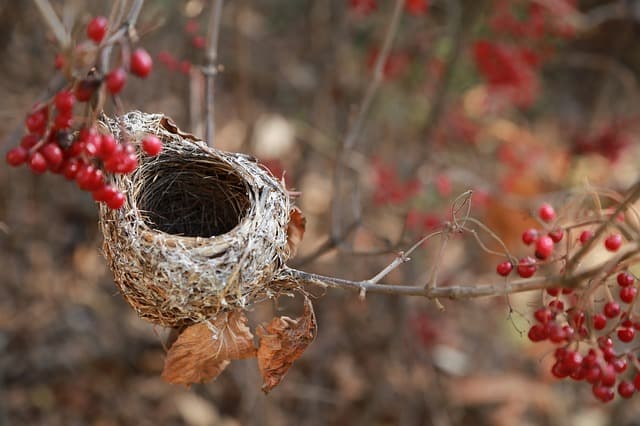 The answer to the question “Do bats make nests?” is: No, bats do not make nests. Instead, bats rely on their community and its isolation from predators in order to breed and continue their life cycle.

Bats tend to seek out hidden, dark places when it’s daylight outside. Some great examples of typical bat homes are caves, abandoned buildings, and defunct mine shafts. These places where bats return after a night of feeding are called roosts, and some roosts can contain thousands of bats.

Bats choose to live in tightly packed, tucked away roosts that aren’t disturbed by other animals or even the elements. When bats roost, they attach their hind limbs to the ceiling or walls of wherever they’ve chosen to ‘hang out’, and they remain upside-down while they sleep, hibernate or simply rest.

Because bats use the warmth of the other bats in their colony by packing in tightly together, there is no need for a nest. Also, bats are mammals, which means they do not lay eggs. Rather, like all other mammals, bats give birth to live babies. These baby bats are called pups, and the pups will rely on the body heat of their mother while they grow. Here again, this removes the need for any kind of nest.

Bat Lives throughout the Year

To better understand the behavior of bats, let’s take a look at what the average bat is going to spend its time doing throughout the year.

In the colder winter months like December and January, many bats will spend extended periods of time in hibernation, a kind of sleep-like state that allows the bat to use minimal amounts of energy to stay alive. Hibernation is a critical period of rest for the bat, and it’s required for the bat to ‘awaken’ in the spring, when food is abundant again and the bat can take to the sky.

Remember that if you ever encounter a colony of bats in hibernation, it is especially important not to disturb them. Awakening bats too early from their hibernation can result in the bats starving to death, as they won’t have the energy their bodies need for sustenance.

Towards the end of March, bats will slowly begin exiting their state of ‘torpor’, or hibernation. What prompts them to awaken is the slow rise in ambient temperature, along with signals in their body that tell the bat, “it’s time to eat!”.

If the weather remains too cold for successful hunting or foraging, bats may remain in hibernation for as long as six months.

April and May are the most active months for many bats, and they can often be found swooping down and feeding on large swarms of insects during the evening or early twilight hours.

In the May/June/July timeframe, many bats are concerned with the task of producing pups. During the summer, there is typically a flurry of activity within the roosts of bats, mostly concerned with birthing pups and feeding them milk from the mother’s teats.

By mid-August, most bat pups born in the early summer reach an age that is sufficient for them to fly for the first time (about six weeks). It’s at this time that bat mothers persuade their pups—even with forceful nudges if needed—to fledge from the roost and learn to hunt on their own.

For many bat species, Fall is a time for love! Bats typically pair off and mate in the months of September and October, making them quite tired indeed by the time November rolls around. And then, of course, it’ll be time for hibernation again.

Interestingly, bat couples can stay together for multiple years, even though their roosts may change from time to time. And, even though bat colonies can grow to impressive numbers, bat mothers typically only give birth to a single pup in any given year.

Who Needs a Nest, Anyway?

If nothing else, bats are incredibly resourceful creatures that take full advantage of the environment around them. They’re remarkably good fliers, and their breeding cycle is in near lockstep with the seasons, giving them a kind of predictability year-over-year.

For most birds, nesting is a requirement for survival. Bats have an alternative solution figured out: they rely on their colony and a safe, quiet place to raise their young. And, because hibernation gives the bat plenty of time to rest up for the warmer months, they’re inherently adapted to periods of feast and famine.

Now you know the facts about bats! They don’t build nests, they don’t lay eggs, and they establish their homes in places humans don’t typically frequent. Hopefully this article clears up some of the common misconceptions about these amazing animals.