Part of the love/hate relationship with squirrels concerns where exactly they fall in the animal kingdom. Almost everyone HATES rats and we are taught early on that rodents should be avoided.  But what about our furry tailed tree squirrels? 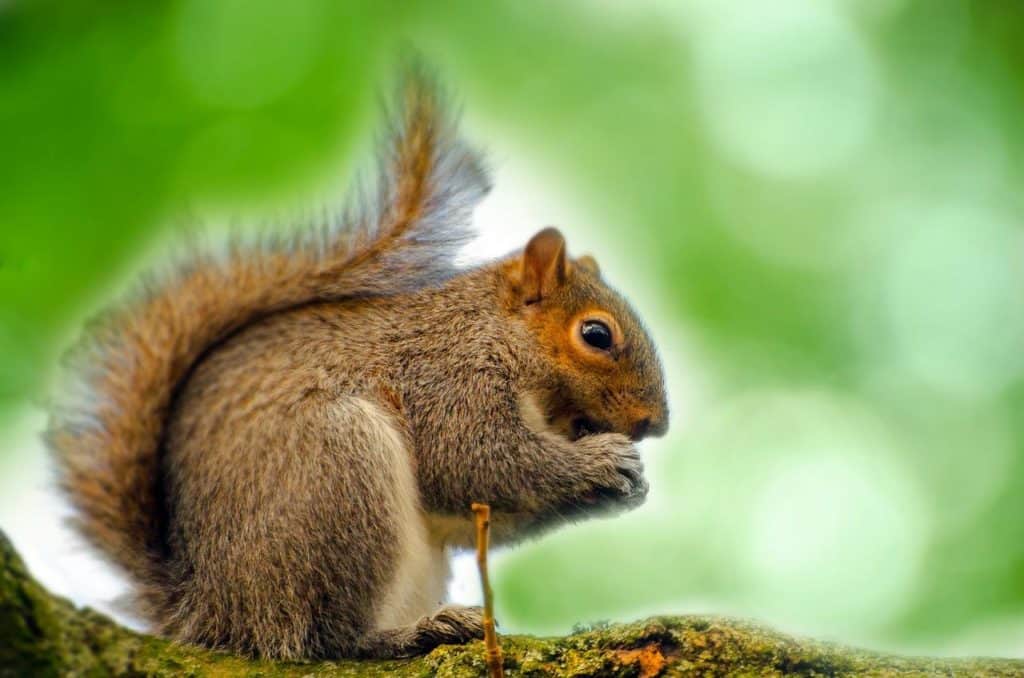 Are Squirrels Rodents or Mammals?

Squirrels are both Mammals and Rodents.  This is not an uncommon situation in the animal world as approximately 40% of all mammals in the are rodents (source).

Here is a look at how squirrels are scientifically classified. 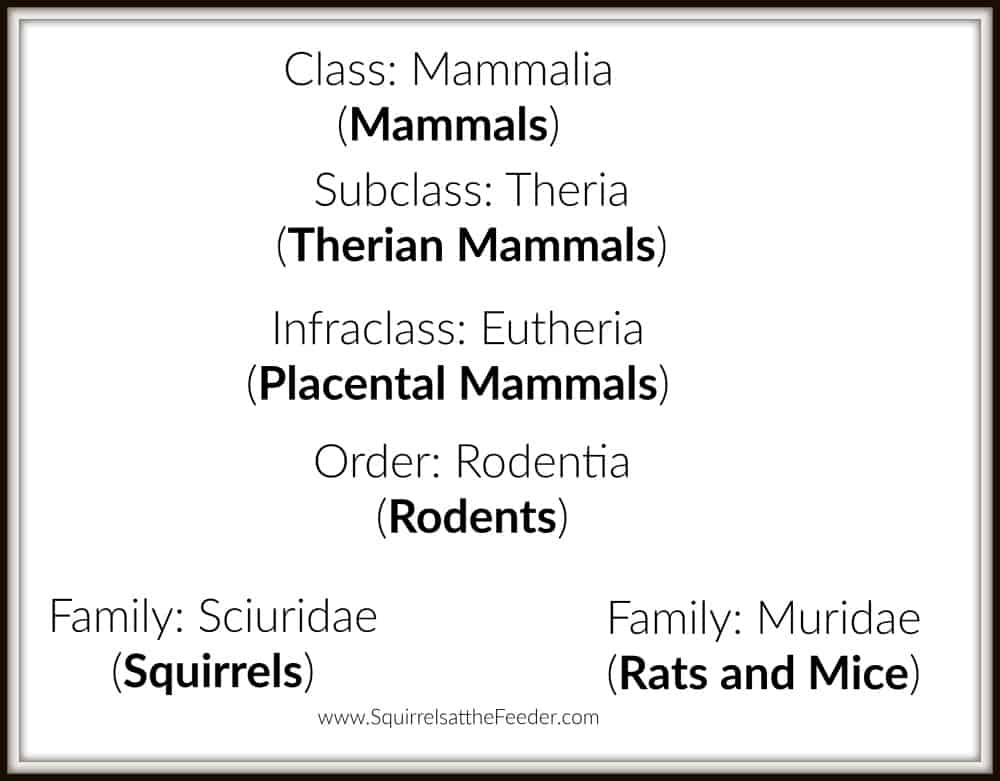 The graphic above is highly condensed and omits many other Orders, Families, etc.

What Qualifies as a Rodent?

The defining characteristic of a Rodent are the specialized front incisor teeth in the upper and lower jaws that are constantly growing.  The name “Rodent” comes from Latin and means “to gnaw”.

All rodents must constantly gnaw on hard materials to keep their incisors ground down and sharpened.

Rodents typically share other characteristics such as small body size coupled with a long tail.  Rodents have a digestive system that produces hard, dry fecal pellets and prevents them from being able to vomit.

Is a Squirrel Just a Rat With a Fuzzy Tail?

While squirrels and rats (or mice) are both rodents they are completely different animal species. So, no, is squirrel is NOT just a cute rat. 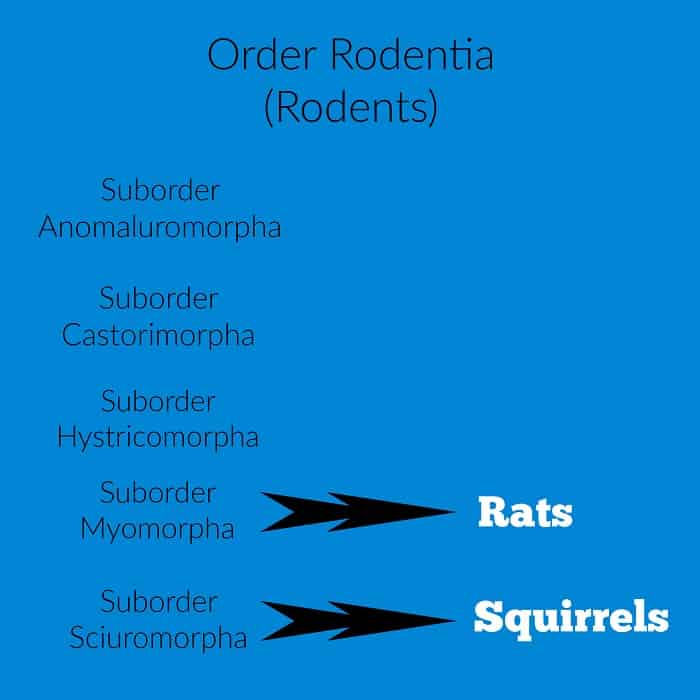 If you have been hearing noises in your attic lately and can’t figure out whether it’s a squirrel or a rat, then the time of activity should help you guess. Squirrels are rarely active during the night so if you hear a lot of movement during this time, then you are most likely dealing with a rat.

Squirrels and rats are diurnal and nocturnal in nature due to their anatomical characteristics. Squirrels possess excellent daytime vision. Their focal vision is very sharp. Squirrels are also equipped with excellent peripheral vision. This allows a squirrel to protect itself from predators and hunt for food more effectively during the day. Their nighttime vision is very poor (except for flying squirrels) and being active during the night would expose them to several dangers.

Rats are the opposite. They have very poor eyesight and rely on their facial whiskers for navigation. These whiskers act as touch sensors. Rats use them to navigate by moving them back and forth. This process is known as whisking. It allows a rat to avoid colliding with foreign objects while it moves around in the dark.

Squirrels and rats also differ in terms of their reproductive habits. Squirrels will usually mate twice a year and produce two litters. These are born towards the end of spring and at the end of summer. The litter size usually consists of 5 to 6 offspring.

Rats are more sexually active compared to squirrels. A female rat can give birth to 6 litters every year. The litter size consists of 5 to 12 offspring.

The gestation period in rats lasts for 21 to 23 days (Laboratory Norway Rat) or 21 to 24 days (Wild-caught Norway rat). Unlike squirrels, rats only require 2 to 4 months to reach sexual maturity. This means that they reproduce at a much faster rate than squirrels. In fact, a pair of rats can produce a billion descendants within three years. (source).

Lifespan of Squirrels and Rats

Squirrels vs Rats: Habits and Lifestyle

Rats and squirrels also differ in terms of their habits and lifestyles.

Rats do not hibernate during the winter. They may showcase lower levels of activity during the cold, but they are generally active throughout the year.

These squirrels employ sophisticated mechanisms such as supercooling (in the case of Arctic ground squirrels) to survive during hibernation. They also undergo physiological changes while hibernating. In the case of the thirteen-lined ground squirrel, this squirrel type may not process cold temperatures like other warm-blooded animals do.

Rats vs Squirrels: Communication and Noises

Rats and squirrels also differ in terms of communication.

Rats tend to communicate via ultrasound frequencies that are inaudible to the human ear. If a rat produces a sound that is audible to humans, then it is usually because the rat is under stress or expressing pain.

Squirrels, on the other hand, communicate through a variety of sounds that are audible to the human ear. These sounds usually work as alarm calls and are used by squirrels when they sense a predator in the area.

As much as I don’t want to, we must take a minute to talk about feces. Yes, poop.

Squirrel and rat feces are actually a lot alike and there’s really no reason to learn the differences unless you get an infestation. Unfortunately, there might come a time when you realize that you are sharing your home with a pest but, before you call the pest control company, you can do a little investigating on your own.

Both rat and squirrel droppings are dark brown or black. However, there is a slight difference in the shape of the feces.

Rat droppings are spindle-shaped. Squirrel feces may also be spindle-shaped or they may appear clumped, depending primarily on the moisture content of their food source (source).

There are several major differences between rats and squirrels and they vary considerably in terms of their lifestyle, habits, and anatomical characteristics. However, they are similar in many ways too!

Here are a few interesting facts about rats and squirrels: