Like other small mammals, squirrels are also susceptible to attacks from a wide variety of predators. These predators vary according to the types of squirrels. Different species of squirrels have evolved to adopt various defense mechanisms against predators, but they still tend to make vulnerable targets. This is also why squirrels live longer in captivity than they do in the wild.

Have you ever wondered, “What Eats Squirrels?” I did and this is what I found! 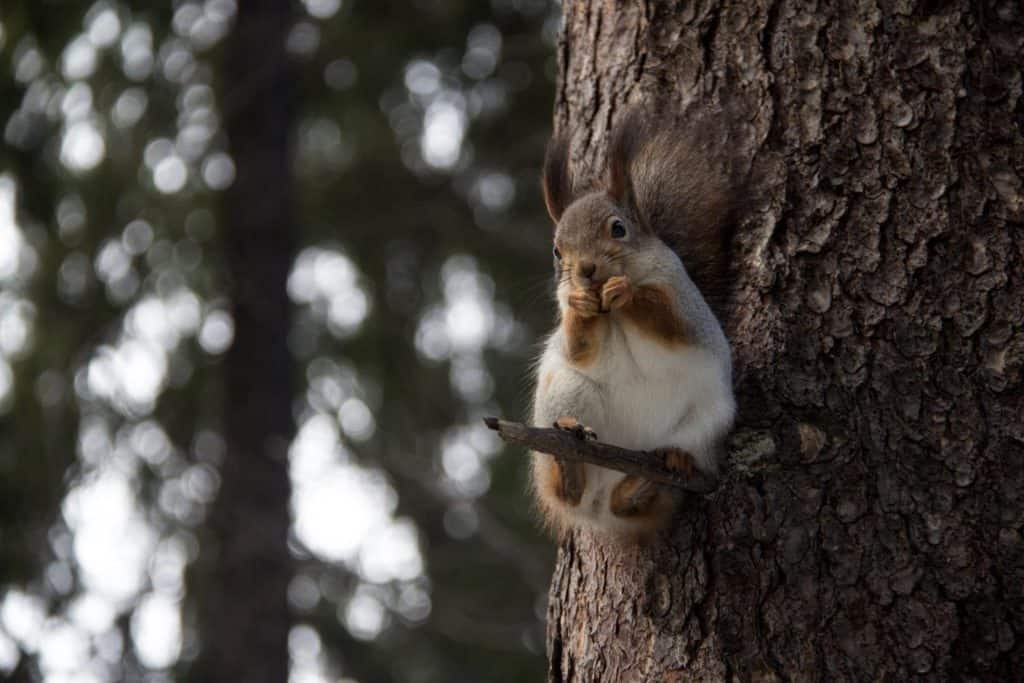 Let’s look at each one in more detail.

Here’s a video of a squirrel getting attacked by two red-tailed hawks:

Mammals form a significant portion of the predators that eat squirrels.

Flying squirrels are usually able to protect themselves from predation as they are only active during the night. However, they can be eaten by bobcats, raccoons, domestic cats, and weasels. In the case of northern flying squirrels, they are also targeted by coyotes and American martens.

Most squirrels are able to protect themselves from mammalian predators by emitting alarm calls and warning their fellow squirrels. Ground squirrels will retreat to their burrows when they encounter a mammalian predator, whereas tree squirrels rely on their speed and agility to escape these predators.

Squirrels are also susceptible to attacks from parasites. The Richardson’s ground squirrel, for instance, can die if an adult flesh fly lays maggots on the back of the squirrel (source). These maggots burrow themselves under the skin of the Richardson’s ground squirrel and feed on its tissue. This process is called lethal myiasis and the squirrel dies after five or six days following the infestation.

Squirrels are known as cannibals as well. So besides aerial, mammalian, reptilian, and parasitic predators, they are also prone to attacks from each other.

Cannibalism in squirrels tends to vary across species. In some cases, the intent is to simply kill the squirrel but not to eat it.  For instance, research on North American red squirrels noted that male red squirrels have a tendency of killing infants (source). It was also noted that these infants were not the fathered by the male squirrels that carried out the attack.

These attacks were not in response to a shortage of food. Instead, male red squirrels were observed to carry out these fatal attacks during the years when more food was available. This is because, during such years, female red squirrels are likely to reproduce twice.

When the first round of breeding happens, female red squirrels will mate with more than one male. As a result, the male squirrel cannot know if he is the father of the infants born after the breeding cycle. The male squirrel then kills these baby squirrels so that the female squirrel can stop lactating and be in the condition to reproduce again.

After breeding season is over, if the infant prairie dogs do not get sufficient access to food, then their parents will kill the competition and ensure healthy food supply. Cannibalism in the Arctic ground squirrel usually results because of disputes over territories, food, and female squirrels (source). It was noted that these squirrels become particularly aggressive during periods of food scarcity and cannibalism is one of the solutions.

What is the Biggest Predator of Squirrels?

So now that we have looked at the different types of predators squirrels have to deal with the question becomes which animal poses the biggest threat.

It turns out that the answer to this question changes as a squirrel ages.

It seems like no matter how old a squirrel is there is always another animal try to eat it for dinner!

Dogs and cats are an interesting class of squirrel predators.

My dogs have not caught any squirrels despite great effort but my cat has killed a literal pile of flying squirrels.  Predation by household pets is believed to be a significant cause of death in squirrels that live in urban environments (source).

The twist however is that, in general, dogs and cats will kill squirrels but do not eat them.

Indeed, when my cat was killing a nest of flying squirrels she would proudly bring a dead one to the kitchen, drop it on the floor and walk away.

Similarly, many dogs, especially terriers, treat squirrels like they would a rat.  They will catch and kill a squirrel and then move on to look for another.  These dogs were bred to eliminate rodents but not eat them.

There are several kinds of predators that eat squirrels. Among aerial predators, the red-tailed hawk appears to be the most common bird that targets squirrels. Weasels, coyotes, badgers, foxes, and bobcats are some of the most common mammalian predators for squirrels. In the case of reptiles, the rattlesnake will frequently target baby squirrels as they are more vulnerable and cannot protect themselves.

Finally, squirrels will often kill each other as well due to food shortage or breeding disputes.

It’s tough being a squirrel.