Squirrels have an admirable level of resistance against cold weather and some species survive in sub-degree weather. But how do they do this? How do their bodies respond as the temperature drops? Do they rely on layers of fat like most other mammals for warmth or are there other ways that allow them to survive?

As per the usual, my curiosity got the better of me and I ended up reading about how do squirrels survive in winter. Here’s what I found: 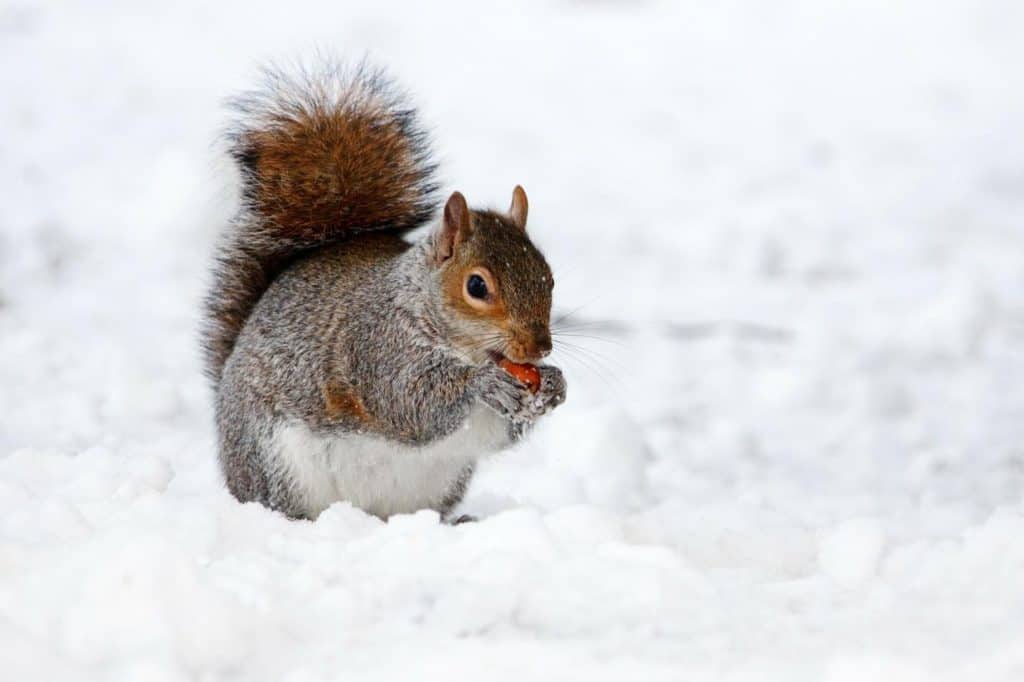 Squirrels Stay in their Dens and Burrows During Winter

Squirrels stay in their homes during winter and do not migrate to warmer locations.

Tree squirrels will often share there dens with other squirrels for added warmth while ground squirrels stay tucked underground in their burrows.

Squirrels will often stay in their dens for days at a time but will venture outside to grab a quick snack by retrieving food stores they cached earlier in the year.

Squirrel’s have a variety of winter survival tools to live long lives but they vary between the different species.  Almost all squirrels bulk up their fat stores in Autumn and rely upon either nests or burrows for protection.  Some squirrels will physically change their fur for added warmth while others will simply go into hibernation, lower their body temperature and slow down their hearts and brains.

Making it through winter is a tough proposition for a squirrel.  If they do not get everything right, or if the temperature drops to an extreme level, then it is possible for a squirrel to freeze to death.

Let’s first talk about how the non-hibernating squirrels survive in cold weather:

Survival Mechanisms of Squirrels that Are Active During Winter

Eastern grey squirrels, red squirrels, and some types of ground squirrels are known to be active during winter. They make use of a variety of tactics that help them survive the cold. These include:

Dwelling Structures That Protect Squirrels In The Winter

Grey, fox and flying squirrels tend to use holes in living trees for shelter during the winter. This type of dwelling structure is called a den and is usually the abandoned nesting cavity created by woodpeckers.  Squirrels will bring in dried leaves and other material to build up a layer of insulation inside the den. If the den is not well insulated or if there are not enough nesting dens for all of the squirrels then it is possible for a squirrel to freeze.

Squirrels can also store food inside of these dens so they do not have to venture outside.

Squirrels will typically share a den with other squirrels for the extra body heat but there is a practical limit to how many can fit into each den.  When there are not enough nesting dens squirrels will become territorial and fight to protect a prime nesting spot.

If you are worried about the squirrels in your backyard freezing to death then the best way you can help them is by providing a warm den for them to use.  There are several great squirrel nesting boxes for sale and your squirrels will appreciate the new nesting cavity.

Ground squirrels, on the other hand, rely on their underground burrows when looking for warmth. Rock squirrels also retreat inside their burrows during winter and only leave when they need to look for food.

Squirrels consume a huge amount of food during autumn which helps in building their fat reserves. How much a squirrel bulks up varies depending upon the species and geographic location but it can be as much as 50% (source). These fat reserves help them survive the cold winter months.

Squirrels also spend the fall seasons build up their food stores so that they do not have forage for food on a daily basis during winter. American red squirrels will build up a single massive central food cache called a midden and will spend the winter fiercely defending its single food supply.  Grey squirrels will create multiple food caches in case one of them becomes compromised.   The food caching of grey squirrels can get a little absurd in neighborhoods like the time someone discovered hundreds of walnuts had been tucked away in the engine bay of their car (source).

A Squirrel’s Body Heat Is Essential To Survival

Squirrels rely on body heat in order to survive during winter and they have several ways of keeping their core temperatures maintained.  The first method is sharing a nest and staying close to each other for warmth. They also make use of shivering to survive the cold (survive). Shivering is a physical reaction to cold that generates body heat.

An interesting note is that one color variant of the grey squirrel has a strong advantage when it comes to body heat.  Academic studies have shown that the melanistic black version of the grey squirrel is 11% more efficient at creating body heat and 18% more efficient at retaining body heat (source).  Check out my full article on Black Squirrels to learn more about the squirrels of the future!

All squirrels develop a thicker coat for winter. Some squirrels, like the Abert and some species of red squirrels, become extra cute and grow extra tassels of hair on their ears!

Rock squirrels adopt an interesting survival mechanism against the cold weather. These squirrels survive the cold by altering the structure of their coats (source). Their coats tend to absorb more solar heat during winter.

This type of thermoregulation allows the squirrels to produce more metabolic heat and maintain their body temperature during winter. The changes in coat structure appear to occur in response to changes in wind speed.

Earlier it was assumed that they change the color of their coats to absorb more heat, however, this was not found to be true as their coat color remains constant.

Survival Mechanisms of Squirrels that Hibernate During Winter

Not all squirrels are active during the winter season. Some, like the Arctic ground squirrel and the 13-lined ground squirrel, tend to hibernate. These squirrels have different ways to survive the cold. These include:

A recent study on 13-lined ground squirrels suggested that these squirrels may not feel cold at all during hibernation (source). It examined how these ground squirrels, along with Syrian hamsters, and mice reacted to cold conditions.

According to the study, the 13-lined ground squirrel does not appear to process cold like most warm-blooded animals do. It noted that when the 13-lined ground squirrel was exposed to low temperatures, their TRMP8 pathway showed very little activity. This pathway is part of the central nervous system and it relays information to the brain when you are exposed to cold conditions.

Ground squirrels survive the cold by undergoing physiological changes during hibernation. Their body temperature falls and their heart rate and breathing rate slows down as well.

The Arctic ground squirrel, for instance, will consume enough food so that their body weight doubles before hibernation (source). They then retreat inside their burrows and slip into a deep sleep for nearly 8 months. Once these squirrels know it’s time to hibernate, their body temperature drops below zero degrees. It can go as low as -2.9 degrees centigrade. This is the lowest body temperature ever recorded in a mammal.

Other physiological changes include their major organs slowing down. An example of this is the 13 lined ground squirrels whose heartbeat will drop to 20 beats a minute (down from the usual 200 per minute) during hibernation.

This type of hibernation is not without risk. In some cases, body temperatures drop so low that the squirrels never wake up again. Even an arctic squirrel that will eventually wake up tends to appear dead to the world during hibernation. Take a look!

Arctic ground squirrels also use a process called supercooling to stop their blood from getting frozen during extreme weather conditions (source). Supercooling involves filtering out any particulate matter in the blood that could serve as a point of crystallization for water.  The removal of particulates prevents the formation of ice crystals so the blood cannot freeze.

Not all ground squirrels hibernate and those that do have different modes of hibernation.

The Richardson’s ground squirrel will arouse several times during hibernation for a few hours at a time (source).  During these periods of waking the squirrel will raise it’s body temperature back to normal for an hour or two and will then go back into hibernation and its core temperature will drop again.

California ground squirrels will usually hibernate but the behavior is often skipped by young squirrels and in regions where winters are not severe.

How Hibernating Squirrels Can Help People

By studying hibernating squirrels scientists have come up with several new leads to help improve the health of humans,

The 13 lined ground squirrel is studied to understand how their blood platelets avoid clotting during hibernation (source). The blood clotting ability of these squirrels changes dramatically depending upon weather they are in hibernation or not.  By studying these animals researchers hope to gain a deeper understanding of the factors and chemistry that could influence clotting in humans.

The arctic ground squirrel is studied to understand its remarkable ability to regenerate critical parts of its brain (source).  Apparently the deep hibernation state of arctic ground squirrels destroys massive amounts of neurons and dendrites that just about wipe the squirrel’s brain out.

However, when the squirrel comes out of hibernation it is able to complete rewire all of the lost brain connections.  By studying these animals researchers are hoping to generate new leads into treating degenerative brain diseases in humans.

Squirrels Are Amazing At Surviving Winter

Squirrels are highly evolved creatures that can survive harsh weather conditions to a surprising degree.

Some squirrels survive the cold through behavioral responses such as retreating inside their dens, nests, or burrows for warmth, triggering shivering mechanisms and building up their fat reserves.

Other squirrels undergo changes on a physiological or a structural level, and a slowed heart rate, low body temperatures, supercooling, and alterations in their coat structure are some examples of this.

Honestly? The more I find out about these creatures, the more they fascinate me. Their survival mechanisms are incredibly sophisticated, and I guess that is the thing about nature. It constantly surprises you.