Have you ever heard a barking squirrel in your yard? You might have. Squirrels are not exactly the most covert of creatures. They are deft, yes, but they are not quiet. In fact, squirrels possess quite the vocal range that helps them communicate.

Besides the auditory calls, squirrels also make use of visual signs and signals to communicate. The signs vary through different species of squirrels. 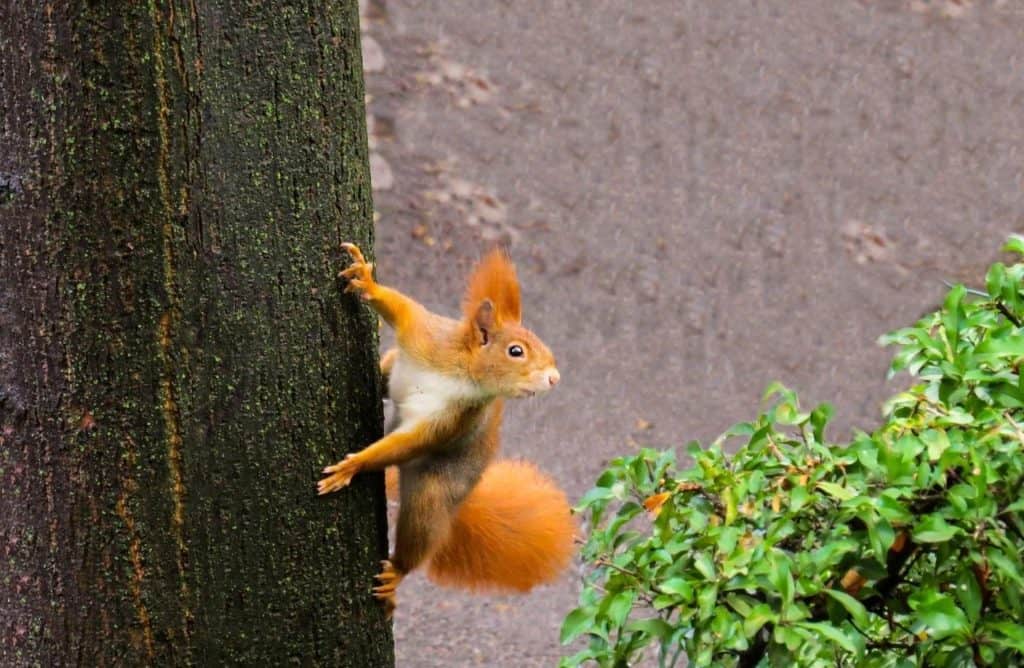 Let’s take a look at the sounds and noises made by squirrels and what they mean:

Most of the noises that squirrels make are considered to be a variety of alarm signals. Squirrels send them in response to a threat and they are essential mechanisms in helping them live many years in the wild. The type of “squirrel sound” depends on the nature of the threat and the type of squirrel. A more detailed look at noises made by squirrels reveals the following (source):

There are several studies on the Eastern Gray squirrel and the communication behavior it exhibits. This tree squirrel uses six types of alarm calls (or call types). These are buzzes, kuks, quaas, moans, buzz-quaas, and modulated quaa-moans and quaas.

Buzzes are buzzing noises carrying low amplitude. They are inaudible unless you are standing a few meters away from the squirrel. Kuks are broadband barks. They have an abrupt onset and will end just as abruptly.

Quaas fall under a similar frequency as a Kuk but differ in terms of length with the Quaa sound being slightly longer. Moans are tonal calls having distinct harmonics. Buzz-Quaas are a compounded version of a Buzz and a Quaa alarm call and modulated Quaa-moans are broadband calls that sound similar to Quaas but have different harmonics.

Kuks, Quaas, and moans have been identified as predator-specific calls. Mating chases, altercations between conspecifics and other social situations involved the use of other call elements.

Don’t miss this: Why Do Squirrels Chase Each Other? Are They Fighting?

It has also been noted that Eastern gray squirrels communicate through tail flicks. In case of an aerial threat (like from a hawk, eagle or owl), the squirrels elicit a moan. On encountering a terrestrial threat, they respond with a tail flick. Kuks and Quaas, on the other hand, do not carry information regarding the type of threat and seem to be general alarm calls.

The escape response of these squirrels depends on the type of threat. If the alarm call is in response to aerial stimuli, the squirrel will run to the opposite side of the tree trunk, away from the stimulus.

In the case of terrestrial stimuli, the response is running to a point that is halfway around the trunk so that they can see the object that triggered the alarm. This means they try and determine whether the threat is a real predator before moving away further.

On the whole, grey squirrels are less conspicuous when responding to an aerial threat as compared to a terrestrial one.

The California ground squirrel uses 3 types of alarm calls when it detects a predator (source). If it is an aerial predator, then the squirrel will respond with a whistle. Large mammalian predators cause these squirrels to make a chattering sound (chatters and chats).

Check this out too: What Eats Squirrels? Which Animals are the Top Predators?

Considering their responses, it can also be said that whistles work as a low-intensity alarm. Chatters and chats, on the other hand, are high-intensity alarms. Here is an example of the “chat”, a single noise alarm.

Curious? Read this: Why Do Squirrels Attack Snakes? They Eat Each Other!

The receivers of the alarm call also respond in different ways. Upon hearing chirps, the squirrels run to their burrows. In the case of whistles, the squirrel stands very still and only runs if the terrestrial predator gets very close.

The Richardson’s ground squirrel is also the only ground squirrel that uses ultrasonic alarm calls (source). This squirrel produces a flat narrow-band call with a frequency of 50kHz. According to research, this ultrasonic call is used in case of distant stimuli/predators, as opposed to near ones. Its relationship to low-frequency chirps and whistles is not clear.

These squirrels are related to the Eurasian and American ground squirrel. Their alarm calls are the most specific across the squirrel species (source). There are no studies that compare the use of their call categories, but their alarm calls are said to be very diverse according to the stimuli.

According to one study, their alarm calls changed in response to people wearing different shirt colors. This degree of specificity is not found in any other squirrels. Their escape responses are also different according to the predator. In the case of aerial predators and humans, the squirrels rush inside their burrows. However, in the case of dogs and coyotes, they will simply stand outside the burrow’s entrance but not retreat inside.

Here is a wonderful video describing the research which has been done on the amazingly complex Prairie dog language.

North American red squirrels respond to predators through three kinds of alarm calls. These are seets, barks, and seet-barks. Seets are high-frequency sounds of low amplitude. Barks are loud alarm calls that have broad overtones. Seet-barks are an intermediate of the other two sounds. They start like seets, add some harmonics, and end with a bark.

The squirrels use seets and seet-barks in response to ravens and other aerial predators. Barks are only used when responding to dogs and people.

Besides being predator-specific, red squirrels also appear to use different alarm calls that reflect varying levels of urgency. For instance, if the squirrel encounters a small bird at the same distance as a large, terrestrial predator, then the level of urgency in the alarm is different.

These squirrels communicate through three types of alarm sounds. The first is a soft tooth chatter, the second is a loud chuck, and the third is a short, loud staccato bark. Palm squirrels use tail signals to communicate as well.

Thomas rope squirrels communicate through chucks, whistles, and soft notes. The chuck sound is short and varies in length. The whistles are loud, whereas the soft notes are comparatively quiet sounds.

Fire-footed rope squirrels also have three kinds of alarm sounds. Their chucks are noisier and span across more frequencies as compared to Thomas rope squirrels. They also use double chucks and staccato calls.

These squirrels communicate through barks and coos. Their barks have varying frequencies and are short, broadband calls. Coos, on the other hand, are longer in length. They are narrowband calls with a descending frequency. The barks are used upon encountering a predator, or in response to loud noises. Coos are used when responding to people.

This squirrel uses a single alarm call which sounds like a soft “pip”. It is inaudible unless you are standing only a few meters away from the squirrel.

It is elicited only in response to people.

Smith bush squirrels use a rattling sound instead of a trill.

The whining sound is said to be elicited by aerial predators and people.

You’ll love this: Giant Squirrels of the World: Some Of Them Even Fly!

Formosan squirrels use distinct alarm calls for large birds, snakes, and feral cats. When encountering a feral cat, the squirrel will elicit a short, repetitive, broadband bark. In case of a large flying bird, the alarm call is different from the cat one.

In the case of snakes, however, the Formosan squirrel exhibits a very unique reaction. The snake alarm call is a mobbing call. It is a high-pitched scream that invites conspecifics to come to a squirrel’s defense and help in attacking the snake.

Besides predator-specific calls, squirrels also make noises in some specific social contexts. These include:

Males make a muk-muk call to show they are interested in mating with a female squirrel. This sound is an imitation of the sound made by a baby squirrel. When a male squirrel communicates using this sound, it means that the female squirrel does not need to consider him a threat.

Baby squirrels also send out hunger calls to their mothers. When they are three days old, these baby squirrels make noises that are similar to a squeak.

After three weeks, they can make growling noises to indicate hunger, and by the fourth week, they are able to communicate through short screams.  Baby squirrels also make the muk-muk sound. It is meant to be a soft call to their mother so that she can come and feed them.

Squirrels also communicate through angry signals to show their aggression towards other squirrels. This can happen when a squirrel is marking its territory or boundaries and trying to keep other squirrels away from its food source. The red squirrel will communicate through screeches and rattles in this case. These sounds are very different from the muk-muk sound that is used during mating as it is meant to threaten intruders.

Grey squirrels also elicit growling sounds during an aggressive interaction with another squirrel.

Don’t miss this: Are Squirrels Territorial? Most Are Not But Some Have To Fight To Live!

Oh, and this: What Do Squirrels Eat? Two Big Surprises!

Squirrel Sounds in a Nut Shell

Besides using these alarm calls to convey to their fellow squirrels about the presence of a predator, squirrels also elicit noises to let the predator know that their presence has been detected. Besides sounds and noises, they also use their tails to communicate and their tail language is as complex as their vocal communication.