The dietary habits of squirrels can be frustrating, hilarious and complex.  On the frustrating part there is a multi-million dollar business dedicated to keeping voracious squirrels out of bird feeders. On the hilarious part are the videos you can find on YouTube of squirrels munching on a slice of pizza or eating away from inside a Halloween pumpkin.  On the complex part is how these animals feed in the wild and how the diets and behaviors change between species.

Have you ever wondered, “What do squirrels eat?”

Squirrels are opportunistic omnivores that primarily eat nuts (acorns, hickory, pecan), tree buds, grains, grasses and fungi.  Squirrels will also eat protein sources such as bird eggs, insects and small reptiles.  The exact diet of a squirrel is dependent upon both the species in question along with geographical location.

Let’s take a closer look at how the diet of a squirrel varies between different species. 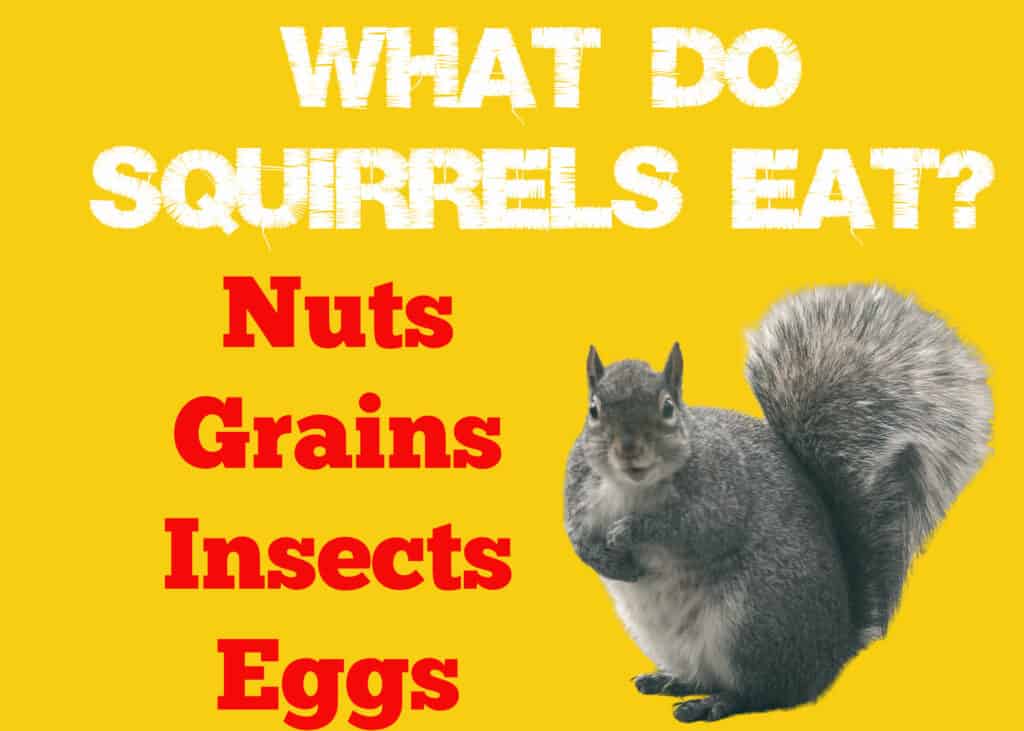 Note: While there are over 250 types of squirrel in the world, this article will only focus on the most common species found in the United States.

In general there are four different types of squirrels that live in trees.

Grey and fox squirrels primarily consume tree nuts such as acorns, pecans, walnuts and hickory nuts.  They will also consume the flowers and buds from multiple species of trees along with any fruit or flowers that are produced.  These squirrels will supplement their diet with fungus, insects, moths and beetles.  Grey and fox squirrels will readily eat bird eggs and nestlings if the opportunity presents itself.

Both species are scatter hoarders that store large amounts of food, mainly nuts, in various locations for consumption in the lean winter months.

The term “Pine Squirrel” refers to multiple species including the American Red, Douglas and Mearns’s squirrels.  While pine squirrels are omnivores their primary food source, as indicated by their name, are pine nuts.  In addition to pine nuts these squirrels rely heavily upon fungus in the summer and will actively dry fungus out for consumption during winter months. Pine squirrels are also meat eaters and will occasionally hunt chipmunks.

The hoarding behavior of pine squirrels is drastically different across the country.

In the western US pine squirrels will create a massive central store of pine cones called a midden.  It is estimated that a single squirrel will store up to 15,000 cones in its midden annually and that a single midden will have enough food for multiple winters.

In the eastern US the creation of middens is less common with pine squirrels relying upon the mast of oak, walnut and hickory tress.  These squirrels are scatter hoarders.

The last of our notable tree squirrels are the Northern and Southern flying squirrels.  These nocturnal creatures all omnivores but their diet is unique in that fungus and lichens are primary food sources instead of a supplements.  The flying squirrel’s love of fungus will often lead it to steal the dried fungus that pine squirrels have carefully dried during the summer.

The National Wildlife Federation states, “Southern flying squirrels are considered one of the most carnivorous squirrels because they supplement their diet with eggs, birds, and carrion.”

There are many different types of ground squirrel and they are much less reliant upon nuts than their tree dwelling counterparts.  In general ground squirrels dine on grasses, shrubs and seeds.

The California ground squirrel provides an excellent example on the complexity of describing a squirrel’s diet.  The California ground squirrel has distinct seasonal food preferences and will almost exclusively eat green grasses and other plants in the February-May timeframe and then will abruptly switch to eating seeds for the remainder of the year.

Ground squirrels also enjoy protein sources such as insects and the eggs from ground nesting birds such as quail and towhees.  A food source that is surprising for ground squirrels is snakes.  It turns out that while snakes like to eat ground squirrels the squirrels will frequently fight back and win!

Ground squirrels are hoarders that store large amounts of seeds for their winter food supplies in complex burrow systems.

One last food item that needs to be addressed is the squirrel’s need for animal bones or antlers.

All squirrels species, both tree and ground based, are rodents.  The defining characteristic of a rodent is the presence of front incisor teeth that never stop growing.  Rodents need hard substrates to gnaw upon.  The gnawing keeps the incisors sharp and prevents them from becoming overgrown.