I have been interested in flying squirrels ever since watching the Rocky and Bullwinkle show as a kid.  I did a little research and discovered  that there are 43 species of flying squirrels in the world. Most of these can be found in Asia, and only two (Northern and Southern) are native to the United States of America.

Flying squirrels are fascinating creatures and are distinct from their non-flying family members in several ways.  Let’s take a look at some interesting facts about flying squirrels!

Flying squirrels do not fly, but glide, between trees. They have a membrane present between their front and hind legs that acts like a parachute. As the squirrel leaps into the air, they can stretch their legs so that the membrane spreads out like wings. This allows the squirrel to glide along with the wind.

Other interesting physical adaptations of these squirrels include thick paws which allow them to land properly on trees without falling and a flattened tail which helps with gliding.

Unlike other tree squirrels like the Grey and Fox, flying squirrels are arboreal in nature and are rarely found on the ground. This makes sense considering their gliding abilities. They can glide across relatively large distances and have been recorded to glide for a distance of 295 feet!

Fact #2: They are Nocturnal

Unlike their non-flying counterparts, flying squirrels are strictly nocturnal in nature. They carry out all major activities during the night and will be rarely seen during the day.

Because they are nocturnal, flying squirrels have evolved to have excellent night vision. They have big, round eyes that allow them to collect more light during the night time. It is believed that, despite have great night vision, that these squirrels are color blind as seeing color serves little purpose at night.

When you combine the facts that flying squirrels:

…the result is that a whole lot of people are living in close proximity to flying squirrels and have no idea that they even exist! 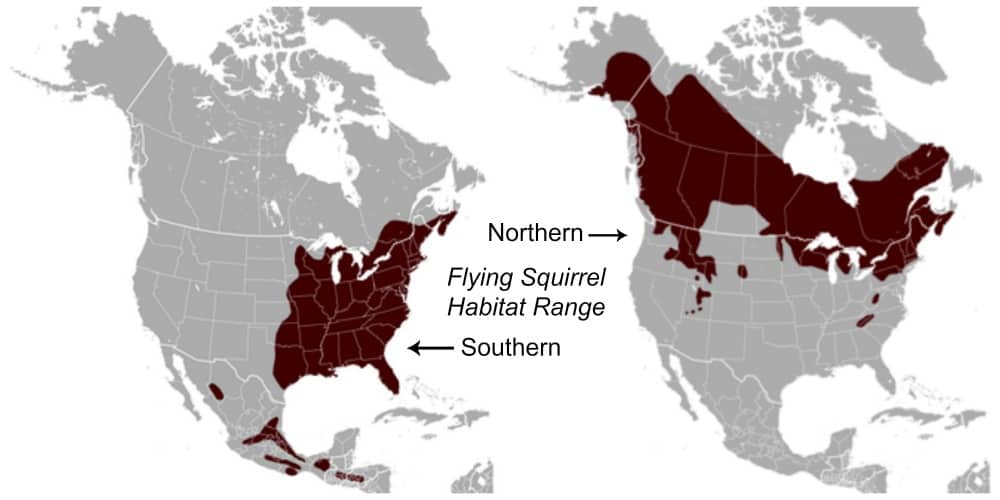 Another interesting fact about flying squirrels is that some of them possess the ability to glow during the night. According to recent research, Northern and Southern flying squirrels emit a pink fluorescence glow when exposed to ultraviolet light.

Infant flying squirrels are blind and hairless. Their toes are fused together at birth and their eyes and ears are closed as well. The ears tend to open after two to six days and the toes will separate from each other after six days as well.

However, they only open their eyes after twenty-four days or a month. They will start growing fur after seven days as well.

The cuteness level of these babies is all the way at 11.

Fact #6: They Eat Their Own Poop

What both species have in common is that they have to eat their own poop.

Fact #7: Some Are Giants

For instance, the Japanese Giant Flying Squirrel is one of the largest squirrels in the world. It weighs as much as 1.3 kilograms. It can be found in Japan, and southern Asia has a distinct pelage of white, brown, buff, or yellow.

There is also the Malabar Giant Flying Squirrel which has a spectacular purple coat!

Keeping squirrels as pets was a common practice in the 1800’s and the practice is making a bit of a comeback.

Flying squirrels can live a long time which is another nice feature to look for in a pet.  Northern flyers can live for 10 years in captivity while the longest recorded lifespan for a Southern flyer was 19 years.

While some species of squirrels are highly territorial this is not generally the case with Flyers.  Flying squirrels are social animals and, as long as resources are abundant, appear to enjoy playing with each other.

The video below shows a community of Southern flyers sharing the treats at a squirrel feeding station.  If this was a bunch of Grey squirrels they would be spending all of their time chasing each other away but the Flyers seem to enjoy each others company.

You can find them in large communal groups that will even share dens in the winter.  Southern flyers are particularly social with some winter nest boxes being shared by up to 25 squirrels! This helps them stay warm in the winter as they do not hibernate.

There is an animal that looks and acts almost exactly like a flying squirrel but is more closely related to a kangaroo!  This animal is called a Sugar Glider.

Sugar Gliders look like Flying squirrels but are actually marsupials from Australia.  In contrast, all members of the squirrel species are placental mammals.  The evolutionary divergence of marsupials is a fascinating occurrence that you can learn more about here.

There are several interesting facts about flying squirrels that distinguish them for other rodents. They are widely dispersed creatures that can be found in a variety of shapes, colors, and sizes.

Take some time at night and see if you can spot one of the cute fellas flying through the trees in your yard.  You might be surprised by what you see!