Have you ever been confused between a chipmunk and a squirrel? I know I have. This is especially in the case of certain types of ground squirrels that have a stripes that are similar to chipmunks. However, there are some notable differences between ground squirrels and chipmunks.

Let’s take a look at what these are: 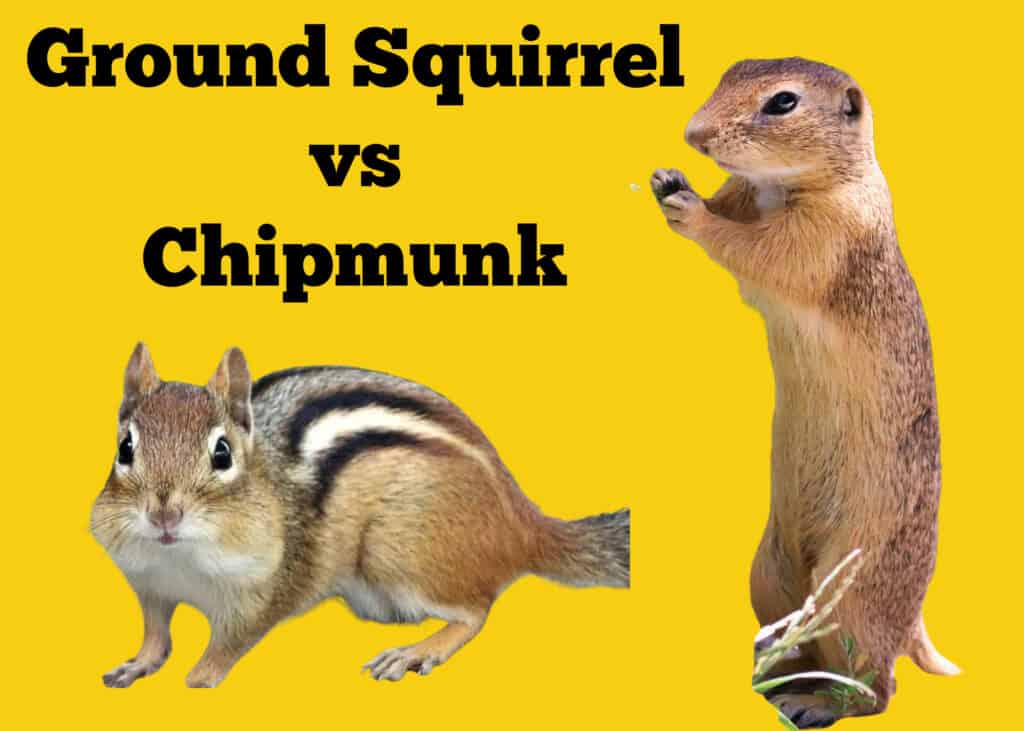 Both ground squirrels and chipmunks belong to the Sciuridae family (squirrels). Chipmunks are, in fact, members of the ground squirrel tribe (Marmotini). This tribe consists of six types of genera.

One of these is the genus Tamias. This is the genus that the chipmunk belongs to. The remaining 5 genera consist of other kinds of ground squirrels that are different from chipmunks.

There are 26 species of chipmunks. Twenty five of these are found in North America. The twenty-sixth species is found in Siberia and is referred to as the Siberian Chipmunk. North American chipmunks mainly reside in the forests of North America.

Ground squirrels are more widespread than chipmunks. They can be found in several regions such as North Central America, Canada, the mountains of west America, alpine meadows, northern Mexico, western Mexico, the deserts of southwest America, northern Africa, California, Washington, the woodlands of Africa, South Africa, Kazakhstan, Russia, and the Arctic.

You’ll also like this: Where Do Squirrels Live? {Grey, Black, Red and Flying!}

Ground squirrels also differ in terms of the color of their pelage. Their coats can be in colors of salt and pepper, olive gray and brown, reddish brown or grayish brown, black, and tawny. These colors depend upon the kind of species you are dealing with.  Chipmunks are not that diverse in terms of color.

Chipmunks also have round ears that stand erect. Ground squirrels, on the other hand, have smaller ears that do not tend to stick out.

If you’ve ever watched a squirrel or a chipmunk eat, you’ve seen how their little cheeks puff out as they stuff them with food.

Ground Squirrels and Chipmunks have cheek compartments to store food in temporarily while they search for more food.

Another difference between ground squirrels and chipmunks is the kind of lifestyle they lead. This includes feeding habits, defense tactics against predators, and hibernation patterns.

Both kinds are omnivorous and will consume animal as well as vegetative matter. They are also known to be cannibals. However, in the case of ground squirrels, cannibalism usually occurs due to territory disputes, food, and females (source).  There is no sufficient research available on cannibalism in chipmunks.

Chipmunks, on the other hand, are frequently targeted by snakes and do not possess the necessary defense required to fight off these predators. Both animals make use of a variety of sounds and alarm calls to communicate with their conspecifics. However, these sounds and alarm calls vary significantly across species and genera.

In the case of chipmunks, they tend to emit low sounds. They make clucking, twittering, and chipping noises. These noises vary according to whether they are used in response to a predator or while communicating with their conspecifics.

You can check out these videos of chipmunks as they communicate through different kinds of sounds:

Both species tend to have babies in the spring and many people will start reporting abandoned or orphaned baby chipmunks in April and May.

Check this out: What to Feed a Baby Chipmunk

The economic importance of ground squirrels tends to be negative for humans. The Wyoming ground squirrel, for instance, plays host to fleas and helps transmit the Colorado tick fever virus and the bubonic plague (source). They are also considered to be agricultural pests.

There are several differences between ground squirrels and chipmunks. From their appearance to their habitats, and finally their lifestyle choices, these members of the squirrel family differ significantly from each other. If you are ever looking to distinguish between a ground squirrel and a chipmunk, I suggest you go for the size. While other traits might still be hard to remember, remember that a chipmunk is considerably smaller in size compared to most ground squirrels.