Did you know that there are over 25 species of Chipmunks in North America?  These cute little rodents are fairly widespread, and their diet is equally diverse. From the Eastern Chipmunk to the Hopi Chipmunk, these rodents will devour a variety of vegetative and animal matter. So, if you’re thinking of Alvin and the chipmunks and how their diet was fairly restricted to acorns, you’re in for a surprise. 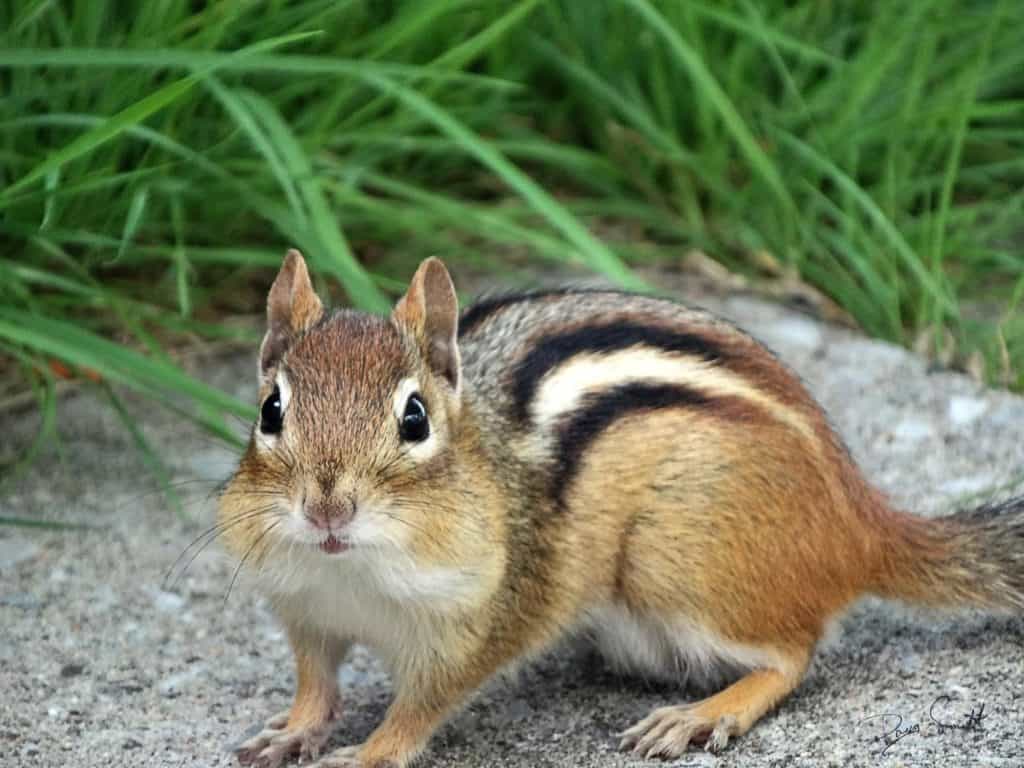 So you want to know, “What do chipmunks eat?”

Well then, here is a brief overview of the different Types of Chipmunks in North America and their diets. (All material was sourced from their respective profiles on Animal Diversity Web.)

The Eastern chipmunk is found in the Eastern United States as well as Southeastern Canada. The diet of this chipmunk is mainly based on grains, nuts, fruits, seeds, and fungus. Besides this, these chipmunks eat bird eggs, mushrooms, slugs, insects, and earthworms.

These chipmunks can be found in Nevada, California, and Oregon. Just like the Hopi chipmunk, these chipmunks are herbivores as well. Their diet is similar to the Hopi chipmunk and consists of nuts, grains, seeds, leaves, fruits, flowers, and fungus. Among nuts, they prefer acorns and hazelnuts. They will also eat spruces, chinquapins, and cherries. Both species these will ocassionally eat insects.

The Yellow-cheeked chipmunk can be found in California. This chipmunk’s diet is based primarily on fungi in the spring. However, for the rest of the year, this chipmunk will eat leaves, grains, nuts, seeds, fruits, and flowers. Their diet includes western raspberry, blue-blossom, bull thistle, acorns, scotch broom, California huckleberry, wax myrtle, and poison oak. They may also eat insects.

These chipmunks are found only in Nevada. They are omnivores, and their diet is a lot more diverse than most other chipmunks that will only eat vegetative matter. These chipmunks eat seeds, nuts, leaves, grains, and fruits. But they’ll also eat invertebrates such as snails and worms. They will also eat the larvae of insects, bird eggs, and mice.

This is the only chipmunk that does not reside in North America. It is found in northern Asia and central Russia instead. It can also be found in Eastern Europe. As far as the diet of this chipmunk is concerned, it eats vegetative matter such as grains, seeds, fungi, vegetables, and fruits. It will also eat animal matter, such as small birds, lizards, and insects.

These chipmunks are found in Southwestern Nevada and Southeastern California. They have the typical diet of a chipmunk and will consume a variety of seeds, green vegetation, and fruits such as juniper fruits and pinons. They will also eat lichens and tree bark. In the case of animal matter, they will eat arthropods. Because of their diet, they don’t need to drink a lot of water. This is because their get their required water from the foods they consume.

This chipmunk is found in southeastern and northern Utah, Colorado, and northeastern Arizona. Their diet consists of berries such as juniper berries, ricegrass, cliffrose, mountain mahogany, squawberry, and skunkbush. They also eat Russian thistle, oak, pinyon, and Indian ricegrass. Besides this, these chipmunks eat leaves, tubers, roots, bark, stems, seeds, and nuts. As far as animal matter is concerned, they eat insects, bird eggs, and carrion.

The Alpine chipmunk is limited to the Sierra Nevada Mountains of Central and Eastern California. Their diet consists of seeds of sedges and forbs. They also eat different kinds of grasses, fungi, and berries. Among fruits, these chipmunks eat bitter cherry blueberries, huckleberries, pussy-paws, and currants.  Since they are omnivores, they will also eat the eggs of birds like the white-crowned sparrow and the Rosefinch.

The Gray-collared chipmunk is found in Eastern and Central Arizona. The most important source of food for this chipmunk is seeds. They also consume a variety of nuts and berries. Besides these, they consume cherries, plum pits, carrions, worms, and insects. They also eat grains, roots, tubers, stems, wood, and tree bark.

This species of Chipmunk is found mainly in California. They are omnivores and will eat a variety of nuts, seeds, and berries. They will also eat insects, small vertebrates, and fungi. They are known for robbing bird eggs from nests. They will also consume garbage when available.

These chipmunks are located in Southern and Central California. They eat more than 70 species of plants. Besides this, acorns are also a major source of food for these rodents. They also eat lizards and insects and will even eat the muscle tissue of sparrows. Along with this, they eat bird eggs and the embryonic membrane found in the eggshells of the California quail.

These chipmunks are found in the Northwestern United States. Their diet consists of truffles, berries, and seeds, depending on the season. For instance, truffles are a major source of food for them during winter. In the summer, these chipmunks eat blackberries, salal berries, and thimbleberries. Come autumn, their diet becomes seed-based. They eat maple seeds, conifer seeds, thistle seeds, and grain seeds. They also eat acorns, grass, roots, and huckleberries.

These chipmunks are found throughout North America. They are highly dispersed and can be found in the Rocky Mountain region, the Western Great Plains of the United States, and Central and Western Canada.  Their diet is very diverse as well and consists of fruits, berries, nuts, snails, fungi, insects, and small mammals and birds. They also eat carrion.

The diet of a chipmunk varies according to the species and the type of food available in their habitat. They mostly rely on vegetative matter as a source of food, but also eat small reptiles, mammals, birds, carrion, and insects. Their diet also provides them with a sufficient amount of water so that they may not need to consume water separately in order to survive.