If you haven’t noticed it before, chipmunks tend to disappear as the temperatures drop when we enter into the cold months. They then resurface during March or April when it is spring again. If a particular animal disappears for the winter then you might think that it is hibernating. But what about these guys…Do chipmunks hibernate?

Chipmunks are not true hibernators but they do enter states of torpor.  Chipmunks retreat to their burrows and enter a hibernation type state but wake up every few days to eat and defecate. So, instead of hibernating, you can term chipmunks as ‘light sleepers’. 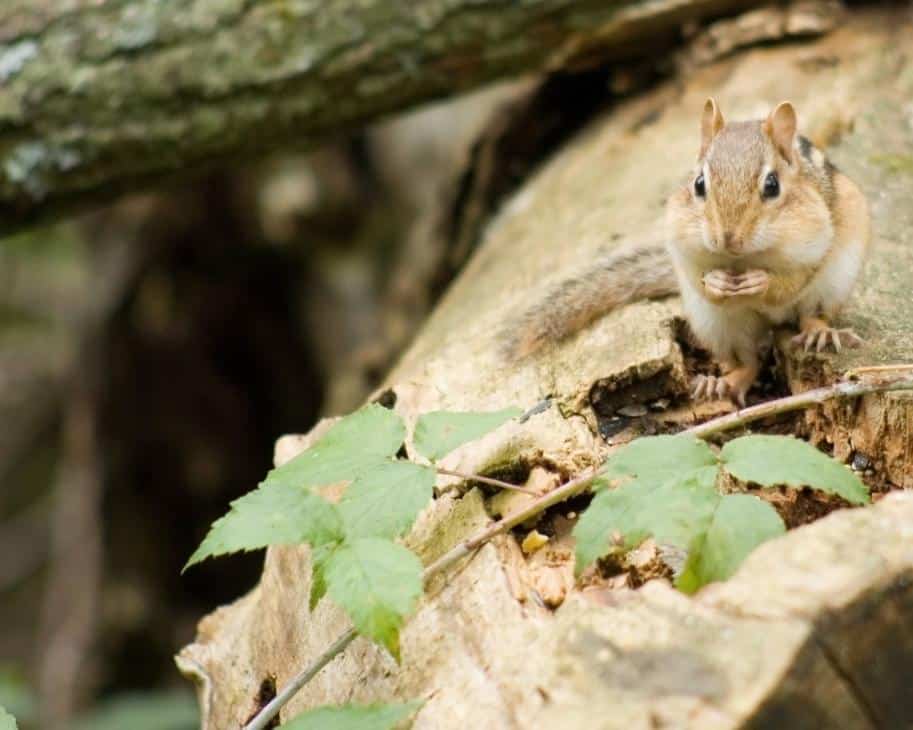 Most animals that hibernate will spend summer and autumn eating all possible food items. This helps build up their body fat. Once these animals enter into a state of hibernation, they use this stored energy to survive through winter. If an animal is unable to consume a sufficient amount of food before winter, then they will starve to death during hibernation and never wake up.

The chipmunk’s behavior is inherently different in this sense. Instead of consuming food and building up its energy stores, the chipmunk chooses to be a hoarder. It spends the months of summer and autumn in collecting and storing food so that it can be consumed later. These stores of food are kept deep within their burrows. These burrows can be at least 30 feet long.

Although the chipmunk consumes a variety of foods such as nuts, seeds, fungi, berries, and insects, their food supply for winter consists of nuts and seeds. This is because these items are less likely to perish in storage and will be edible after several long months as well.

Chipmunks tend to be quite creative in terms of storing food. They don’t just rely on volume but also on location. Even if another chipmunk invades their food stores, the chipmunk will not be faced with a shortage of food. These animals tend to have emergency food cached in a separate burrow that is well away from their usual food stores. Some chipmunks will also have multiple emergency caches. This helps ensure their survival during winter.

It often happens that chipmunks will also forget where they stored their pile of nuts and seeds. This isn’t a waste of resources, though. As time goes by, these food stores can nourish the soil. It is also said that thousands of oak, beech, and maple trees are planted as a result of these forgotten food stores.

Use of Cheek Pouches

Chipmunks survive in the winter through a variety of techniques. They are not true hibernators and will slip into a mild state of torpor. Their bodies undergo physiological changes such as a slowed heart rate and respiration rate. Their body temperature drops as well during this state. Chipmunks will occasionally wake up from their sleep to feed, urinate, and defecate before replenishing their energy supply and going back to sleep again.

Even though they wake up during the cold months, you are unlikely to see a chipmunk emerge from its burrow. This is because they store a large number of nuts and seeds within their burrows during summer and autumn. They consume food from these stores during winter. A chipmunk is very careful in safeguarding its food supply from invaders. As a security measure, it will store food in multiple locations. Chipmunks also rely on their cheek pouches for hoarding extra food for winter.