If your yard is often visited by squirrels, then you may have encountered these furballs quite a bit. But have you ever wondered which type of squirrel you’re playing host to? This may come as a surprise to you, but there are 269 species of squirrels in the world!

Of course, if you try and learn about each type, then it can become confusing really quickly. Some basic differences can help narrow things down though. For instance, if your squirrel appears to live in trees, then these are tree squirrels. If they spend their time on the ground instead, then you have a ground squirrel for company. 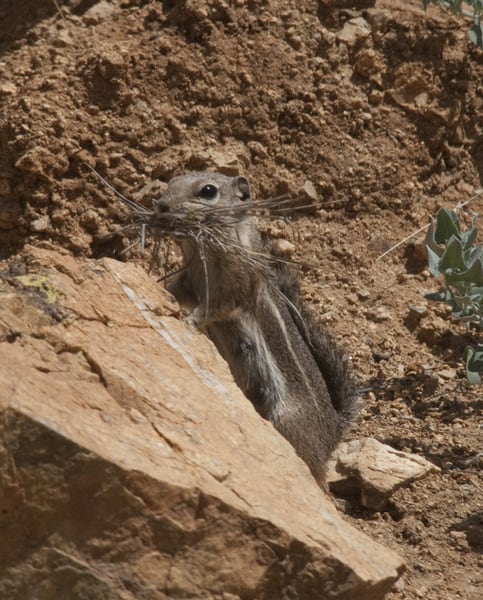 What are Ground Squirrels?

Belonging to the Sciuridae family of rodents, the ground squirrel is a type of a squirrel that lives on the ground and inside burrows.

The folks over at Encyclopedia Britannica say there are 62 different ground squirrel species but it is tricky to get an exact count.  Technically, any squirrel that lives in burrows in the ground is a ground squirrel. However, by that definition, you end up including species like Prairie Dogs, Groundhogs and other marmots in the count.  Ground squirrels are different from chipmunks as well.

Ground squirrels are active during the day and sleep at night. They have short legs and a tail of moderate length. The color of their fur can vary quite widely and it can be grey, pale brown, tawny, olive, reddish brown or dark brown. Most ground squirrels also have stripes and spots on their skin. Their fur texture can vary and it could be thin and rough or soft and thick. It can also be woolly in some cases.

Unlike tree squirrels, many species of ground squirrels hibernate to make it through the winter.

They may not look like much, but ground squirrels are actually pretty interesting creatures. I was reading through some of the research that’s been done on them and these incredible facts about ground squirrels will certainly make you look at them in a VERY different light:

Ground Squirrel Fact #1: They Can Take on Rattlesnakes… And Win!

Adult ground squirrels sometimes protect baby squirrels by covering them in snakeskin and masking their scent. They may also chew the snakeskin and then lick their babies instead, just like in this video here:

As far as defense tactics go, mature ground squirrels defend themselves by warning a rattlesnake that their presence has been detected. They flick their tails and send out an infra-red heat signature through their tails to the oncoming predator. This infra-red head signature also makes the squirrel appear bigger to the snake.

There have also been several reports where a ground squirrel did not play it safe and ended up attacking the snake instead. What’s more, the snake got killed in the attack.

Take a look for yourself!

Arctic ground squirrels hibernate for 8 months during the winter. And that’s not all, they also adopt a unique mechanism of survival during this period. Given the extreme weather conditions and the unavailability of food, Arctic ground squirrels go in their underground burrows and slip into a deep sleep. During their period, their body temperature can drop to -2.9 degrees centigrade. This is the lowest body temperature recorded in a mammal. Some of their major organs slow down during hibernation, while others can shut down entirely. If you come upon an Arctic squirrel during this period, you are likely to mistake them as dead.

Arctic ground squirrels also adopt a process called supercooling. This process prevents their body fluids from freezing during hibernation. Supercooling is basically the removal of any particles in the blood that would serve as nucleation points for water crystallization.  By removing any nucleation points the water in the blood will not freeze at standard temperatures.

Scientists are studying this squirrel as they think it might help them find a cure for degenerative brain diseases.  It turns out that when the Arctic ground squirrel shuts itself down the extreme cold and lack of oxygen just about destroys the animal’s brain.  However, as soon as the squirrel starts to warm up their brains regenerate all of the lost synapses!

The 13 lined ground squirrel also goes into an extreme hibernation where its body temperature can drop to 4C and will only have 3-5 heartbeats per minute.  Scientists study this squirrel to understand how it can have such a low flow of blood without developing lethal blood clots.

These squirrels have a heat regulating mechanism that is pretty cute called Heat Dumping.  When the squirrel gets too hot it will lie on the ground in a “spread eagle” manner and transfer as much heat from its body into the ground.  In the video below you can see this antelope ground squirrel doing a “heat dump” at around the 1:13 mark.

By the way, the same researcher reported to National Geographic that these squirrels will also perform oral on themselves for the same reasons.  She described the act as “quite acrobatic:.

Ground Squirrel Fact #5: They Can Murder Their Competition

Prairie Dogs have a notorious reputation among ground squirrels. They tend to kill Wyoming ground squirrels. Squirrels are known cannibals, but Prairie dogs do not eat these squirrels after killing them. Research suggests that the killing is meant to serve another purpose: Eliminate the competition.

Like all animals, Prairie dogs must forage for food. Their diet consists of grass and prickly pears. Interestingly, the Wyoming ground squirrel also consumes the same food which leads to competition. If the Prairie Dogs are unable to provide enough food to their offspring, then they can resort to killing the competition. As a result, their offspring end up living longer.

I hope you enjoyed these incredible facts about ground squirrels. There is a lot that we still do not know about them, but there is no denying the fact that these rodents make for very interesting creatures.