Have you ever heard a chipmunk? Even if you haven’t, then a quick search through Google will tell you how chipmunks are quiet animals.

However, they will emit an alarm call when they spot a predator nearby. Chipmunks can make quite a variety of sounds as well. Several studies have been conducted over the years that aimed at deciphering the language of these furry animals.

So, without further ado, let’s take a look at what the scientific community has to say about chipmunk sounds and what they mean! 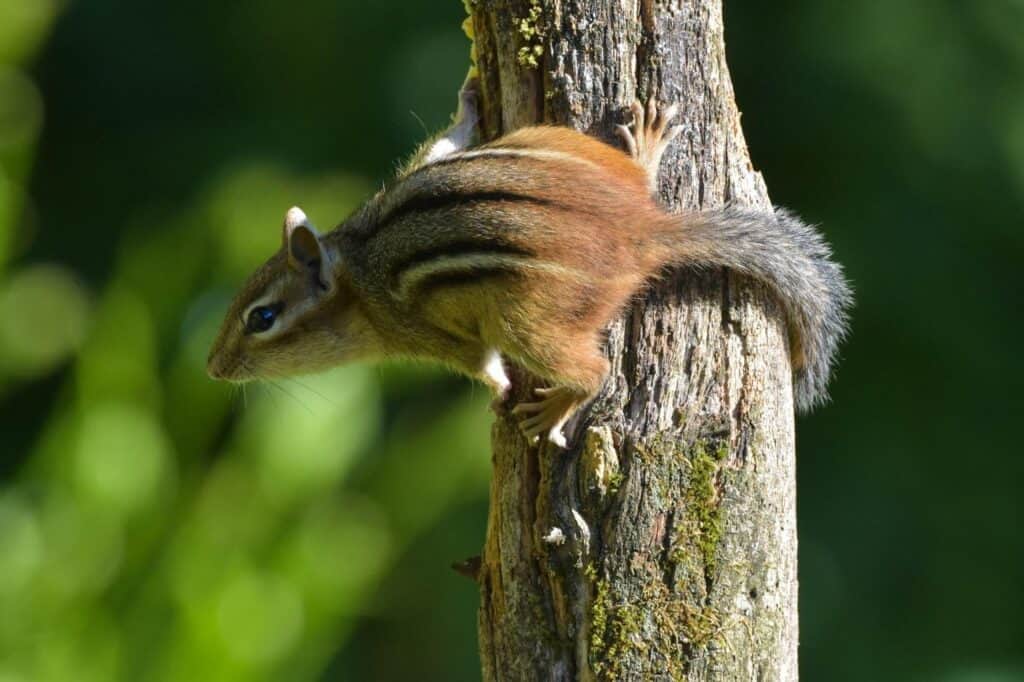 Eastern chipmunks emit three types of chipmunk alarm calls in the presence of predators. These include:

Chipmunks emit chipping sound that consists of a series of notes repeated over and over. These can be a few seconds long but can also last up to many minutes. Chipping sounds are emitted at a frequency of 2.8 to 9.6 kHz. As per the study, these sounds were emitted in the presence of a mammalian predator. However, other studies suggest that chipmunks emit this alarm call in the presence of an aerial predator as well (source).

These sounds are emitted in the presence of an aerial predator. The chipmunk is usually present on an elevated surface when producing this sound. As per a study, both chipping and chucking sounds can last for at least 30 minutes (source).

The rate at which these notes are delivered is twice as fast as well.

The trill sound is distinctive from chips and chucks. These are shorter in duration and are emitted when the chipmunk is being pursued by a predator. Chipmunks generally emit these sounds at the end of a chase. Chips and chucks are mostly used when the chipmunk detects a predator. Trills can be best described as a multi-note call that has a low amplitude. These are emitted once or twice. The individual notes in trills are not identical as well (another major difference from chips and chucks). These notes differ in terms of frequency and length. The time interval between the individual notes will vary as well. Trill sounds are harder to hear since they are not repeated as much as other chipmunk sounds.

As mentioned earlier, the context of a trill is also very different from a chip or chuck. They are emitted by a fleeing chipmunk and can be in response to mammalian, as well as, aerial predators (like hawks). Baby chipmunks have also been observed to emit this sound when running away from adult conspecifics.

When chipmunks hear the trill sound, they become alert. This sound is also distinctive from the ones emitted by most ground squirrels. However, other squirrels, such as yellow-bellied marmots, hoary marmots, Olympic marmots, and Vancouver Island marmots, emit a trill sound when they disappear into a burrow (or den) to hide (source). This is usually when they are hiding from a predator.

Another study examined the foraging behavior of Eastern chipmunks in response to alarm calls emitted by their conspecifics or relatives (source). These alarm calls signal that a predator is in the vicinity. It was observed that Eastern chipmunks tend to change their foraging behavior when they hear an alarm call. They become more vigilant. They constantly scan the area as they stuff their cheeks. This response is consistent across other species of squirrels as well. The responses also vary according to the following factors:

Chipmunks also decrease their load size in response to an alarm call. They tend to spend more time in their burrows after hearing an alarm call as well.

Also, don’t miss this: Where Do Chipmunks Live? Right Under Your Feet!

Male chipmunks are known to produce chirps and croaks when pursuing their potential mates (source).

All About Chipmunk Sounds

Studies suggest that the Eastern and Western chipmunks produce three types of sounds or vocalizations. These are chips, chucks, and trills. Chipmunk sounds or chipmunk alarm calls are usually emitted in the presence of a predator.

These alarm calls can vary according to the type of predator as well. For instance, a chipping sound is usually emitted in the presence of a mammalian predator (like a raccoon). On the other hand, chucking sounds are emitted in the presence of an aerial predator. These sounds also differ in terms of length, frequency, and proximity. Chips and chucks are emitted when a chipmunk detects a predator from an elevated position. Trills are emitted when a chipmunk is being chased by a predator.

When a chipmunk hears these alarm calls, it will alter its foraging behavior as well. They become more alert and will try to return to their burrows. They will also gather less food in the process.

Here is a neat video from National Geographic that captured the audio of different chipmunk noises after the little guys were fitted with microphones!

You’ll also like this: Do Chipmunks Make Good Pets?