Like other members of the squirrel family, chipmunks can be highly susceptible to attacks from predators. Predation contributes significantly to the mortality rate for a chipmunk. Most chipmunks will not survive beyond their first year due to this very reason.

Predators that eat chipmunks vary across location and habitat and many chipmunks have established a set of predator specific alarm calls to help each other, and especially fellow family members escape attack.  Let’s take a look at some chipmunk species and which predators they need to watch out for. 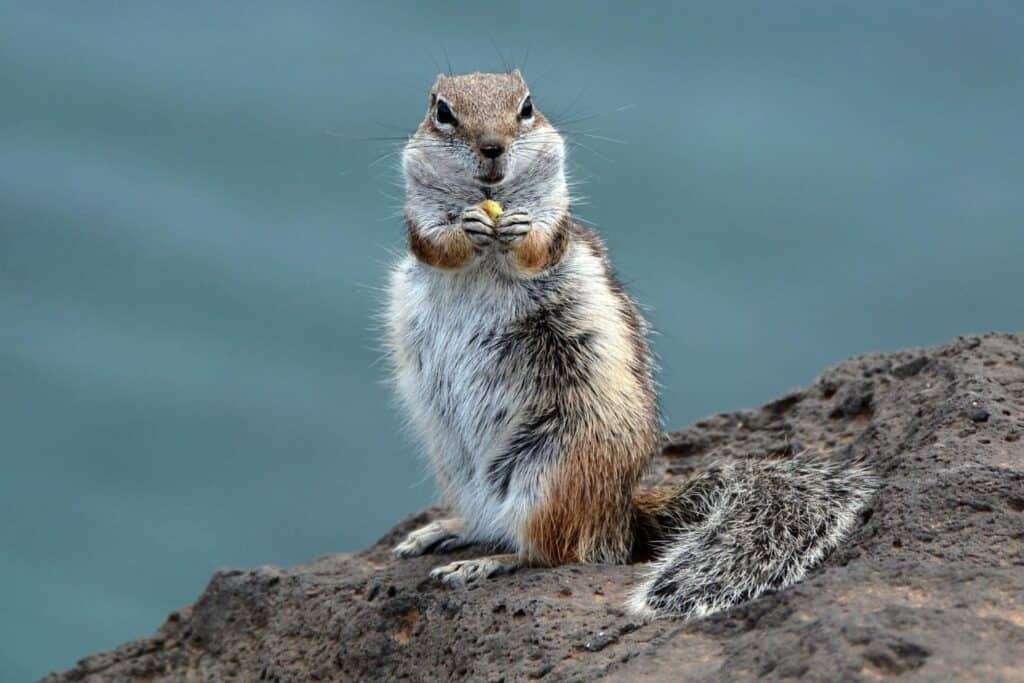 Note: All information below was obtained from the species specific entries at the Animal Diversity Web.

The Siberian chipmunk is vulnerable to attacks from animals like cats and weasels. They are also targeted by birds of prey. These chipmunks can protect themselves due to the color of their pelage. This allows them to blend into the background and remain undetected. They are also very agile and vigilant creatures and can escape attacks from predators by running to their burrows.

The Alpine chipmunk can only be found in the Sierra Nevada Mountains. They are present at high altitudes that range from 2300 m to 3900 m. The rocky habitat plays a vital role in the chipmunk’s survival against predators. Since there is no tree cover, they can also spot aerial predators from a distance and can seek refuge accordingly. These animals are mainly preyed upon by terrestrial mammals. Weasels, foxes, bobcats, and coyotes will often target these chipmunks. They are also targeted by birds of prey.

The California chipmunk is found in the mountains of Southern California (mainly San Jacinto and San Bernardino). It can also be found in the desert areas of Baja California and Sierra de San Francisco. There is very little information available on the predation of these animals, but they are likely to be preyed upon by carnivores such as foxes and coyotes. They may also be susceptible to attacks from hawks in the area.

The gray-collared chipmunk inhabits eastern and central Arizona. It can also be found in Southwest Mexico. Predators that eat gray-collared chipmunks include weasels, hawks, owls, martens, coyotes, snakes, and foxes. These chipmunks also become aggressive during the breeding season, and many of them get injured and die due to fights with other chipmunks.

However, more than predation, these chipmunks are also prone to dying from starvation. Seed crop failure and insufficient stores of food during hibernation can result in their death.

The Gray-footed chipmunks are frequently preyed upon by birds of prey as the Northern Goshawk. There rely on the cryptic coloring of their pelage against attacks from predators and can blend into forest backdrop.

These chipmunks can found in central and southern California. They inhabit lower altitude resins in the South Coast and can be found in the Transverse, Southern Sierra Nevada, and Peninsular areas. A variety of predators target them. These include bobcats, long-tailed weasels, gray foxes, coyotes, garter snakes, pacific rattlesnakes, sharp-shinned hawks, Cooper’s hawks, American badgers, great horned owls, gopher snakes, and domestic cats.

Predators that eat these chipmunks include terrestrial animals such as foxes, coyotes, bobcats, and weasels. They are also targeted by birds of prey such as hawks.

These chipmunks can found in Oregon, Nevada, and California. They usually inhabit areas having altitudes above 1500 m. These chipmunks are preyed upon by coyotes, snakes, badgers, and weasels. They are also targeted by birds of prey. Owls may also pose a threat to these chipmunks. However, since they are diurnal (while owls are nocturnal), the chances of predation are low.

The Yellow-pine chipmunk can be found in Southwestern Canada and the Northwestern United States. They are common in the states of Idaho, Oregon, Washington, northern Utah, northern Nevada, western Montana, and western Wyoming. They can also be found in the mountains of California. These chipmunks are preyed upon by terrestrial, as well as aerial predators. These include goshawks, coyotes, badgers, long-tailed weasels, bobcats, rattlesnakes, and sparrow hawks. They spend most of their time in their underground burrows, which protects them from predator attacks.

The Panamint chipmunk is limited to southwestern Nevada and southeastern California. Animals that prey upon these chipmunks include coyotes, weasels, bobcats, foxes, and birds of prey.

There are several predators that eat chipmunks. Among mammalian predators, animals such as foxes, coyotes, bobcats, weasels, and badgers will frequently prey on these animals. Aerial predators include goshawks, hawks, and owls. Reptiles such as rattlesnakes, gopher snakes, and garter snakes can also target these chipmunks.

Most chipmunk species have evolved to survive predator attacks through the cryptic coloring of their pelage. They are also agile and vigilant creatures and will escape a predator attack by seeking refuge in their burrows.