Sugar Gliders and Flying Squirrels are both cute little animals that are popular pets.  Sugar gliders look remarkably similar to the flying squirrels found in the US but in reality, these two animals are extremely different.  Let’s take a quick look at the differences between these two species. 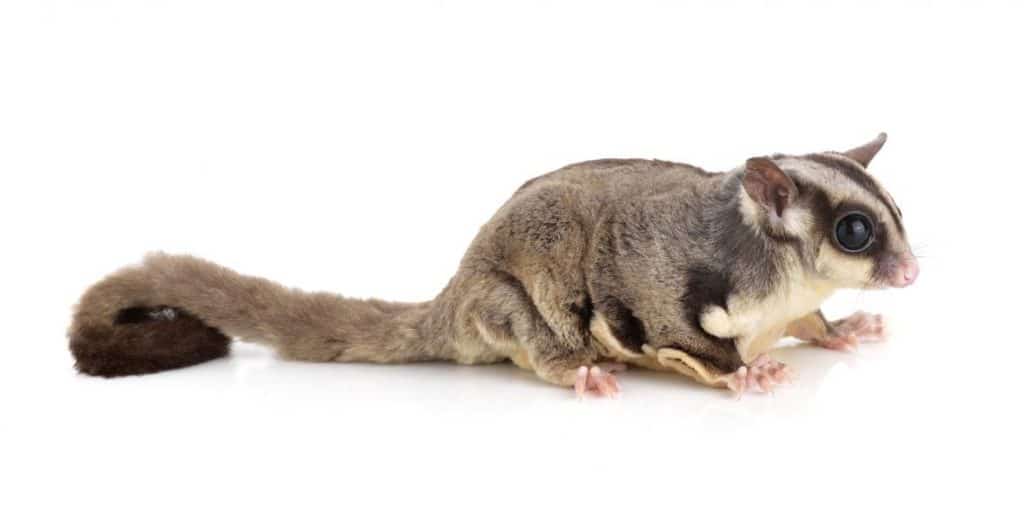 What is The Difference Between Sugar Gliders and Flying Squirrels?

Let’s start by taking a look at how physically similar these two species are.

Here is a short clip from the BBC about sugar gliders.

And here is a short clip from National Geographic about flying squirrels.

While both of these animals are small, cute and can glide great distances through the air they are actually extremely different.

The primary differences between Sugar Gliders and Flying Squirrels include:

Let’s take a look at these differences in more detail.

Where Do Sugar Gliders and Flying Squirrels Come From?

and this…
Giant Squirrels of the World: Some Of Them Even Fly!

One of the key differences between flying squirrels and sugar gliders is how they reproduce. Flying squirrels are placental mammals within the Sciuridae family. This means that their young ones live within the mother’s uterus before birth. Nourishment is provided via a specialized embryonic organ that is attached to the wall of the uterus. This is known as the placenta, hence the name – placental mammals. These mammals have long gestation times and give live birth once the embryo has fully developed.

In comparison to flying squirrels, sugar gliders are marsupial mammals within the Petauridae family (source).  This makes the Sugar Glider more closely related to a kangaroo than a flying squirrel.  Marsupials are pouched mammals that give live birth after very short gestation times. Newborns live inside a pouch-like opening in the mother and receives nourishment from the mother’s nipples until fully developed. Marsupial mammals give birth so early that they have a yolk-type placenta. This yolk-type placenta cannot provide adequate nourishment for a long time (as in the case of placental mammals).

The sugar glider may appear to be similar to the flying squirrel in appearance, but if you examine them up-close, then you will notice some differences. Both animals have a membrane that extends from the back legs to the front legs and allows them to glide or ‘fly’ across trees. However, as mentioned earlier, the female sugar glider also has a pouch for carrying the young. This is absent in the female flying squirrel.

Sugar gliders also have a dark grey stripe on their backs. Flying squirrels, on the other hand, will sport a variety of different pelages depending on the species.

They can also be found in a variety of sizes. For instance, the northern and southern flying squirrel is an average-sized mammal (275 to 342 mm and 285 mm respectively). However, there are also giant flying squirrels. These can be as large as a house cat (the Spotted Giant flying squirrel for example). The sugar glider, on the other hand, has a body length of 120 to 320 mm long.

One notable different between Flying Squirrels and Sugar Gliders is those big eyes that Sugar Gliders have. They are the definition of cute!

Sugar gliders and flying squirrels are also considered to be the product of convergent evolution (source). This means that the ancestors of marsupial mammals and the ancestors of placental mammals were likely to belong to the same family. However, the marsupial ancestors split from their placental ancestors during the mid-Jurassic period. These animals have evolved separately since then.

In spite of these geographical dissimilarities, flying squirrels and sugar gliders are said to evolve in a convergent manner. This means that they live in similar ecosystems and lead similar lifestyles. They also have very similar physical traits. For instance, they are both nocturnal in nature. They are also arboreal and will dwell in trees. Besides this, they also have large eyes that are able to collect light, enabling them to see in the dark.

Both animals are omnivores that will consume both plant and animal matter.

There are several major differences between flying squirrels and sugar gliders. Perhaps the most significant difference between these two animals is how they reproduce and give birth to their young. Their location and evolutionary diversity can also help you distinguish between these two mammals.