If you ever find yourself in Japan and you want to have a little squirrely fun, then head out to the woods and see if you can spot the flying squirrels!  It turns out that Japan has two types of flying squirrels, the Dwarf and the Giant, and I think they both are pretty interesting.

Let’s take a look at some facts about Japanese Flying Squirrels and see what makes them special. 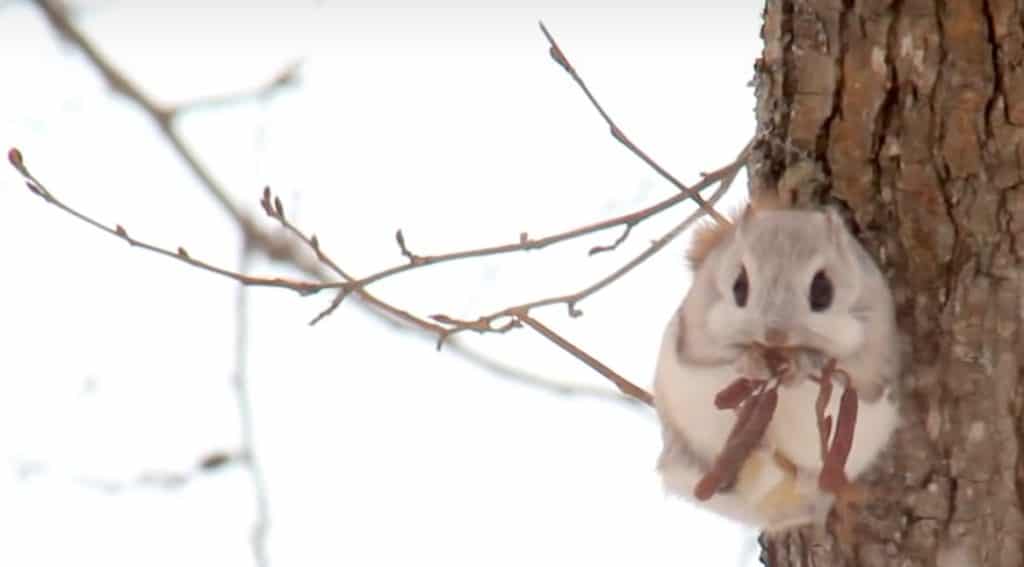 Let’s get the obvious stuff out of the way….These things are cute as heck!

The Japanese Dwarf is found in the forests of Honshu and Kyushu islands in Japan.  These animals grow to a length of about 8 inches and a weight of 150-220 grams (less than half a pound).

The name “Japanese Dwarf” is informal and I suspect it originated as a handy contrast to the name of its larger cousin.  The name “Dwarf” is a bit misleading as this squirrel weighs twice as much as it’s American cousin, the Southern Flying Squirrel.

Like other species of smaller flying squirrels, the Japanese Dwarf is a rather social animal and you can frequently find multiple squirrels in the same tree.

The Japanese Giant is found in the forests on Honshu, Shikoku and Kyushu islands in Japan as well as other parts of southern Asia.  These animals grow to a length of about 20 inches (longer if you include the tail) and a weight of 700-1,500 grams (roughly between 1-3 pounds).  The Japanese Giant is the largest member of the Tree Squirrel/Flying Squirrel Subfamily (Sciurinae)

Here is a look at one of these awesome guys gliding around!

Unlike their Dwarf cousins, the Giant is highly territorial.  I suspect that the territorial behavior is rooted in another odd characteristic of the Giant in that they appear to form monogamous mating pairs.  Most other species of squirrels mate opportunistically and form no lasting bonds.  These guys are different.

Speaking of mating, here is an interesting tidbit I picked up while researching this article….the male Japanese Giant squirrel shrinks his testicles to the point where they disappear when it is not mating season!  When mating season approaches he regrows his boys!

What I think is equally amazing is that we know this fact because one fine gentleman, Takeo Kawamichi, spent 977 nights observing squirrel testicles with a set of binoculars and taking copious amounts of highly detailed notes.

The world is truly a wonderful place.

What These Squirrels Have in Common

Although the Dwarf and Giant flying squirrels of Japan differ in size by a factor of 10, they still have quite a few things in common.

Like other species of flying squirrels, both Japanese Flying Squirrels are gliders instead of flyers.  Instead of wings, these squirrels have a patagium (skin membrane) that connects their limbs and turn them into living parachutes.

While most glides are short trips of 20-40 feet these squirrels can glide up to 300 feet.

You Have To Work To See Them

If you want to see either f these squirrels than you are going to have to make an effort.

Both species are nocturnal and spend almost their entire lives up in the trees. Most flying squirrels will not descend to the ground and tend to reside in hollow trees and branches during the day.

Additionally, these squirrels have a pelage that is silvery to buffy gray in color that makes for some pretty effective camouflage. They tend to blend into their environment which is useful in avoiding predators. If they detect a predator nearby (for instance, owls), they lie flat against the bark of a tree and are almost impossible to spot.

Most members of the squirrel family are omnivorous. The Japanese flying squirrels (both giants and dwarves) are largely herbivores by nature. Their diet is based on plant matter, and they consume pine seeds, nuts, flower buds, fruits, and the bark of some trees. The only animal matter they consume are insects, which is comparatively harmless (No offense meant to any insect lovers, of course).

The dietary preferences of the Japanese flyers is in stark contrast to the American Southern flyer which loves to dine on bird eggs and baby chicks.

Japanese flying squirrels are fascinating creatures that differ both in size, diet and behavior from their American cousins.

If anybody happens to be heading to Japan and needs a travelling buddy then hit me up…I would love to try to spot one of these guys in the wild!