Foxes are a interesting animals but, because they are shy and reclusive, folks have lots of questions about them.  One popular question about these animals is, “Are Foxes Pack Hunters?”

The answer is, “Foxes are not considered to be true pack hunters, unlike some other species of carnivores such as wolves, hyenas, and lions

While foxes may sometimes hunt in pairs or small groups, they are not known to coordinate their hunting efforts in the same way as true pack hunters. Pack hunting animals rely on cooperation to bring down large prey, but foxes tend to hunt smaller prey individually or in pairs.

Foxes use a variety of hunting techniques, including stalking, pouncing, and digging, to catch their food. Some fox species are also skilled at scavenging and will feed on dead animals 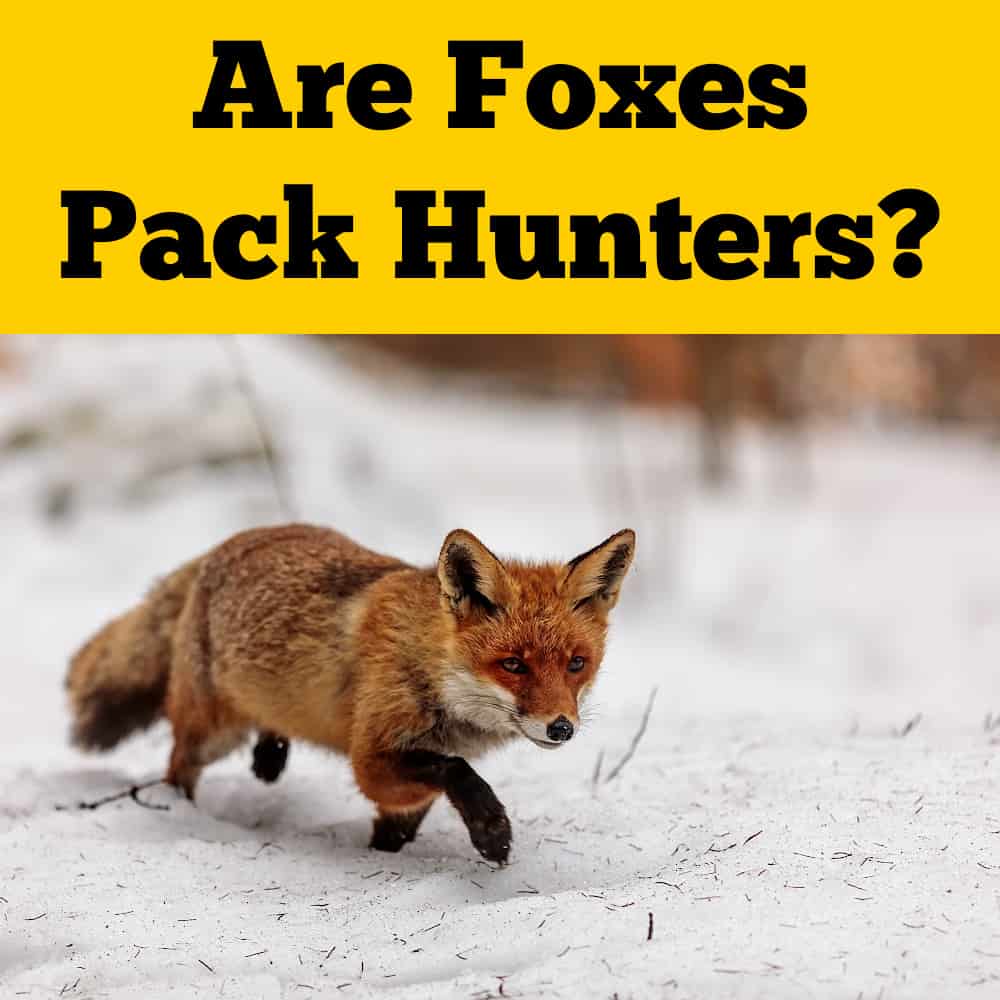 Despite their solitary nature, foxes do form strong social bonds with their mates and offspring. Adult foxes will often care for and feed their young until they are old enough to hunt for themselves.

What Do Foxes Eat?

Foxes are omnivorous and will eat a variety of different types of food.

Foxes hunt mice, rabbits, squirrels, birds, and insects. They will also eat any available fruits, berries and vegetables. Foxes scavenge for food by eating carrion or digging through garbage.

The animals that foxes hunt depends on the location and the availability of food. Foxes living in forests hunt rabbits or squirrels, while those living near open fields hunt for mice.

Foxes go after a variety of prey and will eat just about anything they can catch. Rodents (mice and rats) are a big part of a foxes diet so I appreciate having foxes in the neighborhood.

Foxes use their excellent vision, hearing and sense of smell to locate prey. Foxes have such a great sense of smell and hearing that they can easily find mice under layers of snow.

Once a fox locates a prey animal they will attempt to capture it by either stalking or chasing.

Foxes do most of their hunting during the twilight hours of dawn and dusk which is when their prey is active.  Foxes will also hunt during the day if there are prey species available. For example, I see foxes outside of my window during the day as it stalks my neighbor’s cat!

The two biggest factors that influence the hunting habits of foxes are the availability of prey and the time of year.

Foxes hunt more intensely and will pursue different animals, when their regular prey is scarce.  This can happen if there has been a decrease in forest mast production which results in a smaller squirrels population.

Foxes hunt more during the breeding season when they need to feed their offspring. Foxes will provide food for their pups for many months until the pups are able to hunt on their own.

Foxes are territorial animals that defend a specific area for hunting, mating, and raising young.  Foxes mark their territory using scent and use vocalizations to defend their territory.

The size of a fox’s territory varies depending upon:

Foxes sometimes overlapping territories with other foxes, particularly during the breeding season. The sharing of territories increases the chances of finding a mate.

Do Foxes Usually Live in Packs?

Although foxes are solitary animals they still interact with other foxes. Male and female foxes will often form a bond and establish a territory together.

Foxes often live in small family groups, consisting of a the bonded pare and their offspring. These family groups stay together for several months or even years.

Foxes live in packs for a few reasons including:

Living in a pack provides foxes with protection from predators. Adult foxes don’t have many natural predators but baby foxes are vulnerable to attack.

Group living also means that foxes can curl up together and stay warm on cold nights.
Pack life also has the advantage of making it easier to find food. Two foxes can cover more ground than one so they have a better chance of catching prey. If one fox makes a kill they will share any extra food with the pack.
Finally, living in a pack can provide foxes with social support. Foxes are long living, intelligent animals, and they appreciate the companionship of others.

“The Red Fox: An Intelligent and Adaptable Predator.” Wildlife Rehabilitation Society of Edmonton.