Foxes are beautiful animals that draw equal amounts of admiration and wonder.   One of the things people often wonder about is the social lives of these animals and, more specifically, are red foxes territorial?

The answer is usually, but not always. Red foxes are generally regarded as territorial animals that occupy well-defined and separated home ranges. Territories are sometimes occupied by family groups and individual or family territories will often overlap in areas of high populations and may be shared by multiple family units. 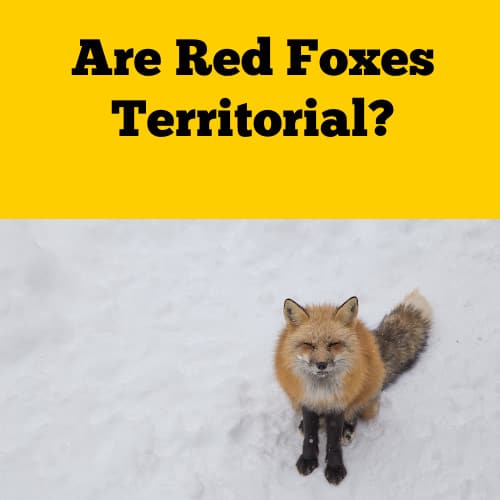 Most foxes will stay in a two- to three-square mile area when habitat conditions are favorable.

Do Foxes Fight over Territory?

Red foxes will sometimes fight over territory when both are of equal size and age. However, more often than not, foxes will tolerate each other if one is passing thorough the other’s home range or if the home range of two foxes overlap. When foxes do fight it is most often what is described as an aggressive “dance.”

When preparing to fight, both foxes start off by displaying a dominant body posture in an attempt to intimidate the other.

The two stand side-by-side with their heads pointed away from each other, ears pinned flat and mouths agape. Both arch their backs and curl their tails to one side. This allows both animals to assess each other and provide the opportunity for one to back down by displaying submissive behavior when one crawls away at an angle. If one does not submit, the two will turn to face each other and perform a “body shove” where they test each other’s strength. If neither fox backs down, a fight ensues.

The foxes will try to bite each other on the head and back of the neck as well as the rear end. Face and neck injuries are most common during the breeding season when the males are in competition for females.

Foxes will sometimes face each other, rear up and place their front paws on the others shoulders at roughly a 45-degree angle. While this maneuver is aptly named the foxtrot, it has nothing to do with the dance Henry Fox choreographed in 1914. Both animals attempt to push the other backwards while uttering shrill vocalizations referred to as “gekkering.”The winner is typically the one who first topples their opponent or causes the other to turn away.

The fight may become prolonged if no clear winner emerges and the fight ends with both animals lying on the ground, exhausted and screaming at each other. No matter how serious the fight looks, encounters typically result with no or only superficial injuries that heal quickly.

Because the fight is really just a highly ritualized display and allows the animals to establish dominance without mortal combat, serious injury is rare and one fox will almost always submit before it goes too far.

A fox’s home range can vary greatly from under 20 to over 5000 acres and territory size will vary according to population densities and food availability.

An article published in the Journal of Mammalogy in 2008 reported a team of Bristol University biologists found males held an advantage in both territory defense and acquisition. Research generally focuses on foxes with a stable home range, however some foxes do not display territoriality. These transient foxes travel freely between areas and typically move over a wide range.

A study published by Springer Nature Switzerland AG, “Home ranges in red fox: territoriality diminishes with increasing area,” found no significant correlation between the mean distance traveled and the size of the home range.

Foxes mark their territorial boundaries with chemical markers, using scat and urine to leave scent on visually conspicuous objects that include rocks, stumps, large tufts of grass and man-made objects. Another study, “Red foxes (Vulpes vulpes) use rabbit (Oryctolagus cuniculus) scent marks as territorial marking site,” found foxes increased scent-marking behaviors as well as the detectability of their marks in areas where rabbit densities were higher. This tends to at least suggest that foxes will make more of an aggressive effort to defend their territory from competitors when food resources are greater by increasing the amount and the detectability of scent markings.

Journal of Zoology: A spatial analysis of a population of red fox (Vulpes vulpes) in the Dutch coastal dune area

How Far Do Red Foxes Travel From Their Dens at Night?

Foxes may travel only a few hundred yards or as far as 10 miles a night in search of food, especially during the months young are being raised.

A 2014 study performed at Brighton University found a single male fox traveled an average of 195 miles a month, or 6.5 miles per night, from December to January. However, if hunting conditions are very good, many foxes will travel less than one square mile a night.

How Long Do Foxes Stay in One Area?

Many foxes spending their entire lives in the same territory and most foxes will stay in there home range as long as there are viable resources and mates.

Fox babies, referred to as kits or pups, remain with their parents for approximately seven months and then go out looking to set up their own home ranges. While female red foxes will typically stay closer to the place they were born, males are known to travel over 200 miles away from their birth dens.

For adults, displacement can happen in more urbanized areas where habitat changes occur and requires the foxes to find a new home range.