Red foxes are wonderful animals that evoke a lot of curiosity among people.  Daytime spotting of foxes is not common but does happen from time to time.  These infrequent sightings gets people wondering about the sleeping patterns of foxes.

The answer is, “Red fox behavior is predominantly nocturnal over much of their range during most of the year. However, red foxes do have a tendency towards crepuscular activity and will often display diurnal activity as well.”

Let’s look at this answer in a little more detail to get a better understanding of red fox behaviors. 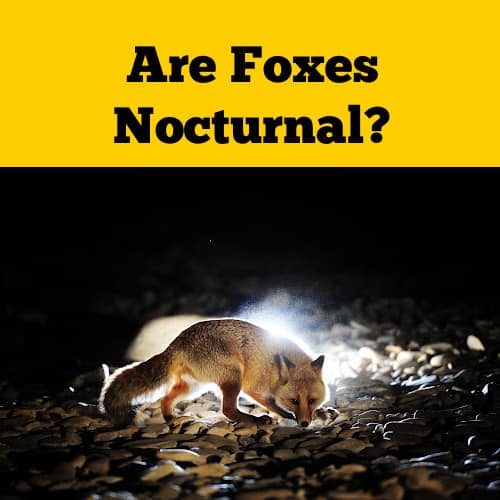 It is often difficult to generalize about animal activity as behavior is many times dependent on a host of mitigating factors. These factors can include the habitat, weather and season as well as the individual animal’s age, sex and personal traits. This is especially true of the red fox.

One of the ways animal behavior is classified is by what time of day a species is most active. Following are the four main classifications and two subclassifications of animal activity:

1) Diurnal animals are primarily active during daylight hours.
2) Nocturnal species are active mainly under the cover of darkness.
3) Crepuscular animals are active at dawn and dusk. Crepuscular animals fall into the two sub-classifications of matutinal that are most active at dawn and vespertine that are most active in the evening hours.
4) Cathemeral animals distribute their time throughout the day and night.

While some creatures fit nicely into one of the first three categories, most animals exhibit behaviors of at least two classifications and this helps to understand the daytime and nighttime activities of red foxes.

Depending on the season and the region, red-fox activity may be crepuscular, diurnal, nocturnal or cathemeral.

What Time do Foxes Come Out at Night?

When foxes are behaving nocturnally they begin emerging from their dens in the late afternoon hours, typically an hour before dusk just as it begins to get dark. A1986 study of 176 radio-collared foxes found 95 percent of the animals typically remained in their dens from 2 1/2 hours after sunrise to just before sunset.

This demonstrates that most red foxes express both Crepuscular and nocturnal behavior, becoming active in the early evening and staying out just past dawn of the next day.

Do Foxes Come Out Every Night?

While they do leave their burrows each night, foxes hunt out of need to survive and not for sport.

A fox usually only makes one or two kills a week so it may not come out to hunt every night if it has made a large kill recently. However, a fox will make multiple kills in a night if given the opportunity. In these cases the fox will cache their food buy burying it and go to it to feed when needed.

However, the fox will usually still come out at night to relive itself and drink.

What do You do if You See a Fox at Night?

Like most wild animals, foxes are not typically dangerous and usually the only exception to this is if a fox has contracted rabies. Rabies is a virus that infects the central nervous system and is spread from being bitten or sometimes scratched by an infected animal.

One telltale sign of a rabid animal is that it will often show aggression. This is an obvious sign of infection in animals that are typically shy, such as foxes, but is not really a cause for concern.

To put things into perspective, reports of non-rabid foxes attacking people are practically nonexistent, whereas the National Health Institute reports over ten people a day in the U.S. are treated for dog bites.

However, a fox will defend itself if it feels threatened so if you see a fox at night enjoy watching it from a distance. The fox will most likely run off as soon as it notices you.

Why are Red Foxes Nocturnal?

Some people believe the fox’s nocturnal behavior may be a habit forced on it by its continual persecution by humans.

However, the fact remains that foxes nocturnal behavior centers on the prey animals they rely on most for food are most active at night, such as mice, voles and rabbits.

Foxes have been observed actively tracking animals by sight, sound and smell at dusk, dawn and during the dark of night.

What do Foxes do at Night?

Foxes come out at night primarily to hunt for food and their most common prey are field voles, feral pigeons and small birds. However, foxes have a varied diet and will eat virtually any insect, animal or bird small enough for them to catch and kill. This includes worms, beetles, moth larvae and larval as well as adult crane flies.

Still, even with all of their dietary options, foxes often spend the entire night hunting and may only find a few bugs to show for their efforts.

Do Foxes Ever Come Out During the Day?

Foxes will come out during daylight hours at any time of the day if hungry.

Red foxes remain active throughout the year and neither hibernate nor torpor. Foxes tend to become more active during the day in the winter months in the northern latitudes due to the colder temperatures and the increased need for calories in cold weather.

Red foxes also express more diurnal behavior during mating season, especially if they are looking for a new mate.

What Does it Mean if Foxes are Out During the Day?

It has been claimed that a fox may come out during daylight hours only if it is diseased, however, this is not true. Especially in urban areas, diurnal activity by foxes is much more common than people realize.

Even though foxes can be prone to a variety of the same diseases that occur in domestic dogs, such as rabies, distemper, parvo virus and sarcoptic mange, all of which are invariably fatal, just being active during the day does not indicate the fox is sick. It is important to understand that diseased animals do not survive for very long in the wild and as such the vast majority of both urban and rural red foxes are perfectly healthy.

Are Foxes Dangerous During the Day

Unless the animal is sick, red foxes are not any more dangerous to people during the day then they are at night.

Foxes are typically very shy creatures that have a natural fear of people and are easily scared off by unnatural noises. In some urban settings it is common to see a fox come out to search for food during daylight hours. This is typically because the animals have been pushed out of their natural habitat by human encroachment, such as urban sprawl and housing expansion, and are forced to adapt new hunting strategies in order to survive.

If a fox does not immediately retreat, it may mean the fox has gotten used to living near people. Some foxes get so comfortable around humans the animals have been known to raid chicken coups in broad daylight. However, be extremely cautious if a fox shows signs of aggression as it can be an indication the fox is rabid.

Where do Foxes go During the Day?

Foxes with predominately nocturnal behavior spend the majority of the daytime hours in their dens sleeping and caring for their young.

In situations where food is scarce they will come out to hunt, especially in urban areas where their natural prey has become scarce. In some extreme cases foxes can turn to preying on domestic animals. However, this is rare as studies have shown even house cats can readily stand up to a red fox.