Red foxes have long been thought to be a monogamous species, but do red foxes mate for life? Studies have shown this is not always the case. Red foxes do not form large packs that live and work together like some members of the canid family, such as wolves, but do form family groups for part of the year. 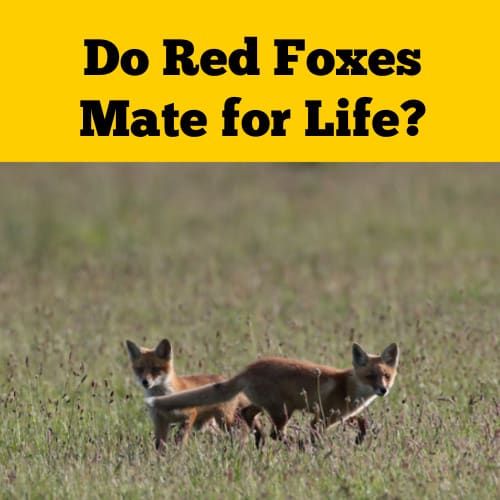 Red foxes live as solitary animals much of the time and mating behavior can vary substantially based on a number of factors.

True monogamy implies a single mate and this generally results in a low variability in reproductive success and provides limited opportunity for sexual selection.

Males and females are often monogamous, however of all red foxes studied in the wild about half of the males express polygynous, or polygamous, behavior.

An article published in the Journal of Mammalogy, “Body Mass, Territory Size, and Life-History Tactics in a Socially Monogamous Canid, the Red Fox Vulpes Vulpes,” reported that even monogamous males have to compete with other males to acquire a mate and territory, or both.

A study published in the Journal of Behavioral Ecology, “Polygynandry in a Red Fox Population,” found monogamy did exist within groups made up of a dominant mated pair and one or more related, but non-reproducing, subordinate animals.

Like many other canids, red foxes are capable of having mixed litters with kits from the same litter having different sires. The study observed genetic monogamy, meaning all offspring having the same two parents, was extremely rare. The study showed, via DNA sampling, that both males and females mated with multiple partners that produced about 53 percent of mixed paternity across 16 litters.

While a female may breed with a number of males, she will form a bond with only one “mate.”

Sometimes two females mated to the same male will share a den.

In what is known as monogamous-polygynous cooperative breeding, male/female pairs sometimes use a non-breeding female to help raise their young. However, neither of these behaviors is very common and it is much more common for a single male to seek additional mating outside of the group.

Home ranges play a huge part in breeding behavior and opportunities and both male and female red foxes remain in the same home range for their entire lives.

Home ranges are occupied by an adult male and one or more adult females, with each female having her own range and litters of kits. Individual foxes and family groups will have one main den with other secondary dens scatted throughout the home range that can be used as resting sites or in the event of an emergency, such as a flood.

Dens are usually taken over from other animals, such as rabbits, and enlarged for rearing young. The same den is often used for a number of years. Trails through the home range connect the dens with hunting grounds and food storage areas.

Another study published in the Journal of Mammalogy, “Differential Investment in Mating by Red Foxes,” found the home range of polygynous males often overlap the home ranges of multiple females and males will travel further than normal immediately after the peak of mating season looking for additional females.

Home ranges can vary from as little as 10 acres to as large as 10,000 acres, depending on resources and physical barriers. The larger the home range the more opportunities there may be for mating partners. At certain times of the year adjacent home ranges may overlap and those ranges with valuable resources may be aggressively defended.

Female red foxes have an annual estrous period that lasts from one to six days and males have a fecundity cycle occurring from November to March.

While the exact time of breeding varies greatly across the fox’s geographic range, mating typically takes place in February through April in the northern regions, during January or February in the central latitudes and during December or January in the southernmost areas.

Do Red Foxes Stay Together as a Family?

Red fox pairs cooperate to care for their pups.

The female remains in or around the den from just before giving birth until the pups are weaned. The male will bring food to his mate, but does not go into the maternity den.

Gestation is between 49 and 56 days and litters consist of an average of five, but can vary between one and 13 pups. Young red foxes remain in the den for four to five weeks. The babies are nursed by their mother for 55 to 70 days and are weaned by both parents and older siblings that provide solid foods.

The kits remain with their mother until at least the fall of their birth year and females pup will sometimes remain longer. Otherwise, kits will disperse to find their own territories and sexual maturity is reached by 10 months. The male will typically go off on his own after the young are raised and return to his mate(s) during the next breeding cycle.

Do Red Foxes Take New Mates if Their Mate Dies?

Many fox species are strictly monogamous and some, like the gray fox, will not take a new mate immediately if one of the pair should die. However, the red fox has no morning period and will take a new mate the following breeding season if it’s mate dies.