Foxes are shy animals which makes it difficult to keep track of them through the seasons.  Many people wonder about the winter behavior and activity of foxes and specifically ask, “Do foxes hibernate in winter?”

The answer is, “No, foxes do not hibernate in winter.  Foxes have many adaptations that help them survive winter with the two largest being the development of a thicker fur coat and the adaptation of their diet.

Let’s look at these adaptations in more detail as well as some other interesting facts about fox behavior in the winter. 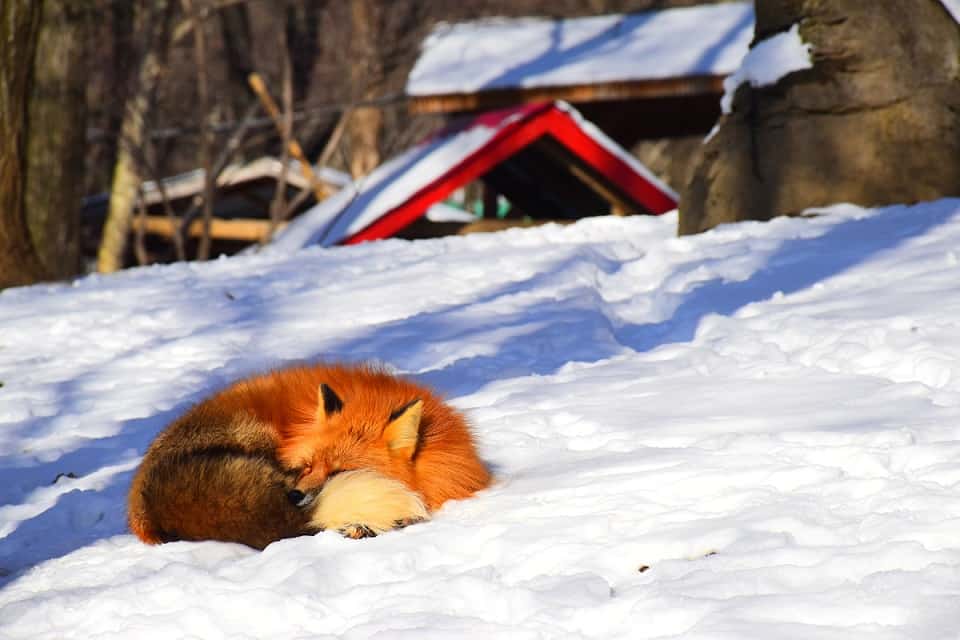 How do Foxes Survive in the Cold?

Since foxes don’t hibernate, they keep up their normal routine of hunting, sleeping and playing in the winter. They are able to stay active and thrive in the winter through the following adaptations:

In areas that have cold weather and snow during the winter, foxes grow long coats and even have fur on their footpads. The fur on their feet will help protect them from the cold and also allow the fox to walk on top of the slippery snow.

Surprisingly, foxes do not depend upon the protection of a warm den during the winter but will instead curl up in a ball and wrap their bushy tail around their face. This keeps their heat from escaping their body.

During extreme weather, the fox will burrow down into the snow, under a rock crevice, or even under a large log to protect themselves from the cold and wind.

How Do Foxes Hunt During the Winter?

The diet of foxes changes throughout the year.  In the summer when vegetation is plentiful foxes will also eat berries and insects.  However, once winter comes and vegetation and insects are less available, foxes will turn to hunting other animals to secure meals.

The red fox, which is the most common fox in the USA, can hear low-frequency sounds up to 100 feet away. The ability to track prey based upon sound instead of sight makes them excellent winter hunters.

Foxes eat mostly small rodents and rabbits during the winter and these animals often burrow around under the snow looking for food. The fox walks stealthily along the top of the snow listening for mice and voles who are searching for seeds or berries. When the fox hears them they spring into the air and plunge themselves into the snow!

Cache: How Foxes Store Food During The Winter

Uneaten prey is often buried or hidden to save for later. This is called caching. Think about your dog burying a bone in the garden.

Foxes scatter cache which is what grey squirrels do as well. They will hide food in different locations. This is helpful because if the food is found by other animals they don’t lose all their cache.

Like other canids, foxes have a specialization that assists them in winter.  Countercurrent heat exchange keeps the paws at a lower temperature than the main body. This helps minimize heat loss.

Red foxes live either independently or in small family units consisting of male, female, and young. Sometimes an older female also lives and hunts with them.

Grey foxes tend to be more solitary except when raising kits. During winter they pair up and make a den in a hollow log or underbrush. Grey foxes can climb trees and have even been known to make a den ten feet above the ground in a tree.

During winter young males who were born the previous winter seek to find new territory. This is a dangerous time for them because if they enter an inhabited territory they may be attacked.

Winter is Breeding Season for Foxes

It turns out that not only do foxes maintain their normal activity during winter but that they also use the season for breeding.

Foxes will mate during the months of January and February. Gestation takes about fifty days and the kits are born during March and April.

Foxes will dig a den to help keep the babies warm. Baby animals can not thermoregulate and depend on a warm den and their parents to keep them warm. Thermoregulation means making your own body heat.

During this time the male will hunt and bring back food for the female or vixen.

Don’t miss this: Do Red Foxes Mate for Life?

Foxes stay extremely active during the winter and do not hibernate. Foxes are able to stay active in the winter by growing a thicker coat, hunting rodents who are active under the snow, saving food in a cache, and having special physiological adaptations.