If you are wondering about How Long Do Red Foxes Live then you should find this article helpful!

The quick answer is, “On average, red foxes will live for about four years although there are documented cases of them living as long as nine years under optimal conditions.”

Red foxes are beautiful animals whose population can thrive when food is plentiful. I have recently started trying to watch a family of foxes in my neighborhood and catching glimpses of them in the evening.

My occasional sightings of these animals got me wondering about whether I will be watching the same foxes for years to come or are their lifespans so short that they will be quickly replaced by their pups. Here is some of what I have found out. 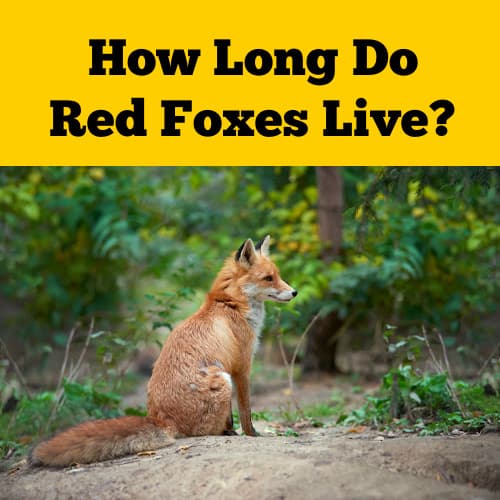 What is the Lifespan of a Red Fox in the Wild?

“Life span” and “life expectancy” are often used interchangeably, but they have different meanings.

So, how long do red foxes live in the wild? The average life expectancy of a red fox in the wild is five years, but the life span of a wild red fox is two to six years.

This is because nature is a brutal taskmaster and subjects red foxes to many trials and tribulations that vary depending on their age and where they live. The harsh reality is, in the wild, red foxes barely have a chance. While wild red foxes have been known to reach the ripe old age of nine-years old, this is very rare and many do not even survive to reach two years of age.

Aside from being in the lower end of the food chain, making them prime targets for other carnivores, red foxes are subject to a host of threats beginning at birth.

Mortality as a Pup

The first year of a fox’s life poses the greatest threat to their survival. Approximately half of all red foxes do not survive their first year of life do to a plethora of dangers.

Fox pups, also called cubs or kits, are born blind and can’t see for their first 12-14 days. This makes them the easiest of targets for predators if their parents should have to leave them unattended in the den to go out to hunt.

Kits sometimes drown if the den should flood during a storm. If the mother senses danger she will attempt to move her babies to a safer place. However, she can only carry one or two kits at a time and this can sometimes results in one or more being left behind. Many kits also die from starvation, parasites or disease.

Mortality as a One to Two Year Old

Foxes that survive their first two years usually go on to live to be five or six years old. This is because they have made it through the hardest stages of learning life’s lessons of survival.

The biggest threat to foxes in this age range are still larger predators, starvation and diseases like rabies. Red foxes are also susceptible to sarcoptic mange caused by mites that burrow under the skin and result in intense itching. This can causes the animal to scratch so much that the majority of its hair falls out and incessant scratching can lead to skin infections that can result in death.

Older foxes are called clever for good reason as they have somehow managed to survive food shortages, natural disasters and learned how to evade larger predators.

While foxes over two-years old still face all the dangers that younger ones do, a fair majority of mature foxes die of starvation when the get too old and lose their ability to hunt effectively.

Because they have all the benefits of any other domesticated animal, such as being kept safe from predators, quality veterinarian care, the companionship of their owners and never knowing hunger, well cared for red foxes can live to be as much as 15 years old in the best environments.

How Can You Tell How Old a Fox is?

With captive or domesticated red foxes, veterinarians can make an educated guess of a fox’s age similarly to estimating the age of a dog, These methods include tooth wear, body weight and length, cranial dimensions, degree of fusion of cranial sutures and development of the elevated bony ridge on the skull called the sagittal crest.

While there is really no way to tell how old a red fox is in the wild by casual observation, aside from guessing based on the animal’s overall size and body configuration, the age of a wild red fox can be reliably determined by examine the roots of a canine tooth post mortem. This is done by counting the dentine layers on longitudinally sanded canine roots, similar to counting the rings on a tree that has been cut down.