Foxes are one the most recognizable animals across the world. But despite the fox’s fame, there is still one question people still seem to ask. What does the fox say? Do foxes howl?

The answer is, “No, foxes do not howl but they do make a variety of noises that include; barks, screams, growling, and gekkering.”

Let us take a closer look and listen at some of these fox noises to understand what they mean and how they are used. 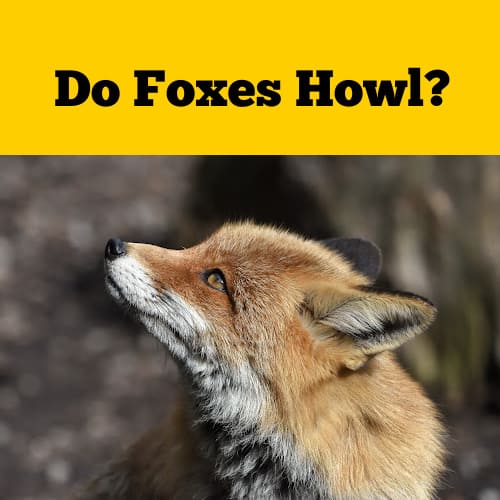 The fox howl seems to be a point of confusion. Many people online have posted videos described as foxes howling when they are actually screaming or barking.

While the screams and barks of foxes are certainly loud and distinctive, they do not come close to the sound of a true howl like those made by wolves.

A key differentiator between the screams of a fox and the howls of a wolf is the duration and tonal quality of the noise. A true howl howl is drawn out, lasts many seconds and includes several different notes as the howl progresses.  In contrast, a fox’s scream sound is a short, compact burst of sound that only lasts for a second.

In the video below, the fox is actually screaming. When the fox screams like this it is usually during mating seasons which occurs mating  from December to March. This fox is letting out a mating call.

Typically only the female foxes (vixens) emit screams and, if male fox that is interested will return the call with a bark back. It is also important to note however that while mostly females make this noise the male is also capable of doing such.

Another point of confusion for many people when they hear a fox is the alarm bark. The alarm bark is used by foxes when there is something nearby and a fox feels the need to alert the other foxes of the possible danger nearby.

Below is a great example of a fox bark on YouTube which someone has labeled as a howl.

This clip clearly shows an alarm bark. We know this because of two thing:

Given all of these examples above it is clear to see that even though it might sound like it at times the fox does not howl.

Another noise that foxes make is the growl. Whenever you hear this sound this means the fox is about to defend its territory from either another rival fox or a predator that the fox thinks it can take on. The foxes growl is very similar to the growls of many other canines and is the lowest pitched sound a fox can make.

Watch this video to hear what the foxes’ growl sounds like!

This is one noise that will never be confused with a howl. When foxes start gekkering it is a very unique sound and is only happening for one reason and that is fighting.

When foxes are gekkering it means they are throwing down regardless of whether it is playful or not they will start gekkering. Gekkering is best described as a fast sequence of yelps and squeaks and sounds a little like a small dog barking repeatedly at the mailman.

A good example of geckering can be seen here in this video in which these two foxes are recorded having a playful dispute.

Now that we have gone over some common fox noises and the misconceptions behind them it is safe to say one thing. Foxes do not howl. If you want to listen to a true real howl then listen to this amazing howls from a pack of wolves below.