When I first started writing these squirrel articles I kept getting confused when I was reading about red squirrels.  I was seeing contradictory information about these things and was having a hard time understanding why some people are highly passionate about them.

And then I figured it out.

It turns out that there are three different types of squirrels that are commonly referred to as “Red Squirrels” and there are significant differences between them.

The Three Species of Red Squirrels

The three species of squirrels are:

Once you know what to look for these guys are really easy to tell apart.

This is the squirrel that everyone is making a fuss about!

The Eurasian red squirrel is found across Europe and parts of Asia.  These squirrels have fur that can range in color from pure red to pure black.  Pure red squirrels are found in Great Britain while populations of pure back squirrels can be found in southern Italy.

The pure red squirrels are beloved in Great Britain but that are quickly dying out.  Massive preservation efforts are underway to try to save these red squirrels.

More information about why these squirrels are threatened and the efforts to save them are given below.

The American Red Squirrel is one of three species that are generically called “Pine Squirrels”.  These squirrels are abundant across North America with populations in the American northeast, the Rocky Mountains and all across Canada.

While the Eurasian and American Red Squirrels share a similar name they are quite difference in appearance and behavior.  Greater detail on these differences is provided at the end of this list.

The Fox squirrel is typically found in the eastern United States and Canada.  This squirrel has a lot of red in its fur and many people will call this guy a red squirrel.

The second way is by looking at the ears.  Eurasian red squirrels have tufts on the tips of their ears while American reds do not. 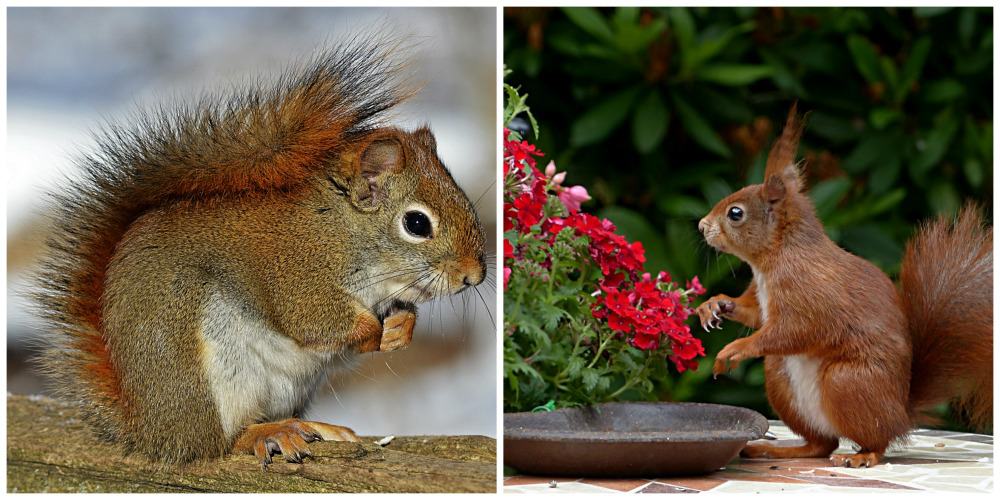 Another major difference between these two squirrels is their behavior towards other animals.  Eurasian reds are non-territorial and will have overlapping ranges with other squirrels while American reds are extremely territorial and actively defend their ranges against intruders.

The difference in behavior between these animals is due to how they store food.  Both of these species stash away food for winter months as neither species hibernates. The Eurasian scatters the food caches in multiple locations throughout the forest.  The American creates a MASSIVE central stash called a midden which it defends with its life.

Grey squirrels from America were introduced to Great Britain in the 1800s and the red squirrel population has been dropping ever since.  At one time the UK had an estimated population of red squirrels of about 3.5 million.  That number is now down to about 120,000.

Red and Grey squirrels directly compete for food and nesting sites.  Grey squirrels are bigger, stronger and, some studies suggest, smarter than their red rivals. The squirrels that best compete are the ones that survive.

To make things worse, Grey squirrels are carriers of the parapoxvirus (Squirrel Pox).  The virus does not impact the health of Grey squirrels but is deadly to Reds.

There are many preservation groups working to restore the population of the reds and the population in Scotland appears to have stabilized.  The Scottish success is suspected to have been helped through an unusual partner, the Pine Marten.

A Pine Marten is a cat sized weasel and, hundreds of years ago, was one of the most common mammalian predators in the UK.  However, the species was almost wiped out of the UK through deforestation and hunting.  Recent restoration efforts are establishing viable, healthy populations in Scotland and other portions of the UK.

General references used for this article include: