Hawks are amazing and beautiful predators that are essential in nature’s food web.  One part of the food web is the role that squirrels play in the diet of hawks.  If you have ever wondered, “Do Hawks Eat Squirrels?” then this article will help you understand that:

Yes, hawks do eat squirrels.  Hawks are one of the top predators of squirrels and the species that eats the most squirrels is the Red Tailed Hawk.

Let’s take a closer look at the differences in the types of hawks that live in the United States to gain a better understanding of their respective diets. 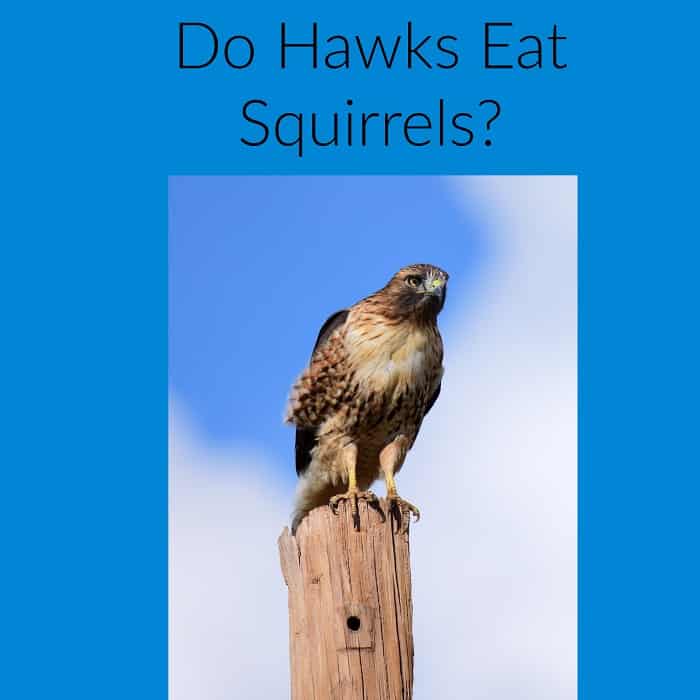 Hawks belong to the class of birds known as Raptors and there are two general types of hawks, Accipiters and Buteos.

Bueto Hawks are larger than Accipiters (source) and some of the more populous species include:

In general, buteo hawks are large, powerful and specialize in hunting small mammals.

Accipiter Hawks include species such as:

In general, the smaller accipiter hawks are fast moving aerial specialist that hunt by snatching other birds from mid-air or plucking them from your bird feeders.

All types of hawks are opportunistic predators and will eat whatever they can catch in their environment so if an accipiter thinks it can catch a squirrel then it will not turn down the meal.

The largest of the accipiter hawks, the Northern Goshawk, bridges both worlds and appears to hunt birds and mammals equally (source).

The Red Tailed Hawk is the most common hawk in the United States and it has a ferocious appetite for squirrels (source).  Approximately 80% of a Red Tail Hawk’s diet consists of small rodents such as squirrels.

Of course, like most things in nature, there is much variation is the relationship between species.  There are at least 14 sub-species of Red Tail Hawks and many more species of squirrels so making blanket statements about the exact percentage of squirrels that makes up a Red Tail Hawk’s diet is, at best, a ball park estimate.

However, it is safe to say that Red Tail Hawks are one of the major predators of squirrels.

One interesting study I found took place in Alberta, Canada from 1965-1968 and studied he impact of Red Tail Hawks (subspecies was not identified) upon local prey species (source).

Because Red Tail Hawks are such excellent squirrel hunters many people engaged in Falconry will use them for this very purpose.

Below is an amazing video showing the interaction between a Falconer and his Red Tailed Hawk as they go squirrel hunting.

Squirrels have developed a number of defense mechanisms to try to escape aerial predators but the efficacy of the mechanisms is questionable.

When squirrels spot a hawk they will make specialized sounds to warn other squirrels.

It is also speculated that the crazy, erratic running patterns squirrels make through open spaces is an attempt to prevent a hawk from locking onto their location for a dive bomb attack.

Given the percentage of squirrels that get eaten by hawks I have to think that these defenses are not very effective!

We have established that hawks eat squirrels because hawks are opportunistic predators. But, what else do hawks eat? You may find it interesting to know that, besides squirrels, hawks also eat snakes, lizards, rabbits, rats, voles, songbirds, raccoons, frogs, and even rattlesnakes!

That’s not even the entire list! Hawks eat a variety of animals but have you ever wondered, “What eats hawks?”

Surprisingly, larger hawks eat smaller hawks. I know that hawks are predatory birds but I was certainly surprised to learn that they eat their own kind!

You may also find it interesting to learn that eagles and some owls love to eat hawks. So, hawks are not at the top of their food chain. They may prey on smaller animals but there are plenty of larger animals that will make hawks watch their backs!

Well, the truth is out. Hawks love to eat squirrels! In fact, I walked out of my front door this morning and accidently interrupted a hawk’s attack. There was a large hawk that had swooped down to catch a squirrel or a rabbit and I scared him off.

One point for me. Zero for Mr. Hawk.