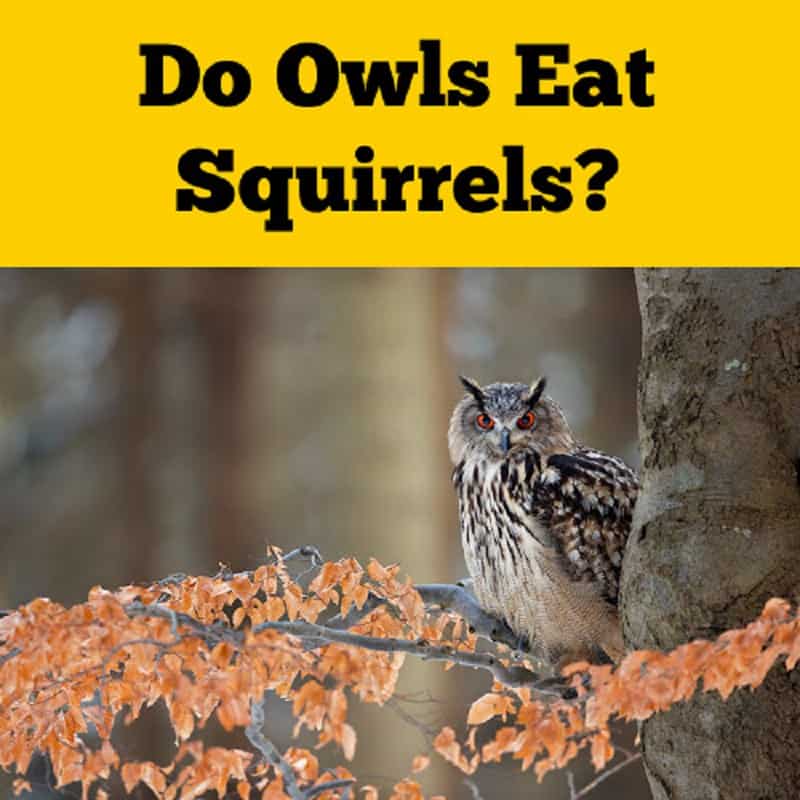 Are Owls Predators of Squirrels?

However, here is the thing: That opportunity may not arise very often.

Most types of squirrels are primarily active during the day. Most owl species, of course, are more active at night. Thus, the owl is less likely to encounter a squirrel. Any of these species might be seen during the day, but it isn’t likely. Still, many owls will remain active until shortly after dawn, giving them time to potentially bag a squirrel.

It turns out that the primary avian predator of squirrels are actually hawks.

There are only two species of owl that will hunt primarily in the daytime. These are the Northern Hawk Owl and the Northern Pygmy Owl. Both of these birds have hunting habits that are more similar to those of a Hawk or an Eagle. This study indicates that the majority of the northern pygmy owl’s diet consists of other birds, so squirrels probably aren’t a first-choice prey item for them. As for the Northern Hawk Owl , this study indicates that most of its diet consists of snowshoe hares and smaller rodents like voles and lemmings.

While most squirrels are active during the day (i.e., diurnal), there are two exceptions. These would be the northern and southern flying squirrels, which are very similar to one another. Most people don’t tend to see flying squirrels, but they are actually quite common. Because they mainly move about at night, you aren’t likely to see them by random chance.

You may have seen owl decoys for sale, as they are commonly used to scare away pests. Squirrels are among those animals which will tend to avoid an owl decoy. This tells us that all squirrels know and understand the threat posed by an owl. So, we can definitely assume that squirrels are eaten by owls on a regular basis. That being said, it seems that most owls will be more likely to eat another bird…including a smaller owl. These kinds of birds frequently engage in cannibalism, eating one another with surprising frequency.

If you live in a rural or semi-wild kind of area, you might have considered the possibility of introducing predators (like owls) as a way to control rodent populations or other pests. While this isn’t a bad concept, owls wouldn’t be the best choice for squirrel control. While they would certainly kill a few, they wouldn’t be sufficient to control a large population. Large, non-poisonous snakes (like black rat snakes) or hawks would be better choices.

That being said, introducing owls or encouraging their breeding would be a good solution if you have a rat problem. Rats, unlike squirrels, are mainly nocturnal creatures. That means that an owl will have no problem killing loads of them for you. Unfortunately, though, urban dwellers may have to resort to poison if they have a runaway squirrel problem.

This isn’t exactly an appetizing topic, but let’s discuss the subject of dead squirrels. One would think that an owl would be perfectly happy to scavenge a dead squirrel. However, this isn’t usually the case. Owls have not normally been known to scavenge dead animals of any kind. A few exceptions are known, however, so it seems that an owl might do this if they are hungry enough and if no live prey is available.

It seems that the larger species of owl are more likely to engage in scavenging behavior, as these owls have been known to frequently scavenge fresh roadkill. This makes sense because it takes more food to keep a larger bird alive and healthy, so they can’t be quite as picky. They have been known to scavenge rabbits, so a squirrel certainly wouldn’t be out of the question.

The answer to this question is not a simple one, as we said from the start. However, in most cases, we can say that squirrels are not a frequent prey item for owls. The fact that they are active at different times makes it less likely for these animals to meet one another, with only four species falling outside this pattern.

Still, it seems that nocturnal flying squirrels are very frequently eaten by owls. This tells us that owls have no problem killing or eating squirrels as long as the opportunity is there. Research also seems to indicate that the larger owls have to consume more prey to survive, so they will be more likely to consume a squirrel, whether it be living or dead. We thank you for reading, and we hope that we have answered all your questions and left you with a complete picture.