Chipmunks, like other animals, can be carriers of pests and diseases. Some of these are common, such as lice and mites. Others may be more dangerous. But before we get to that, let’s take a look at the matter at hand: Do chipmunks carry rabies? Are there any other diseases carried by chipmunks?

Chipmunks are not major carriers of the rabies virus. However, there are several other diseases carried by chipmunks.

Keep reading because this is going to get interesting. 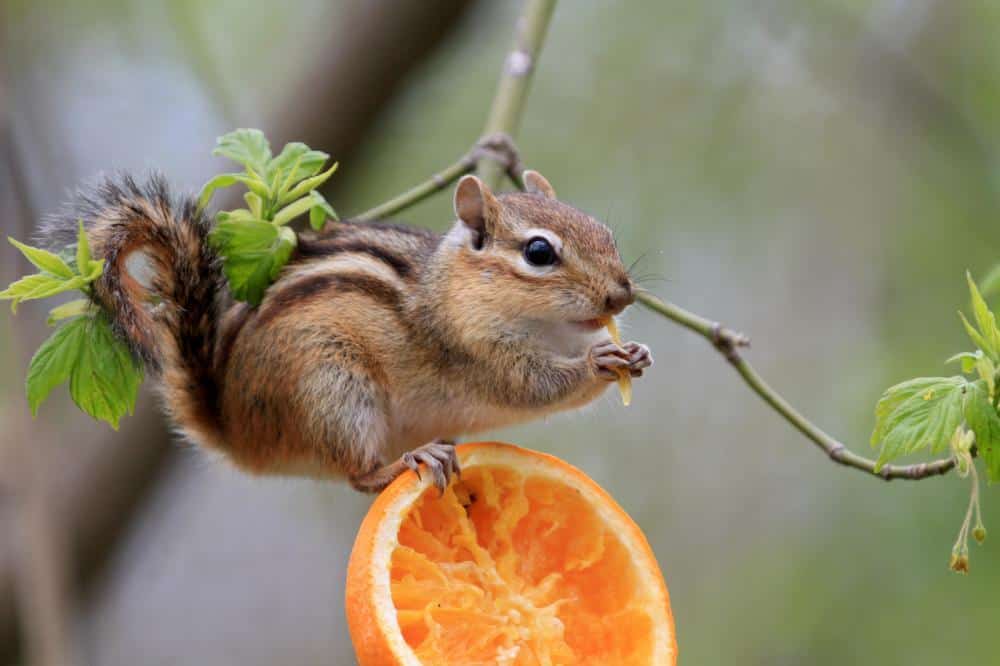 According to the Center for Disease Control, chipmunks rarely suffer from rabies. Of course, this doesn’t mean they are immune to this frightening disease (source).

Child Gets Infected With Rabies From Chipmunk Bite

While there is limited scientific data on the occurrence of rabies in chipmunks there is at least one well documented instance of an infected Eastern chipmunks (source). It involved a case where a 5-year-old boy was bitten by a chipmunk in South Carolina. The study noted that the chipmunk had initially been caught by the family dog (this is a rare occurrence in itself since it is difficult for a dog to catch a healthy rodent). When the child picked up the chipmunk, he was bitten on the finger.

The chipmunk was then killed and the specimen was submitted to the Bureau of Laboratories in South Carolina. This laboratory runs tests for rabies on the brains of feral rodents that have bitten human beings. In the case of this particular rodent, the tests revealed that it had been infected by the rabies virus.

This was the first time a chipmunk had been identified as a victim of the rabies virus. It was suggested that the virus may have been transmitted to the chipmunk through a rabid raccoon. The frequency of rabid raccoons in South Carolina is quite high.

The study concluded that this was a one-off case. On the whole, there have been very few reports of rabid chipmunks (and other rodents) at the Center of Diseases and Control (CDC). Rodents such as chipmunks do not pose a major threat in harboring the rabies virus in the United States. However, it was also pointed out that many laboratories avoid running tests on rodents for the rabies virus.

As a result, it is difficult to estimate the actual frequency of rodents infected by rabies. Nevertheless, logic states that if chipmunks were susceptible to the rabies virus and acted as a major reservoir for it, then more research would have naturally followed.

Other Diseases Carried by Chipmunks

Chipmunks may not get infected by rabies very often, but there are still plenty of other things to watch out for. These diseases are one of the major factors in chipmunk lifespan determination.  Let’s take a look at some of the common diseases carried by chipmunks and what they can do:

Chipmunks Can Carry The Plague

Chipmunks and some ground squirrels are also known to carry the plague. The disease is prevalent in California and you need to be cautious around rodents such as chipmunks that may be carrying it (source).

Plague can spread through direct contact with an infected chipmunk. Consequently, health officials in California have warned against feeding chipmunks and squirrels in these areas. You must avoid touching an injured, sick, or dead chipmunk as well. If you own a cat, then you must keep it away from these rodents. This is because cats pose a high risk of transmitting plague to humans.

Chipmunks have also been identified as carriers of Lyme disease (source). According to a study carried out at the University of Pennsylvania, chipmunks and shrews can carry Lyme disease. The study was conducted to challenge the common notion that mice are the biggest animal reservoir for this disease.

Lyme disease is a bacterial disease that infects black-legged ticks. It can be transmitted to humans if they get bitten by an infected tick.

White-footed mice have long been associated as the primary carriers of the bacteria responsible for Lyme disease. They also act as a host of black-legged ticks. Consequently, they play a big role in the spread of Lyme disease. The disease gets spread when an immature tick ends up biting an infected mouse and then bites a human.

Now, as per the new study conducted in Pennsylvania, chipmunks are also responsible for 13 percent of the infected ticks. They act as carriers of the disease like the white-footed mice do. The research also pointed out that most vaccination strategies for Lyme disease are based on targeting mice. Given that other rodents such as short-tailed shrews, masked shrews, and chipmunks are also responsible for this disease, these strategies need to be revised.

Lyme disease can only be transmitted to humans through a tick’s bite, but you should still exercise caution when making direct contact with a chipmunk or other rodents.

The Colorado Tick Fever is a disease that is caused by a virus. Chipmunks, ground squirrels, and other small mammals are common carriers of this virus (source). Like Lyme disease, the disease gets transferred to a tick when they bite a chipmunk. It is then transmitted to humans when they get bitten by the infected tick.

A bite from a chipmunk can cause you to develop some serious symptoms. If left untreated, it can cause an infection resulting in the permanent loss of skin and tissue.  These infections are attributed to the chemicals present in a chipmunk’s saliva. You must consult a doctor immediately after a chipmunk bite and make note of any signs of infection such as oozing, redness, and swelling.

Chipmunks also act as hosts to mites and lice. These can easily be transferred to humans when they come in direct contact with them.

Chipmunks Can Carry Many Diseases

Chipmunks are not major carriers of the rabies virus. However, there are several other diseases carried by chipmunks. Most prominently, chipmunks can act as hosts for tick-borne diseases such as Lyme disease and Colorado Tick Fever. They are also known to carry the plague. You must exercise extreme caution when interacting with a chipmunk since it may be harboring a disease.

The presence of these diseases is something to be aware of if you try to rescue an orphaned baby chipmunk or try to turn a wild chipmunk into a pet.

The best prevention is to leave these animals alone.

Other Animals That Can Carry Rabies

Chipmunks and rats aren’t the only animals that can carry rabies. Foxes, skunks, and raccoons are notorious for carrying the disease.

In case you’re worried about your hamster, gerbil, or guinea pig, it’s extremely rare (if not completely unknown) for one of these animals to carry rabies. It can happen but it’s highly unlikely.