Flying squirrels are beautiful animals that many people have heard about but few people have actually seen.  Because sightings of these animals are not common it leads many people to ask, “Are Flying Squirrels Endangered?”

It turns out that the population of flying squirrels is quite robust and as a species are not endangered.  The lone exception is a single sub-species of flying squirrel (Glaucomys sabrinus coloratus) that has been on the Endangered Species list since 1985. 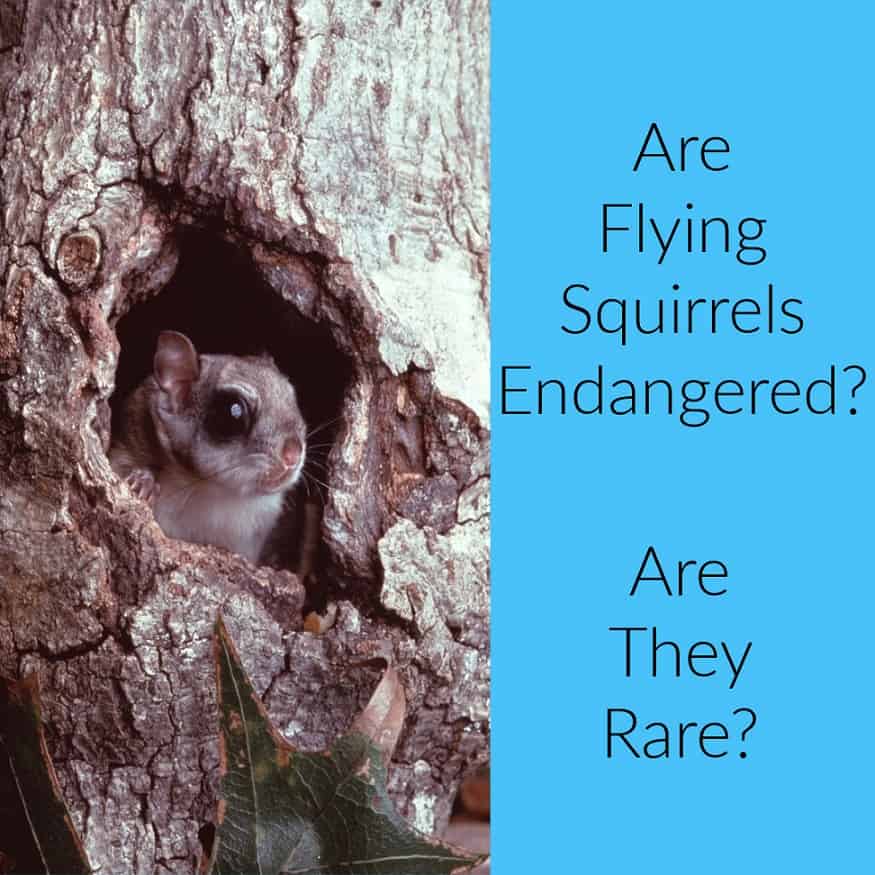 What are Flying Squirrels?

The name “flying squirrel” is somewhat of a misnomer as the squirrels don’t actually fly, but glide through the air on membranes of skin attached to their legs. The squirrel’s membranes work similar to a hang glider and are what inspired base jumping suits.

While the two subspecies of flying squirrels native to North America have many similarities, including being able to glide through the air with the greatest of ease, their most discernible difference is their belly fur.

While the range of both species is fairly large, and even overlap in some areas, most people have never seen either species in the wild due to them being nocturnal.

While they are not capable of powered flight like a bird or bat, flying squirrels can glide up to 150 feet when launching from trees or other elevated structures like cliffs. The squirrel launches itself into the air with its legs, spreads it legs wide to open its membranes and glides effortlessly to another tree or down to the ground.

The squirrels uses slight movements of their legs to direct their flight path and use their tail as a brake to slow its descent.

Where Are Flying Squirrels Found?

Between the two species, flying squirrels have a range that encompasses virtually all of north America from Alaska to Florida and down into Mexico. One subspecies or the other, and sometimes both, are found in the majority of states.

Northern flying squirrels are very social and often form groups of up to eight individuals. They do not hibernate and spend the winter months in same-sex groups to keep warm.

Northern flying squirrels are strictly nocturnal and have two periods of activity that span a two-hour period starting just after sunset and a second two-hour period that ends just before sunrise.

Their preferred habitat is conifer trees, but also inhabit deciduous and mixed forests. Each individual may have several dens throughout the year with the winter dens typically being in the cavities in conifer trees.

Northern flying squirrels communicate via vocalizations, as well as touch and scent, with the most common calls being soft, low chirping sounds with the animals giving off a warning “cluck” if they sense danger.

Northern flying squirrels are omnivorous and eat a wide array of plants and insects.

Southern flying squirrels are found in the eastern third of North America in groves of dense deciduous forests with oak and hickory being the preferred species.

Flying squirrels are not rare.

According to the International Union for Conservation of Nature, both the northern and southern flying squirrels are common and widespread throughout their range, however no overall population estimates are available.

Many people believe the squirrels to be rare simply because they have never seen them.  The sparse sighting of flying squirrels is expected however as they spend most of their lives in the forest and only come out at night.

You should never expect to see a flying squirrel trying to get into your bird feeder in the middle of the day.

Which Flying Squirrels are Considered Endangered?

In 1985 two sub-species of the northern flying squirrel were placed on the Federal Endangered Species List.

The Bush administration removed the endangered status from this squirrel in 2008 but, after a lawsuit from environmental groups, the squirrel was returned to a protected status in 2011.

In 2012 the results of the lawsuit were appealed and overturned and the Virginia flying squirrel was once again removed from the endangered species list in 2013.

The major risk to flying squirrel populations is the introduction of non-native species that compete with flying squirrels for resources. Another important, but less severe, threat is the deforestation of the woods they prefer to inhabit and the large trees where they nest.

Here are a few more resources to learn more about flying squirrels.