Bats have been around for at least 50 million years, and there are many reasons for why they’ve managed to thrive for so long and in so many different environments. From their highly evolved bodies seemingly built for flight to their hyper-accurate sense of echolocation, bats have become one of the hardiest and longest-lasting species of animal to ever exist.

Alas, bats do die. However, they live lives that are comparably long, even when we consider how long some birds live (some Cockatoos can live to be 80+ years old). In this article, we’ll be answering the question, “How long do bats live?”, and we’ll be exploring the many factors that contribute to bat death, either prematurely or naturally. 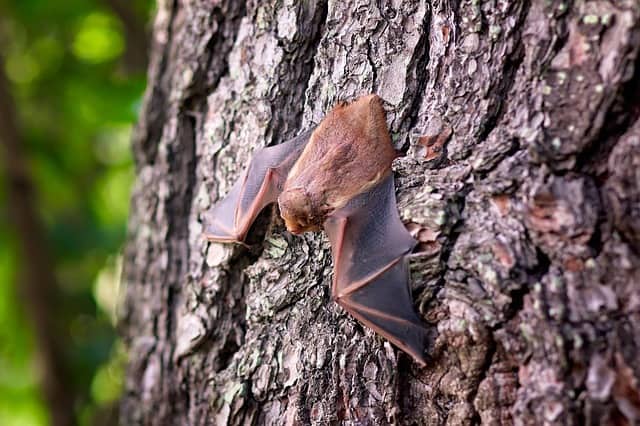 Let’s go ahead and answer our main question: “How long do bats live?”. The answer is fairly complicated, because there are over 1,300 species of bats, and each species has its own lifespan average. It is safe to say, however, that most bats live from 10 to 25 years, which is still a long time! (source)

It is said that if a bat reaches 30 years old, that’s about the equivalent of a human being reaching 100 years old. So, instead of using ‘Dog Years’ to describe the age of a dog in human years, we can assume that one ‘Bat Year’ is roughly equal to three human years. All things considered, an average bat lifespan can be said to be 20 years. The life expectancy of any bat depends largely on the species and other factors, which we will be discussing below.

Some Bats Have Very Long Lifespans

So, now that we know how long bats live on average, which bat species lives the longest? As it turns out, the male Brandt’s myotis have been shown to live as long as 41 years in the wild. That’s a long time, even for bats! This bat fact is important for a couple reasons:

Those who study bats are always interested in learning more about them. Now that they know at least one species of bat can live upwards of 40 years in the wild, this information ‘resets’ what biologists thought they knew about this amazing animal.

Studying older bats is helpful in the field of Gerontology, which is the study of aging. Believe it or not, learning how bats age (and age well) informs other scientists interested in prolonging the lives of humans. Because bats are mammals just like humans are, there are many things we can learn from them that can help our understanding of our own species.

One important feature of the bat’s life is that it doesn’t breed as quickly as other animals its size. This means that female bats spend much less time than, say, rodents, mating, having babies, and raising them. In fact, a female bat is only going to give birth to a single bat baby (also called ‘pups’) once a year. And, that only happens if mating takes place and if it’s successful.

Factors that Contribute to Bat Mortality

Bats die naturally for many reasons. Among them include old age, disease, and predation (being hunted and consumed by other animals). Some of the most common bat predators are:

That’s right. The truth is that human beings are predators of bats, but not because we want to eat them. Rather, humans kill bats both directly and indirectly by driving them out of their habitats—places like abandoned buildings, caves, and mines.

There has been a long-standing belief that bats are carriers of numerous diseases, the chief among them being rabies. While this can be true, the reality is that bats are not prolific spreaders of rabies by any measure. Instead, bats rarely if ever transmit rabies to other animals, and it’s been shown that bat colonies existing in urban areas do not contribute to the spread of rabies in the area.

What other reasons do humans have for eliminating bats? Many times, humans want to feel free to explore natural places like caverns, rock crevices and subterranean canals without having to worry about being bitten by a bat, or having to deal with bat guano (poo). It’s for this reason that so many millions of bats have been either killed or displaced—we humans can be high maintenance!

Curious? Read this Where Do Bats Live During the Day? What About Winter?

You can’t get very far researching bat diseases without coming across something known as White Nose Syndrome. This disease starts as a fungus that accumulates on the noses of bats, often while they are in hibernation. The disease is called ‘White Nose Syndrome’ because the fungus itself is white in color, and when it covers the nose and face of the bat, it makes the bat look ‘white-nosed’.

This fungus, called Psuedogymnoascus Destructans, isn’t always deadly. Many bats can contract the fungus and live on through hibernation just fine. However, for many bats that are afflicted with White Nose Syndrome, their hibernation is interrupted. And, when bats are ‘woken up’ prematurely during hibernation, they often starve due to a lack of food.

Other diseases that affect bats include any viruses that can be spread among flying animals or even to other mammals. These diseases include over 65 different pathogens, ranging from Ebola, SARS, and Nipah viruses. While these diseases may not directly contribute to an early death for the bat, the bat can still be a carrier of it and can infect others multiple times throughout the course of its life.

Even though bats have an average lifespan that is specific to their species, there are some environmental factors that will play an important role in determining bat life length. Bat longevity is largely based on three factors:

For some humans, bat infestations can be a problem. For this reason, it makes sense to humanely remove them. In doing so, the bats can be effectively ‘rehomed’ in some cases, by either removing their food source (hard to do with massive clouds of insects), disrupting their hibernation (something that can also pose a risk of starvation), or simply making their roosts unlivable.

Any time an abandoned building or mine is being demolished or decommissioned, it’s a good idea to screen the structure for bats first. After all, humans are already responsible for multiple millions of bat deaths every year!

Bats Live Long and Are Fascinating

Bats truly are fascinating and complicated animals. They’ve been around a long time, and they have a lot to teach us about our own connection with the Earth. Their role in our ecosystem cannot be overstated. For example, did you know that bats are crucial to the agricultural cultivation of bananas and mangoes?

In reading this article, you’ve learned that bats live to be an average of about 20 years old, that the oldest bats can live beyond 40, and that numerous factors contribute to the longevity of any single bat species. Findings about bat longevity help to inform other specialists in fields related to prolonging the lives of mammals like us humans. In this way, bats continue to give us an ongoing lesson in how to extend our own lives. They are mammals, too, after all!

You’ve also learned that bats and humans have had a rough relationship, with humans becoming the number one predator for bats, even among other natural predators like owls, snakes, and raccoons. While humans do have good reasons for needing to rehome or displace bats, we’re not always humane about doing so. A large stigma related to rabies among bats has a lot to do with this.

Lastly, you’ve learned that Bats can live longer when they have ready access to the things they need in order to thrive—things like plentiful food and an undisturbed location to hibernate. Disrupt either of these, and the lifespan of the affected bat(s) will almost assuredly drop.

To learn more about bats and our relationship with them, feel free to explore the other resources listed on this page.

Like this: Fear of Bats (Chiroptophobia): Why Are People Scared?