Ever since we started our Squirrel Feeder Empire over at The Squirrel Shop I have been a bit obsessed with what squirrels eat.  It might be hard to imagine but those cute squirrels in your backyard like to eat more than just the sunflower seeds in your bird feeders!

A squirrel loves a good peanut and of course they go after all of the pine cone seeds and acorns that they can lay their little paws on. But what else?  Do squirrels eat anything more exotic or do they just stick with nuts and seeds?  I was curious to learn if squirrels eat meat or are they vegetarians.  Here is what I found (and some of it is freaky)! 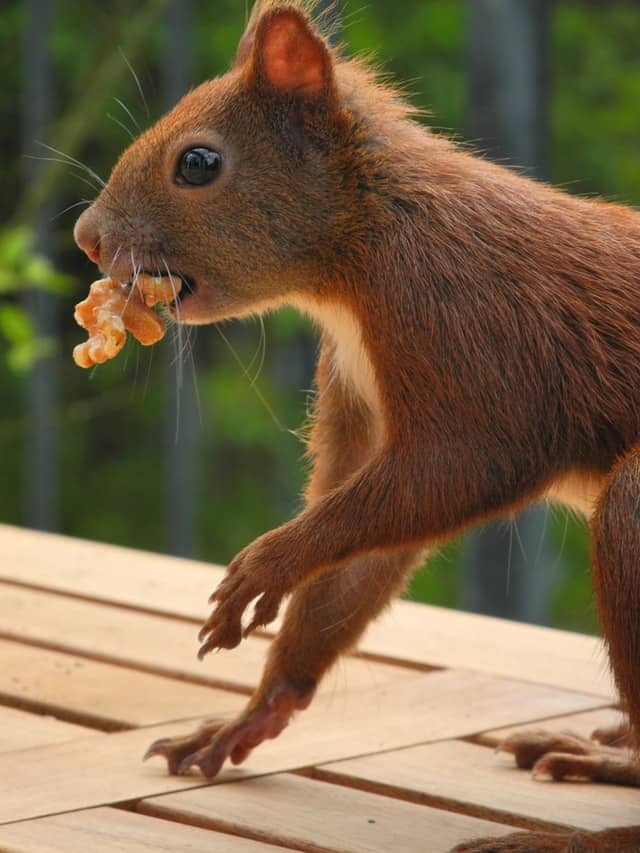 Squirrels are omnivores that do eat meat.  A squirrel’s diet is primarily vegetarian but it will eat meat opportunistically if they find an unguarded nest of baby birds or fresh carrion.  Some squirrels have been seen to actively hunt lizards, mice etc.  Squirrels will often eat snake meat after they have defensively killed an attacking snake.  Some species of male squirrels have been documented killing and eating the baby squirrels produced by other males.

Squirrels eat meat, plants and vegetables. Basically, squirrels are omnivores who will eat almost anything. Their diet is varied and includes all kinds of fruits, vegetables, flowers, and fungi that are native to their habitat.

It’s hard to imagine these animals as predators, but nature always has a way of surprising you. Squirrels are known predators that will target a variety of small animals. The eastern grey squirrel, for instance, will eat birds as well as its own kind. The western grey squirrel, on the other hand, will eat mountain quails, while the eastern fox squirrel prefers doves and blue jays. The Douglas squirrel attacks ground squirrels and some squirrels (whitetail antelope squirrel and nelson antelope squirrels) eat lizards, kangaroo rats, and pocket mice. Squirrels will also go after chipmunks, snakes, ducks, sparrows, and rabbits. Rock squirrels have been recorded to attack wild turkeys as well.

On the extreme end of squirrels as predators is a story that was reported out of Russia by the BBC a few years ago.  Please keep in mind that this story is unconfirmed and local Russian experts have called it nonsense.  That being said…..the story reported that a large dog went to a park and started barking at the the squirrels.  The squirrels responded by working as a pack, ripping the dog to shreds and running away with chunks of dog flesh to eat.

It’s a very extensive list and different kinds of squirrels will attack different animals, but it certainly establishes the squirrel to be a predator.

Why Do Squirrels Eat Meat?

Unlike most omnivorous and carnivorous animals, squirrels are not routine predators. They will only resort to attacking other animals and eating meat if the circumstances demand it. Some of the factors that cause predation in squirrels include defense, season, climate, reproductive condition, gender, and the availability of plant sources.

There are several viewpoints as to why squirrels eat meat. The first reason is that female squirrels may require a better source of protein and minerals when they are reproducing. This was shown through a study that examined the eating habits of lactating and pregnant tree squirrels. According to the study, these squirrels would consume meat regularly. Studies also show that seeds do not provide sufficient calcium, sodium, phosphorus, or nitrogen for female tree squirrels. It can thus be assumed that squirrels eat meat in order to reproduce successfully.

A second viewpoint states that squirrels consume meat due to the seasonal decline in available plant food. For instance, the water content and nutrient density decline in plants during spring and summer. This may force squirrels to seek other food sources in the form of small animals and carrion.

Another reason that a squirrel will eat meat it because they worked so hard to get it!  There is an amazing and complicated relationship between ground squirrels and snakes.  Snakes love to eat baby ground squirrels but mother ground squirrels put up a heck of a fight to keep snakes away.  It turns out that, in defense of her burrow, mother squirrels often kill invading snakes and will eat the carcass afterwards.

Here is an awesome video of a pack of ground squirrels going after a cobra.  Nobody gets killed and eaten in the video (you can find plenty of videos of squirrels eating snakes on YouTube if you want).  I just wanted you to see how these cute squirrels can turn into snake fighting ninjas!

According to a study, baby red squirrels are often killed by older male squirrels. These squirrels will also often eat their victims. When the victims were subjected to DNA analysis, it was discovered that they were not the offspring of the male squirrels that attacked them.

One may assume that this infanticide is the result of food shortage, but this is not the case. In reality, this behavior is more common during years when there is an abundant amount of food available. Normally, female squirrels will only have one litter of squirrels. However, with more food around, female squirrels are more likely to give birth to another litter.

In the first round of breeding, these female squirrels will mate with multiple male squirrels. As a result, there is no way for a male to distinguish the pups fathered by him. Consequently, the male will kill these baby squirrels so that the female squirrel stops lactating and is ready to mate again. This allows the male squirrel to make sure that he sires the next line of pups.

Here’s a video of cannibalistic squirrel. Warning: It might be a tad bit disturbing to watch:

Is There Something That Squirrels Do Not Eat?

So far we have established that squirrels eat meat, plants and just about anything in between.  But, is there anything that they do not eat? The answer is yes!

Squirrels will eat most plants and fruits, but they stay away from vegetables like raw onions and raw garlic. They also avoid eating hot peppers such as Anaheim peppers, Serrano peppers, and jalapeños. This is because peppers contain the compound capsaicin. This compound is also responsible for the hot sensation associated with peppers. When it is consumed, capsaicin will bind to pain receptors and trigger the same neurological pathway that is associated with other pain-causing stimuli. Capsaicin also disrupts the thermoregulatory system in mammals. The ability of capsaicin to cause pain can be used to change animal behavior as well.

This is the main reason why squirrel repellent sprays include pepper and why you are advised to spread red pepper flakes over an area that is susceptible to a squirrel attack. Researchers have also proposed the use of capsaicin in bird feed.  Including capsaicin in bird feed, combined with the use of a squirrel proof bird feeder, is one way to let your song birds eat in peace. Birds lack the pain receptors required for capsaicin to work and can consume it without harming themselves.

Squirrels eat meat and are not strict vegetarians. However, they only go after small animals like rabbits and mice. Squirrels have been known to attack snakes as well, but this is mostly out of self-defense. They are opportunistic creatures that are likely to go after prey that has gotten hurt and is thus easy to overpower. They will also kill animals that have been poisoned. Whatever the reason for the attack, one thing is certain— there is still a lot that we don’t know about these animals and they are far from ordinary.