Red foxes have what many people would consider peculiar behaviors and this is especially true of their sleeping habits. Red foxes love to dig and build cozy dens, but with a few exceptions red foxes typically do not sleep in their burrows.

So, where do red foxes sleep?

Foxes sleep near their dens, preferring to sleep out in the open, near brush or under a ledge or uprooted tree curled up in a ball with their backs to the wind and their noses tucked under their tails. Foxes will sleep in their dens when it is extremely hot, raining or when a mother is raising her kits. 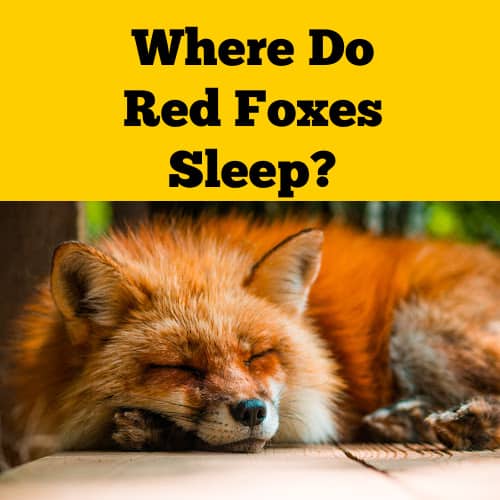 Red foxes in urban areas may sleep anywhere they will have some privacy away from loud noises and people. Here favored sleeping spots may include under a raised foundation, in a shed or even a garden. While they cannot climb trees like the gray fox, red foxes will sleep in a tree if they can get up in a low hanging branch.

Where do Foxes Make Their Dens?

Red foxes make their dens in areas of dense vegetation so the burrow is hidden from casual view to provide privacy for raising their young.

Red foxes will typically create a burrow by digging under a large tree or group of large rocks. Foxes are known to take over burrows made by other animals, such as rabbits and badgers, and expand the den to suit their needs.

Foxes will also inherit dens from previous generations that have moved to a new den or area. It is common for a pair of red foxes to have multiple dens that they use to rear young and cache food.

How Can You Tell a Fox Den?

Because they seek out secluded locations, fox dens are often hard to spot and red foxes are masters at sneaking around undetected. Dens are almost always located in wooded areas and can be discerned by the size of the hole, tracks in the dirt and the unmistakable smell of fox scent.

While foxes will have a separate latrine area away from their den, foxes mark their territories with urine and the area around the den will have a highly detectable and unmistakable musky smell. Bones and feathers from kills will often be found in the area near a fox den.

The average fox den consists of four to five components with the most noticeable feature being a main entrance hole approximately seven to eight inches in diameter that is dug at an angle.

Fox dens vary in size and can be up to 75 feet in length with the average burrow being three- to eight-feet deep and having multiple entrances. Smaller dens are about three feet deep and will have one or two entrances whereas larger dens will have three to eight entrances.

While not visible from the surface, foxes will create a tunnel or tunnels that lead to numerous underground chambers that each serve specific functions such as for food storage and a nursery.

Red foxes have varied sleeping habits and these can depend as much on the habitat and time of year as the individual fox.

Foxes prefers to sleep above ground open, but will seek out cover in the event of danger or inclement weather. Most foxes sleep within close proximity of their dens near brush or in low areas so as not to be seen by predators and to have a ready escape.

Most foxes will have multiple dens in their home area, or “range,” with one often being a special natal den to raise their young. The mother stays in the den and sleeps with the kits while the male keeps watch for danger and hunts to provide for the family.

Because they hate to be wet, foxes will often dig a temporary burrow or sleep in a rabbit hole to get out of the rain. Foxes are also known to take short rest breaks in random burrows called “fox rests” while they are out hunting. Foxes will wake up if they sense another animal lurking around their den.

How Much Do Foxes Sleep?

Red foxes will sleep more than eight hours a day in the wild with the average being roughly 10 hours in a 24-hour period. Red foxes may spend as much as 12 to 14 hours a day sleeping during the winter months.

Do Foxes Sleep in the Day or Night?

Typically, red foxes go to sleep shortly after sunrise and will snooze until about sundown. However, while they are most active at night for hunting purposes, foxes are not strictly nocturnal. Red foxes commonly exhibit cathemeral behavior, being active both day and night, and it is not uncommon to see foxes out hunting during the daytime in urban areas.