However, there are ways to tell the two species apart. 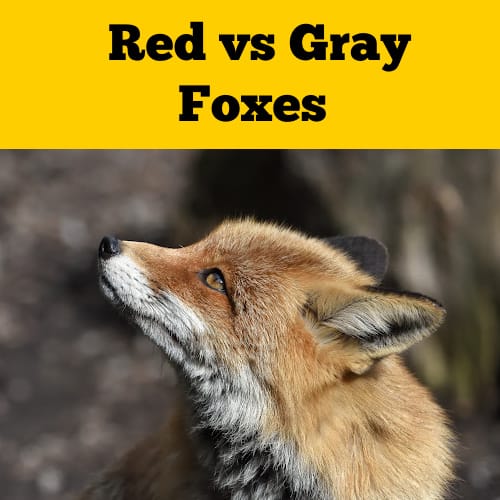 Distinctive Characteristics of the Red Fox

While it is most commonly colored red, the red fox can be red, black, white or gray. The most noticeable and positive identifying traits of red foxes include:

Of the two species, the red fox is larger than the gray and the largest of all the fox species. The red can weigh between 15 and 31 pounds with a body that is 14- to 20-inches tall at the shoulder. It ranges from eight to 35 inches in length with a tail from 12- to 22-inches long. The ears measure three to five inches high.

Distinctive Characteristics of the Gray Fox

The gray fox is significantly smaller than the red, at about the size of a house cat, weighing between six and 13 pounds. Its stands 14- to 16-inches tall at the shoulder and ranges from 23 to 26 inches in length with a 12- to 15-inch long tail. The ears measure two to three inches in height.

Another positive indicator is gray foxes are the only member of the canidae family that have retractable claws. This allows it to climb trees and is sometimes referred to as the “tree” fox. The gray will climb as high as 60 feet to rest, forage or escape predators. This means if you ever see a fox in a tree, you can be sure it is a gray.

With the exception of gray foxes having the ability to climb trees, the behavior of the two species is very similar.

Both species hunt smaller mammals and eat carrion as well as fruits and other plant matter and insects. Referencing tracking studies, biologists estimate that both species travel an average of five miles from their dens in search of food.

While both species are highly adaptable and are found throughout wooded areas, the two species often favor somewhat different types of habitat.

While both species have become comfortable around people, gray foxes tend to stay further from population centers.

Gray foxes are found from northern South America to southern Canada. Red foxes have the largest range of any members of the Carnivora order and are found across most of North America as well as Europe, Asia and parts of North Africa.

Here are a few of the most frequently asked questions when comparing gray fox vs red fox.

There is the debate in the scientific community as to whether gray foxes are consider “true” foxes and this tends to be as moot as whether or not Pluto should be classified as a “planet.” To help understand the argument, the seven classification of the taxonomy rankings are as follows:

Both the gray and red foxes belong to the same taxonomic Family of canidae.

Using only this classification, from a strictly taxonomic perspective, some scientists believe the gray is not a true fox. However, other scientists think all foxes should be listed under the same classification.

The red and gray fox are related in as far as they are both of the same taxonomical family of Canidaes, along with 32 other species. This means both species evolved from common ancestry, however most fox species are not compatible enough at the chromosome level to interbreed.

For example, red foxes have 34 chromosomes and gray foxes have 66. This is not uncommon across many fox species as the arctic fox has 50 chromosomes.

Where the ranges of the two species overlap, gray foxes are usually more aggressive than reds and the smaller gray usually becomes the dominant species.

When it comes to people, red foxes are typically less bothered by people, whereas grays are shyer and inhabit areas that are less populated. Neither reds, grays nor any species of fox is aggressive towards humans, unless it has contracted rabies.

The gray fox is classified as a species of least concern and is not listed as endangered by the U.S Fish and Wildlife Service as of 2022. However, as the gray fox prefers more remote areas, encroachment by humans is a threat.

Overall, gray foxes are no more rare than the red fox, but grays are rarely seen due to their mostly nocturnal lifestyle.

The Twelve Species Of True Foxes