There are twelve types or species of “true” foxes in the genus Vulpes. In fact, foxes live all over the world except for Antarctica.

However, the Red Fox in Australia was introduced for sport hunting.

Foxes are considered wild animals and have not been domesticated even though sometimes people try to keep them as pets. 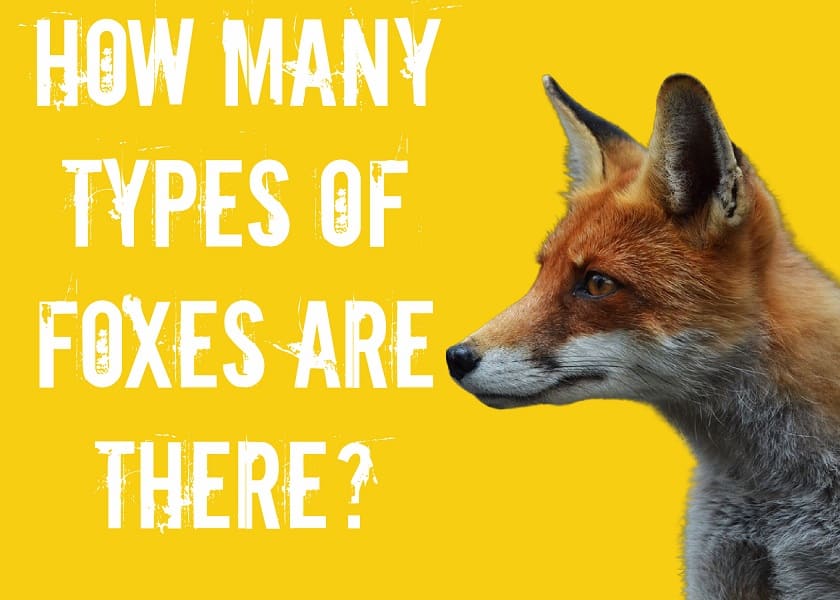 What Makes a Fox A Fox?

They are omnivores and eat a variety of foods. They have a pointed muzzle and a flattened skull. Many fox species have a different color of fur on the end of their tail which can help identify them.

Differences in fox species come from adaptations to where they live. For example, the Kit Fox lives in the desert regions. They have large ears and short coats to expel heat.

There are 25 other species of animals that are called foxes but they belong to different genera.  These animals are closely related to Vulpes and can be visually confused with True Foxes.

One example of a “false fox” is the gray fox (Urocyon cinereoargenteus) which is widespread throughout North and Central America. Other species include the crab-eating fox, bat-eared fox, and pampas fox.

The 12 Species of True Foxes from the Vulpes Genus

Location: Arctic regions of Canada, Alaska in the US, northern Europe, and Russia

Adaptations: Thick white fur and a fluffy white tail that it can use to protect its face while sleeping.

Diet: Arctic Foxes eat rodents such as lemmings and voles, baby seals, fish, and waterfowl. They also eat seaweed and berries. The arctic fox population rises and falls based on the lemming population.

Fun Facts: Arctic Foxes do not hibernate but stay active throughout the bitterly cold winters. They build their dens so the entrance faces southwest to let the sun enter. In fall they gather and hoard food such as bird eggs to help survive food shortages.

Adaptations: The Bengal Fox is a small brown fox that blends in easily in its semi-arid habitat. They have easily adapted to humans and are often spotted in urban areas.

Diet: Typical of many foxes, Bengal Foxes eat rodents such as Indian gerbils and field mice. They also consume termites, spiders, and eggs. They are preyed upon by feral domestic dogs and Asian wolves.

Fun Facts: Bengal foxes are very vocal. They howl at night and have a “chattering cry” used for warnings. Some groups of humans hunt them for food and medicinal reasons.

Location: Southwest Asia, Israel, Arab Peninsula, and down into Egypt.

Adaptation: The coats of Blanford’s Foxes change colors from winter to summer to be better camouflaged. Large ears help displace the heat.

Diet: Does not hunt as much as other fox species and typically forages. It eats mainly fruits, seeds, and insects.

Fun Facts: The Blanford’s Fox has cat-like claws that are sharp and semi-retractable. An excellent jumper they have been recorded jumping 9.8 feet and can also climb cliffs (source). Instead of burrowing, they find dens among rock piles.

Adaptations: The Cape Fox lives in hot arid regions where it is active at dawn and dusk. During the day it burrows underground to escape the heat.

Diet: Cape Foxes are opportunistic omnivores and eat a wide variety of foods including rodents, rabbits, birds, and berries.

Fun Facts: Cape Foxes are the only true fox in the Vulpes genus to live in Southern Africa. They have several predators and are hunted by lions and leopards. Cape foxes often get caught in traps that farmers set for larger animals.

Adaptations: Corsac Foxes have adapted to steppes biomes with grassy plains and can go without food or water for several days.

Diet: Corsac foxes eat a variety of rodents and insects. They have small teeth and depend on their ability to jump and pounce on their prey.

Fun Facts: Corsac foxes are extremely reclusive and avoid human encounters. Sometimes corsacs will band together and hunt in a pack much like wolves. They also will have adjoining dens with interlacing tunnels. Their population is declining due to fur trapping and hunting by humans.

Location: Desert regions in the Middle East, Sahara desert, and the Sinai Peninsula of northern Africa. They are protected in several countries.

Adaptations: The fennec fox’s kidneys have adapted to deal with high temperatures and little water. They are crepuscular meaning they hunt at twilight.

Diet: Small mammals, birds, lizards, and insects. They get most of their water from their prey.

Fun facts: The Fennec Fox has the largest ear to body ratio of all the foxes and smallest size. Groups of fennec foxes build large social multi-roomed dens. Very fast and evasive. The fennec fox is the national animal of Algeria. The fennec foxes’ paws have been studied for tire traction because they are able to grip the sand and move quickly (source).

Location: Southwestern US and Northern Mexico

Adaptations: Kit Foxes live in arid areas and escape the heat by being nocturnal.

Diet: Kit Foxes are omnivores and also scavengers. They eat rodents and hares as well as a variety of small birds, eggs, and insects. They will also eat some garden plants and will steal tomatoes from gardens. Kit foxes cache their food.

Fun Facts: The Kit Fox is a very small fox and weighs only 3 – 6 pounds. A sub-species, the San Joaquin kit fox is on the Endangered species list. Continued population decline is from the loss of habitat in California.

Diet: The Pale Fox is an omnivore and eats small mammals, lizards, and birds as well as berries and wild melons.

Fun Facts: They build large dens with tunnels as long as 49 feet (source).  They have not been well studied by scientists.

Adaptations: The fur of Ruppell’s Fox fully covers the pads of their feet to protect them from the hot sand. Crepuscular or nocturnal they burrow during the day. Resting dens are separate from dens used to raise pups.

Diet: Ruppell’s Fox are omnivores. Their diet varies widely with location but as typical foxes, they often prey on rodents, small birds, and lizards. They are also known to scavenge in human garbage.

Fun Facts: Named for German naturalist Edward Ruppell. It has expanded its territory with the increase of desertification.

Location: The Red Fox is the most widely spread fox living on every continent except Antarctica.

Adaptation: Long history of living close to humans and adapting to urban environments. There are as many as 45 subspecies that have adapted to specific ecosystems.

Diet: The Red Fox has an omnivore diet of small rodents, reptiles, and fruits depending on the environment. They will enter creeks and fish for crawdads.

Fun Facts: There is quite the scientific controversy on whether they are an invasive or native species in the US as they came into the Americas during the Wisconsin Glacial period. It’s not always red in color. There are black and white color variations of the red fox. They are the largest of the Vulpes genus.

Location: Lives in the Great Plains regions of the USA and Canada

Adaptation: The Swift Fox excels at hunting because it is very fast and can reach speeds of up to 25 mph (source).

Fun Facts:  The Swift Fox is the smallest canine in North America and about the size of a domestic cat. At one point they were considered endangered and were widely hunted. They disappeared from parts of their range in Canada. Conservation and reintroducing programs have stabilized the population.

Adaptation: The Tibetan Sand Fox is a compact fox with small body and ears so it can inhabit upland plains in higher elevations.

Diet: Tibetan Sand Foxes eat pikas, marmots, and other rodents. Will feed on carrion of hooved animals and sometimes livestock.

Fun Facts: They often use brown bears to help them catch pikas. The brown bear digs out the den and the sneaky Tibetian Sand fox grabs a pika and then runs off.

Also don’t miss:
[The Truth About Foxes] Do Foxes Hibernate?
Do Red Foxes Mate for Life?