I love feeding the squirrels and watching my dogs chase them in circles. Most of the time the critters are just scampering around like normal and chattering away at my dogs.

Sometimes though, you will see a squirrel that is acting incredibly aggressive towards humans or that is stumbling around when it walks.  Both of these behaviors are similar to what is seen in rabid wild animals. It made me ask the question, “Do squirrels carry rabies?”

Squirrels do not carry rabies but do carry other diseases.  If you see a squirrel behaving erratically then there are multiple reasons to explain the odd behavior other than rabies. 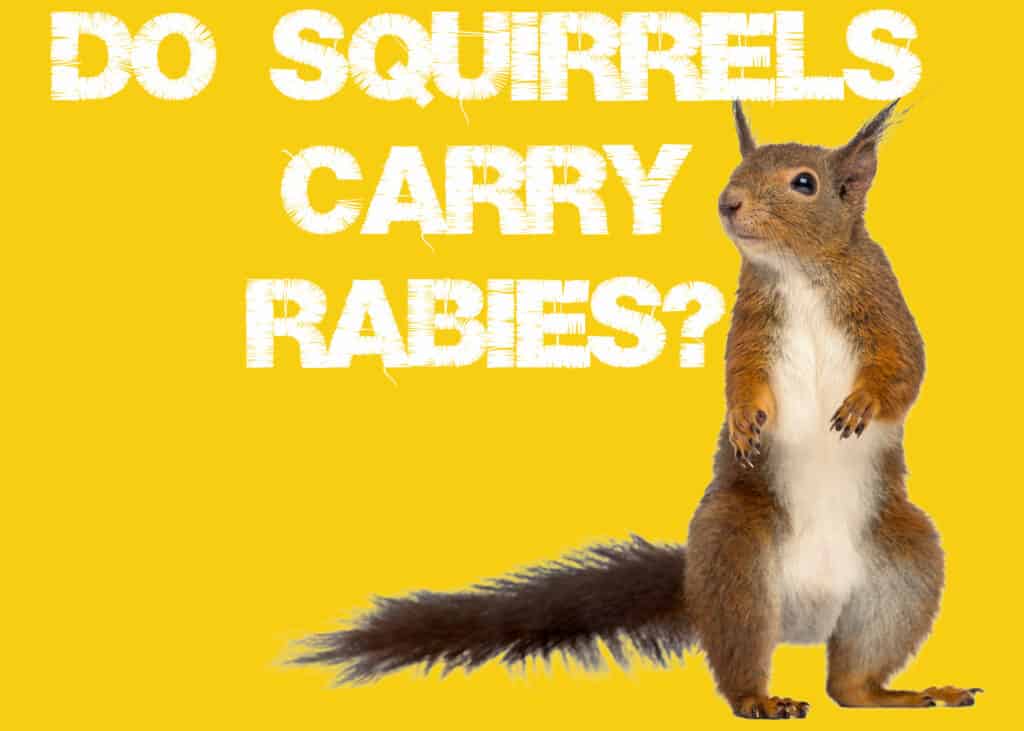 The Center for Disease Control (CDC) states that squirrels are extremely unlikely to carry the rabies virus.  While rabies is certainly a dangerous disease for humans it is actually quite rare in the US population.  On average there are only 2-3 reports of rabies being transmitted to humans in this country each year (source).

There is a rather short list of US rabies cases since 1951 (source).  In almost all cases of infection the disease was transmitted to a human through contact with bats.

Interested? Read this: Do Bats Carry Diseases? You Betcha!

Squirrels May Carry Other Diseases

Just because you don’t have to worry about rabies doesn’t mean that it is safe to handle squirrels as they can spread tularemia and leptospirosis through their bites.

Tularemia is a bacterial disease that attacks the skin and lymph nodes. The lymph nodes may swell while ulcers may develop at the site of the bite. The symptoms may develop within several days up to two weeks.

Leptospirosis is also a bacterial disease. Those infected with this disease may experience headaches, fever, vomiting, rashes, and jaundice. Leptospirosis may also lead to kidney damage.

In rare cases, squirrels may also spread ringworm. Ringworm is not a worm. It is a fungal infection that primarily affects the skin. A red rash with a ring-like appearance may develop and become irritated. This infection may spread through contact with a squirrel and is less likely to spread as a result of a bite.

While squirrels rarely pass diseases to humans and pets, it is still important to visit a doctor if you are unfortunate enough to getting bitten to take preventative action against infections.

Also, don’t miss this: Can My Dog Get Sick From Killing A Squirrel? Probably Not!

Why Is a Squirrel Acting Erratic?

One symptom people associate with rabid animals is the animal acting erratically.  Normally if you see a wild animal that has a staggering gait or is approaching you in an aggressive manner then you should be concerned about the animal being rabid.  However, there are many reasons to explain this behavior is squirrels other than rabies.

Squirrels are smart animals.  If one of their standard food sources comes from people sitting on park benches and feeding them peanuts then they are going to assume that anyone sitting on those benches has some food for them.

It is not uncommon for squirrels (or even chipmunks) that are used to being hand fed by humans to run towards people and even start climbing on them and going through their pockets.  These squirrels can become quite aggressive at times and have been known to accidentally scratch people with their sharp claws as they climb around them.

Squirrels have an extremely diverse diet that often includes fruits and vegetables.  If a squirrel eats fruit that has fermented then the little guy can get drunk and will be wobbling around as it walks.

Another reason for erratic behavior in a squirrel is if it is in distress from being poisoned or attacked by a predator.

There are a lot of people who dislike squirrels, especially ground squirrels, and resort to the use of poisons to eliminate them.  A poisoned squirrel is going to be suffering and walking/acting in a manner that is not normal.  Unfortunately there is nothing you can do to help a squirrel that has been poisoned.

Squirrels have many predators and are under frequent attack.

Read all about it here: What Eats Squirrels? Which Animals are the Top Predators?

If you see a squirrel that is walking or acting strangely then there is a good chance that it has escaped a predatory attack but was injured in the process.  If you see an injured squirrel you can put some food and water into a sheltered location for it but do not try to catch it with your bare hands.

It is important to remember that squirrel bites are uncommon but that the best prevention is to leave wild animals alone.