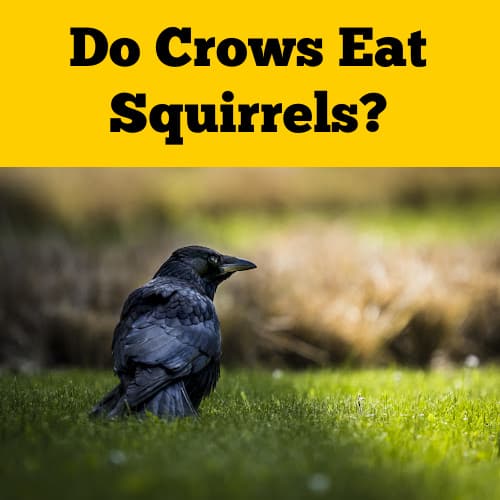 Crows Will Eat a Squirrel if Given the Chance

Being the every-opportunistic omnivore, crows will eat dead squirrels and will kill the young if given the chance. However, crows have an extremely tough time taking down a healthy adult squirrel. In fact, if the bird doesn’t watch its step, the crow can actually end up being on the squirrel’s diet!

There are three main ways crows make a meal out of a squirrel. Crows scavenge for food on the ground, in trees and other high places where squirrels may live such as cliffs and accessible areas of tall buildings. The birds tend to pick the most accessible food source and often the easiest source is a squirrel killed by a car, one killed by a hawk or a defenseless baby that has been left alone by it parents.

Ironically, squirrels are frequently hit by cars because of the way they try to escape predators, such as hawks and coyotes. When a squirrel senses danger it starts to run in a very erratic stop-and-go, zigzag pattern in an attempt to elude its pursuer. This causes it to first run into the road when a car approaches and then stop suddenly right in the path of the car.

Even if the driver sees the squirrel and tries to avoid it, the squirrel will often make an unexpected turn and run right in front of the car and become easy picking for crows.

Tree squirrels, like the gray, pine and fox squirrels, build there nest in the forks of branches out of leaves and other forest litter. Sometimes, when the parents go out to forage for food, a baby will venture outside the nest and become an easy meal for an opportunistic crow. Because they are so intelligent, crows will also watch from a distance and wait for the parents to leave the babies unattended and swoop in and raid the nest.

While it may be a surprise to many, the squirrel’s dietary requirements cannot be fulfilled by their stash of nuts alone.

Like the crow, squirrels are also omnivorous and opportunistic and readily consume a wide array of both flora and fauna. Squirrels eat a variety of nuts and seeds from sunflower seeds to hickory nuts.

The bushy tailed rodents love fruits and orchard operators often report losing a significant portion of their crops to squirrels. Squirrels will also eat insects including caterpillars, crickets, grasshoppers, spiders, ants and moths and pretty much anything that lives or grows on the ground or in trees.

As opportunistic omnivores, squirrels will also occasionally eat birds. Squirrels will take advantage of carrion and raid bird houses and eat the eggs and hatchlings. There have been reports of some of the more aggressive species, like the pine squirrel, killing birds trying to defend their nests. Squirrels are also ferocious fighters and, if attacked, they are capable of turning the tables on a predator of similar size.

Crows are fascinating birds belonging to the Corvid family that also includes jays, magpies and ravens. Crows are deeply embedded in cultures around the world. They are frequently referenced in literature and movies and can elicit both strong negative and positive emotions that range from rabid hatred to divine inspiration.

There are over 40 species of crows and their populations in the contiguous U.S. are larger now than when the Europeans first came to the shores.

The crow mates for life, has a very large brain relative to the size of its body and their intelligence rivals that of some species of primates. The birds learn quickly, can recognize human faces and will use objects, like sticks, as tools.  The birds are very shy of humans and will post sentinels to alert the group of any perceived danger.

Crows make well over 200 different vocalizations and have the ability to mimic sounds just like parrots.

Crow family groups can number over a dozen members that includes birds from earlier broods that help raise chicks.

The Audubon Society: 10 Fun Facts About the American Crow

California Audubon Society: Things you may or may not know about crows

Coachella Valley Preserve: What Do Crows Eat: The Feeding Regimen of Crows

Crows and squirrels seem to have very similar diets and often compete for the same food sources wherever the two specie’s ranges overlap.

However, because squirrels are more prone to inhabiting heavily wooded areas and crows prefer more open terrain where they can use their excellent vision to spot prey and watch for predators, the two species would seem to not interact that much on the whole.

The evidence also seems to show that while both squirrels and crows are capable of killing and eating each other, neither species will readily go after the other unless provoked.