Squirrels run in front of cars for a variety of reasons, but they are neither playing chicken nor do they have a death wish. In fact, it is just the opposite.  Unfortunately, it is estimated that over one million animals die every day in just the United States alone from vehicular-related incidents with squirrels taking the honors of having the highest roadkill rate of any animal. 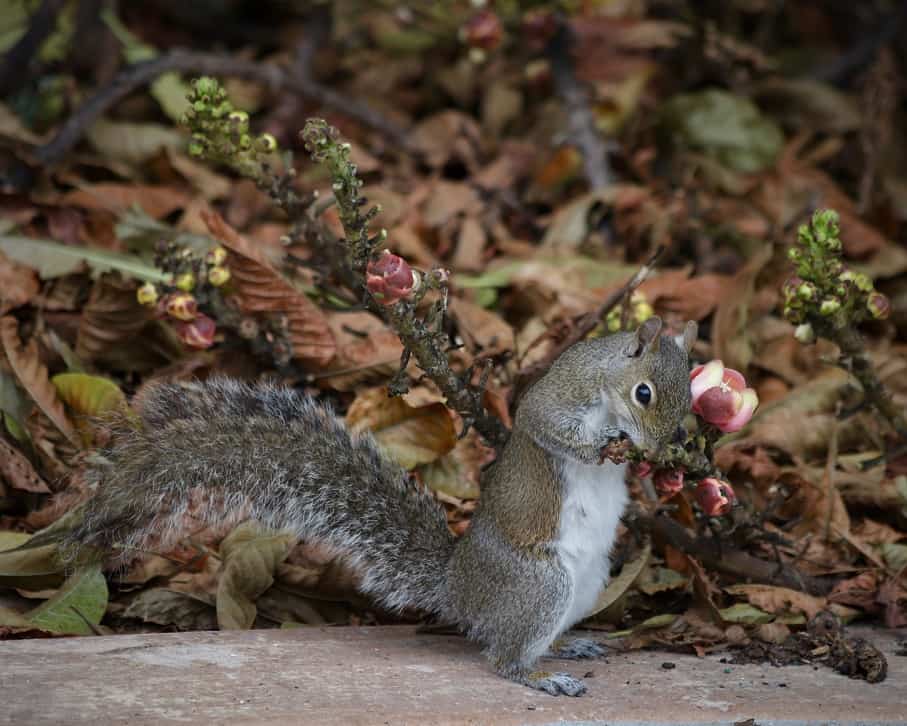 The automobile was first invented around the turn of the 19th century and that much time is just a blip on the evolutionary scale. As such, squirrels haven’t had a whole lot of time to adapt to the threat the modern automobile poses them.

Because of their inability to rapidly adapt to the vehicular threat, the squirrel’s instinctual behaviors are simply counterproductive and oftentimes fatal when dealing with traffic. So, why do squirrels run in front of cars?

The consensus among wildlife experts is that squirrels perceive approaching motor vehicles as predators and it is their natural instinctive inclination to escape the danger by dealing with cars in the same ways they would a predator like a fox or coyote and run in an attempt to evade the threat.

In this context squirrels have a number of “escape” tactics that work extremely well in the woods, but not so great on the street.  Unfortunately, these tactics often backfire and the squirrel ends up as roadkill.

Why Do Squirrels Run in a Zig-Zag Pattern in the Road?

Squirrels perceive motor vehicles as predators and they instinctively know predators cannot change direction as quickly as they can.

This results in squirrels running a zig-zag pattern in an attempt to elude their pursuer. This typically means making a series of fast and successive 90 degree turns in relationship to the direction the predator is traveling.

Unfortunately, the first 90-degree turn is often right into the path of the oncoming vehicle.

Why Do Squirrels Stop In the Middle of The Road?

It is generally believed that squirrels suddenly stop in the middle of the road as part of the same survival instinct as running in the 90-degree zig-zag pattern.

Assistant professor Rebekka Gougis says that this is an effective predator avoidance strategy as the squirrel is quicker than its typical adversary in the woods and can dart out of the way at the last moment as the predator closes in.

Because the squirrels know their natural predators are not able to change directions as quickly, stopping suddenly will either cause their pursuer to overshoot its mark and miss the squirrel or give the squirrel the chance to jump out of the way at the last second.

While the zig-zag, stop and dart tactic works quite well with the squirrel’s traditional natural predators such as foxes, coyotes and even birds of prey like hawks and owls, it proves not to be the most successful strategy in trying to avoid vehicles when crossing the road.

How To Avoid Hitting A Squirrel While Driving?

Holding the top honor for being hit by vehicles makes squirrels are the hardest animal species to avoid when driving. Some fairly extensive studies have shown speed is not a deciding factor in motorists hitting squirrels and the animals are just as likely to be struck by a slow-moving vehicle as a fast one simply because of their zig-zag escape pattern.

If you try to guess which way they will run, you will be wrong half the time.

If you see a squirrel near the roadway, slow down, be extra cautious and just assume it will dart in front of you. This will give you a chance to stop if the animal runs out in front of your vehicle.

Will a squirrel survive if struck by a car?

Because of their small size, if a squirrel is struck by a car it will probably not survive.

Of course there are exceptions to this, such as if the squirrel just has its tail or foot run over. While it may recover from these types of injuries, or even escape unscathed, most often the squirrel will be run over by a tire or hit in the head by the vehicles undercarriage and be killed.