Have you ever stumbled across a chipmunk’s burrow system? Given how extensive these things can be, you probably assumed that chipmunks follow some kind of joint family structure where they live together in their burrows. At least that’s what I thought until a quick search on chipmunks and their living habits told me otherwise. 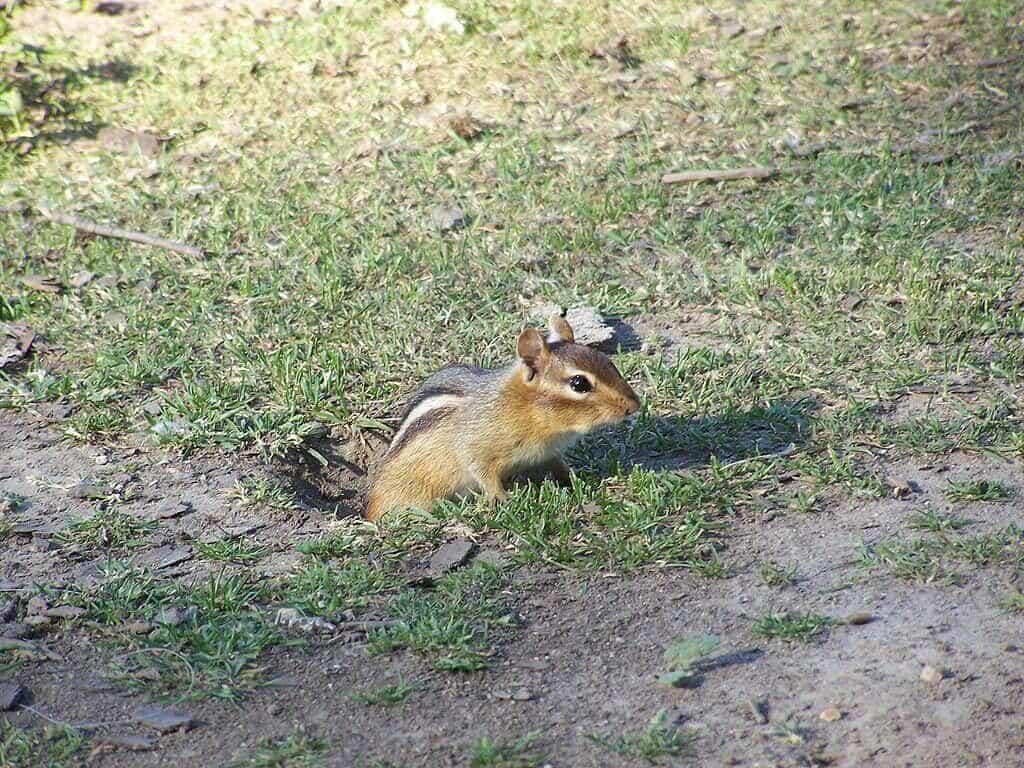 Some of the results of my search were ambiguous at best, but here’s what I found out when I dug into the question, “How many chipmunks live in a burrow?”

Research indicates that, except for when a mother is raising her babies, only one chipmunk lives in a burrow.

Chipmunks Are Solitary and Territorial

According to a study that examined the social system of Eastern chipmunks, you will only see one chipmunk living in a single burrow system. They are not socially active and prefer isolation and solitude for most of the year.

The burrow system used by chipmunks is a complex structure in itself. It comprises of many compartments that are used for sleeping, storing food, and discarding waste such as fecal matter and shells. The main tunnel for each burrow system is usually 10 to 30 feet long.  Adult chipmunks will defend these areas throughout the year. Juvenile chipmunks may do the same, but this is not very common.

This defensive behavior, where chipmunks protect their home sites from intruders, has evolved as a food saving survival mechanism. Chipmunks bury nuts and other food items in food caches during the summer and fall months to make sure they have enough to eat during the winter.

You can check out this video to see how a chipmunk lives and feeds inside its burrow system. You will also get to learn how territorial these animals can be about their food:

Chipmunks Function as a Colony

Even though they are not social animals, chipmunks can function as a colony. Nearly every species of chipmunks interacts with each other through alarm calls. These are usually in response to a nearby predator.

The number of chipmunks that can live together in a colony depends on factors like the food supply, lack of predators, and shelter from any natural disasters. Typically, you will find a colony of 8 to 10 chipmunks over a single acre of land.

Chipmunks become more socially interactive during mating seasons and after the female gives birth. They can be particularly loud during mating season. Chipmunks also exhibit typical behavior where the adult males try to establish their dominance over each other. They will visit areas where fertile females are present and try to mate. During the mating period, male and female chipmunks will pair up briefly and mate multiple times.

When a female chipmunk gives birth, she may live with the father of the offspring for a brief period. More commonly, however, the mother lives alone with her litter in her burrow. Once the baby chipmunks reach an age where they can be weaned off, they emerge from the burrow site and disperse. This usually takes 40 days.

A juvenile chipmunk will be forced to inhabit marginal and vacant areas that are far removed from their birth site. The original residents of the birth site show aggressive behavior to ensure their dispersal. As mentioned earlier, the spatial distribution of these chipmunks, as well as their density within a colony, is determined by the level of predation and food supply.

In the case of the long-eared chipmunk, pregnant females will give birth inside their burrows. The females then move to a tree nest with their offspring. It is likely that they stay there until the offspring have reached a weaning age. This usually takes one month.

Let’s Sum It Up

Have you ever encountered a chipmunk colony or seen how chipmunks live? If so, drop me a comment!