The red headed woodpecker is one of my absolute favorite birds.  I think I like them so much because they are the perfect combination of stunning beauty with a bad attitude that guys find irresistible.

Red headed woodpeckers are interesting in that they always attract tremendous attention from bird watchers but not much is actually known about them.  I did a little research and came up with some interesting facts and observations about these beautiful birds. 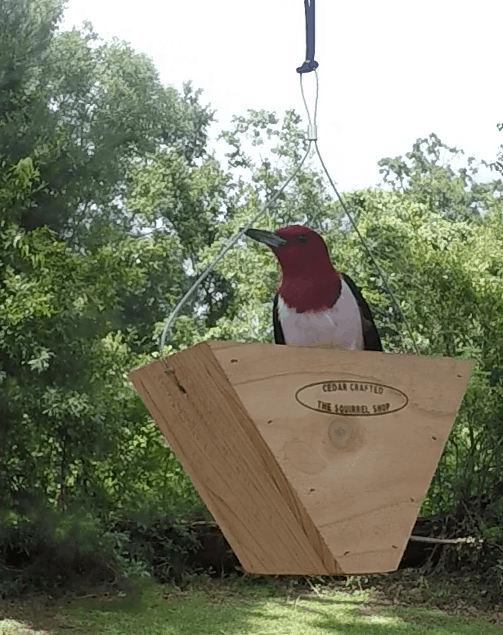 I am fortunate to have some nesting pairs of these birds in the woods behind my house.  I still get a thrill every time one of them lands on one of my woodpecker feeders or even flies through the yard.

They also aggravate the heck out of me!

When they visit one of my peanut feeders like the one pictured above they decide to get picky.  I have watched one of these birds pick up ten different peanuts and toss each one onto the ground before finally finding one that it wanted to eat.

Really?  Are peanuts that different from each other?

These birds are also pretty noisy at times.  My neighbor has metal flashing over his chimney and there is one red head who loves to sit there and bang his beak on the chimney like there is no tomorrow.  When the woodpecker is banging on that chimney it sounds like there is a machine gun going off in the neighborhood!

Basic Facts About These Birds

The folks over at Peterson Field Guides published a very informative video about the red headed woodpecker that has some basic facts and how it compares to other woodpeckers like the red bellied and yellow sapsucker.  The video isn’t too long and is worth a watch!

If you want to see some close up action of these birds at a suet feeder you can watch this video and listen to its call.  The call of a red head sounds a heck of a lot like the sounds squirrels make.  In fact, every time I watch the video with the sound turned up my dogs go NUTS looking for the squirrels.

These birds are thought to be monogamous, but due to the lack of detailed study, this is not certain. The male and female of the species look identical and build their nests in partnership. They will typically raise one or two broods per year from a clutch size of 3-10 pure white, one inch long eggs.

The lack of extensive studies on such a beautiful bird stems form two issues.  The first is that the nesting locations for these birds are often extremely difficult to reach making the physical studies challenging to perform.  The second is that the population of these birds has dropped dramatically making them scarce for observations.

Reasons for the decline of this bird are not firmly established but some of the suspects include:

Red heads are among the few species of woodpeckers that cache food for later consumption.  Red heads love acorns, berries and flying insects.  They have been described as being the most omnivorous of all of the woodpeckers.

These birds are highly aggressive which is perhaps why they were a war symbol of the Cherokee Indians.  I suspect that much of the territorial aggressiveness of these birds relates to competition for scarce nesting cavities and, like seen in territorial pine squirrels, protection of cached food stores.

I read a lot of material on the need to protect these birds but I couldn’t find much information or activity on how a backyard birder could make a difference.

Some folks that are working to help restore this bird’s population are the folks at the Red Headed Recovery: A special committee of the Audubon Chapter of Minneapolis (More detail of their work can be found on this page.)

It seems like the biggest thing that you or I could do is to not cut down big, dead barkless trees on our property.  The trees might look ugly to you and me but the red heads love them!

I am lucky to have these trees behind my house and they look like the perfect habitat for my favorite woodpecker.  I hope they make it through our next tropical storm! 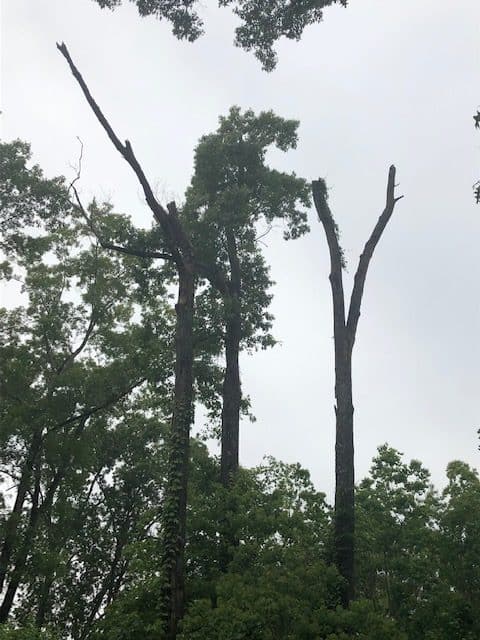