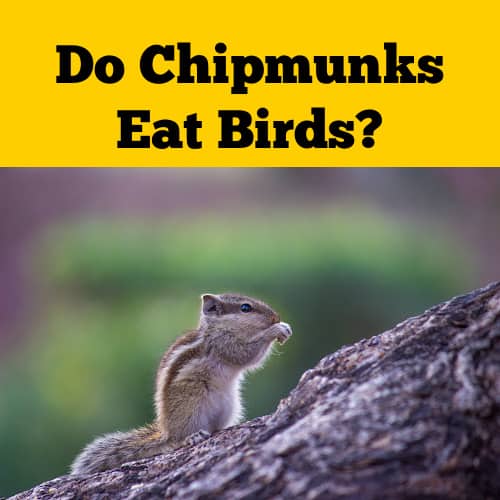 The first thing to understand is that chipmunks are omnivores. That means they will eat just about anything that is available. While they are known for their love of acorns and other nuts, they are not above eating meat.

Will A Chipmunk Eat A Bird?

The simple answer is: “Yes, a chipmunk will eat a bird.”

However, the reality isn’t necessarily that simple. Think about the physicality of a chipmunk for a moment…they don’t have particularly dangerous teeth or particularly strong jaws, and their claws are not really dangerous to much of anything. We can clearly see that the chipmunk was not made to be a hunter.

Since chipmunks cannot hunt, they are not going to chase down a bird, pounce on it, and gobble it up as your cat might do. Instead, they will raid the nests of various birds, eating both the eggs and the chicks themselves. Now you can see that these little creatures aren’t as sweet and innocent as you probably thought! They are perfectly willing to devour a baby bird right from the nest. Before you click on that link, we should warn you that the footage might be a little disturbing.

What Other Creatures Will A Chipmunk Eat?

Apart from birds, most chipmunks will also readily consume insects. These are obviously good prey items for a small mammal like the chipmunk, as they are relatively easy to catch and (usually) not dangerous to the predator. Frogs are another frequent prey item, as most of them are small enough for the chipmunk to handle.

Worms are another good source of protein for chipmunks and are even easier to find and kill than most insects. Although it’s disgusting to think about eating one, earthworms are actually somewhat nutritious. Chipmunks will also eat snails, as they are quite capable of cracking open the shells. Those teeth may not be great for hunting, but they are perfectly adapted to the cracking of nutshells. When they find a snail, they eat it in much the same way that they would eat an acorn: Crack it open and gobble the contents.

Protecting Bird Nests From Chipmunks And Other Predators

You probably don’t want chipmunks gobbling up baby birds on your property, especially if your area is home to a threatened or endangered species. Nest raiding has been known to drive entire species of birds to extinction, although those are the most extreme cases. As such, you might want to take some precautions to protect your birds from chipmunks and other predators.

You don’t want to touch the eggs or the nest itself if it can be avoided. Contrary to popular belief, birds do not abandon their young at the first sniff of a human. Many people believe that if you touch the eggs or the nest, the mother will abandon the young. This can happen, but it doesn’t usually happen. Still, birds can transmit some nasty diseases and certain human diseases can kill them easily. So, it’s best to play it safe and avoid handling the eggs, the babies, or their nest.

One of the best methods is to build some nesting boxes before the nesting season begins. Birds will naturally gravitate to these places, as they are meant to be perfect nesting spots. A nesting box should be enclosed on all sides with a small hole in the front for access. You can also grease the sides, top, and bottom so that a chipmunk cannot climb the box and reach the access hole. It would also be good to sand the box very well with fine-grade sandpaper. Again, this makes it much harder for a chipmunk (or any other non-flying predator) to get in there.

You might also choose to invest in rodent-repelling devices. These can be either chemical-based or electronic, and both are pretty effective. However, you may not want to necessarily chase all the rodents away, so bear that in mind. As annoying as they can be, they are an important part of the ecosystem. Cayenne pepper can also be used as a repellent, and it’s much safer than store-bought chemical products. There are also flares and noisemakers that can effectively scare rodents away, although these might also disturb the birds.

If this article is surprising to you, you aren’t alone. Many people find it hard to believe that a cute little chipmunk is capable of such violent acts. However, we should remember that they are just doing what they must in order to survive. As tempting as it is to judge, we should just try to understand the animal on its own terms. Any animal that can be understood can be predicted, and any animal that can be predicted can be controlled. We hope that this article has answered all of your questions and that you will return soon.