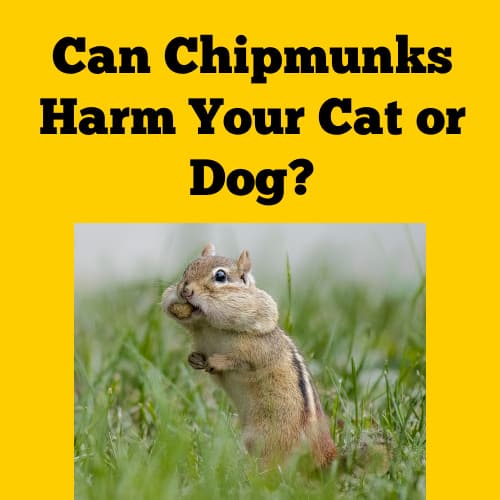 How Can A Chipmunk Harm A Dog Or A Cat?

This is a question that you might be asking yourself right about now. Yes, they are small and skittish, but that doesn’t make them completely harmless. We should say this, to be fair to the chipmunk: If your dog or cat encounters a chipmunk, they will most likely try to escape rather than attack.

However, both cats and dogs are often capable of catching them. When that happens, there is a high likelihood that your pet will eat the chipmunk (or at least chew on it for a while).

That’s where we run into the big problem here, and that problem is disease. Chipmunks can’t do much harm on a direct basis, but they can sometimes carry nasty diseases. Should your pet be exposed to a sick chipmunk, it could be very bad indeed.

Also, chipmunks do tend to bite when cornered. If they do not feel that they can escape easily, they will usually bite, and they can be surprisingly ferocious in such situations. The bites themselves can’t do much damage, but they can potentially transmit any disease carried by the chipmunk.

When we search for information on this subject, we find that everyone has a different list of diseases commonly carried by chipmunks. Right away, we can see that chipmunks have the potential to carry quite a few of them. However, certain big ones will stand out right away, including bubonic plague and rabies.

We need a more authoritative source, so let’s look at a scientific study conducted on various species of chipmunks in California. California has 13 different chipmunk species, which is more than any other state or country in the world.

From their figures, we can see that the diseases were concentrated in certain particular counties. Thus, we can see that some local populations of chipmunks will be exceptionally disease-ridden. On the other hand, some counties had almost no instances of disease at all. Unfortunately, it is hard to predict this kind of thing, so it’s smarter to treat every chipmunk as if it carries a terrible disease. They may be cute, but they are best avoided.

The bubonic plague is also known as “the black death” because it once killed about 25 million people in a single great epidemic. It is caused by a bacteria known as Yersinia Pestis, and that bacterium has been found in chipmunks. This really is one of the most dangerous diseases known to man, and it is usually fatal to both pets and humans.

This is another nasty bacterial disaese, caused by a bacterium named Anaplasma Phagocytophilum. And guess what? Those cute little harmless-looking chipmunks can also carry that one. This disease is also often spread by ticks, but it isn’t fatal like the plague. However, it causes fevers, headaches, muscle aches, and general nausea and is very unpleasant for humans. For dogs and cats, the risk is slightly greater due to their smaller size.

Chipmunks commonly have a lot of ticks, and that’s why they carry many of the same diseases. You probably know that ticks also carry lyme disease, and it is somewhat common. This is caused by a bacteria called Borrelia Burgdorferi and can be transmitted from contact with a chipmunk.

Again, this isn’t a lethal threat, but it causes various bad symptoms like skin rashes, fever, headache, and general fatigue. You certainly don’t want your dog or cat to get this one, either.

This one is hard to predict, as it can range from mild to fatal. This is another tick-borne disease and is caused by a bacteria called Rickettsia. Spotted fever, as the name implies, is a severe type of fever that doesn’t tend to go away quickly. It is potentially fatal, although nowhere near as dangerous as the plague!

What To Do About Chipmunks In Your Yard?

If you have a lot of chipmunks in your yard, they do pose a potential threat to your pets. Thus, you should get rid of them in a humane and non-lethal way. Live traps are an option, as they can then be transferred to a wild area.

There are also ways of repelling such critters from your yard. Chemical repellents can be purchased and spread around the line of your fence, although you should be careful about potential toxicity to your pets here. Sonic repelling devices are also an option, and they aren’t even that expensive.

You might even use fireworks or some other loud noisemaker to scare the living hell out of those chipmunks! There is nothing cruel about that, as it is better for the chipmunks in the end.

Are chipmunks dangerous to dogs and cats? The answer is yes, although the threat is an indirect one. The chipmunk itself poses little threat to your pets, but the diseases that it might carry are another story altogether. That is why you should definitely try to keep them away from your furry friends.

Of course, it would be silly to freak out at the first sight of a chipmunk, but a large number of them is cause for concern. We hope that this information has been helpful, and may all your chipmunk problems be easily solved.