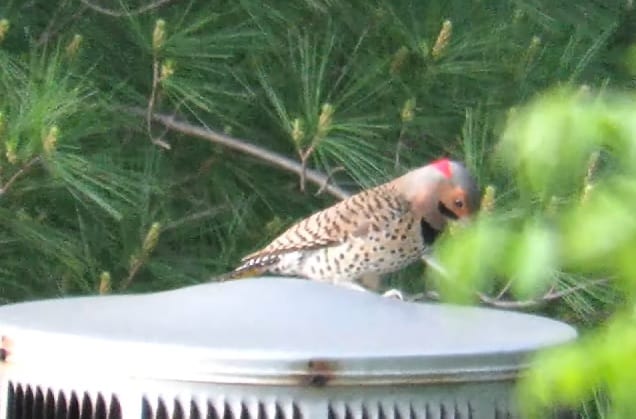 The Four Purposes of Pecking

Woodpeckers are biologically structured to peck. The head and neck of the common woodpecker is insulated from trauma using ingenious mechanisms specifically used to cushion the brain during pecking. Also, their beak is unusually pointy and compact for a bird of its size.

This is all very advantageous for the woodpecker, because this bird uses pecking for everything from finding food to locating a mate to pair with.

Let’s identify the four main reasons why woodpeckers peck and where the role of metal surfaces come into play.

Foraging for Food. One of the most sought-after meals for some woodpeckers (pileated, red bellied, red headed) is the Carpenter Ant. This small insect likes to crawl around just underneath the bark layer of trees—especially older trees that are dead or dying.  When a woodpecker locates a tree that looks like it might be home to wood-boring insects, the woodpecker is likely going to begin drilling in an area where the bark is already somewhat compromised.

Other woodpeckers (sapsuckers) will drill precise rows of small holes in a tree in order to make the sap drain which they then lick up.

If you see a woodpecker hammering its head against a piece of metal then it is NOT looking for food.  Woodpeckers know that they cannot get ants or sap out of a chimney cap.

Making a Home for its Offspring. Woodpeckers will excavate trees for the purpose of making room to build a nest. This is incredibly common across all species of woodpeckers, and the holes they make are often used by other small animals after the woodpecker has raised its family to maturity.

In fact, many small animals have come to rely on the holes drilled by woodpeckers. Without them, safety and security from predators would be much harder to find.

If you see a woodpecker smacking its beak into a satellite dish then it is NOT trying to build a nest.

Alerting Predators or Establishing Territory. The third reason why woodpeckers peck has to do with alerting other animals in the area to their presence. For predators, a loud drumming sound is often enough to discourage them from targeting the woodpecker. The sound can, after all, be heard from hundreds of yards away!

Because larger areas of snags or dying trees can often be targeted by multiple woodpeckers, it’s common for them to drum loudly as a way of saying, “Hey! This tree is mine! Back off!”. Establishing territory in this way will help to ensure the successful growth of the woodpecker’s nascent family.

When a woodpecker is trying to scare off other woodpeckers or potential predators it needs to be as loud as possible.  Do you know what makes a really loud sound when you bang on it?  Metal.

Attracting a Mate. Woodpecker drumming often picks up steam in the springtime, and the reason is because many woodpeckers at this time of the year are looking for a mate.

Male woodpeckers drum loudly and conspicuously to get the attention of available females. And, the females will drum back in response, indicating their level of interest while also revealing their location.  Woodpeckers do not produce songs like other birds and this drumming is their replacement for communication.

When a woodpecker is trying to attract a mate it needs to be as loud as possible.  Do you know what makes a really loud sound when you bang on it?  Metal.

It stands to reason that the louder and more distinct a woodpeckers drumming is, the more effective it’s going to be at either fending off predators or attracting a mate.

Woodpeckers will drum on just about any surface that makes a loud noise.  If you think it is loud when they peck on metal then check out what it sounds like when they peck on glass window panes!  This behavior can have especially annoying consequences for homeowners!

Instead, the woodpecker drumming on metal is almost assuredly either trying to find a mate, establish territory, or protect itself from would-be predators.