The Chipmunk is one of the most recognizable animals in the forest of North America thanks to its distinctive white dots and stripes, meanwhile its chirps and the reasons behind them remain a mystery to many people.

So why do Chipmunks chirp?

The reason Chipmunks Chirp is for territorial defense and to warn other chipmunks  of nearby predators. 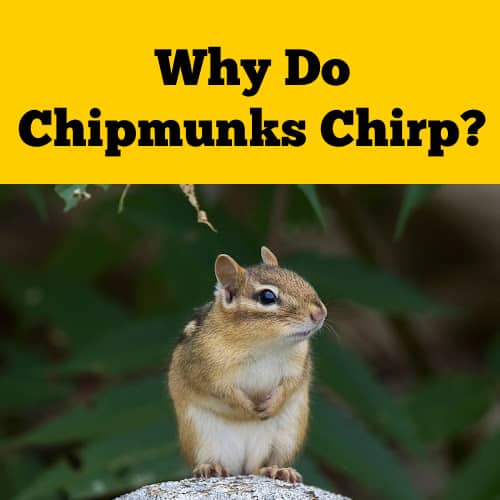 Let’s take a closer look into the types of chirps used and why.

What Chirps Do Chipmunks Make?

All three of  these chirps each have their own unique uses  to help the chipmunk function.  These chirps are essential to the survival of the chipmunks and without them they could never survive out in the wild.

The chip trill is the battle-cry of the chipmunk, a chirp used when the chipmunk is defending its territory. This Chirp is most often used while chasing off other chipmunks or small animals.

What would cause a chipmunk to chip-trill?

The chipmunks territory range is best described as a fifteen meter radius from the burrow, [and it will defend this area with great vigor].

whenever another animal that the chipmunk competes with or sees as a threat such as rats or squirrels,  it will begin to chase the intruder and run around while letting out the chirp-trill in hopes of driving off the threat.

The chip-trill is used when there is a competitor such as mice  and not a predator like a fox or coyote.

What Does It Mean When A Chipmunk Is Chucking?

The chuck is the air raid siren of the chipmunk world. When the chipmunk emits a chucking noise it means there is a predatory bird flying overhead  nearby threatening them. This chirp is used as an alarm of sorts to warn other chipmunks in the area of the threat flying overhead and to take cover.

This keeps the chipmunk safe from the likes of Hawks and owls circling overhead.

What happens when a chipmunk chucks?

Whenever a chipmunk sees the threat in the sky, it will stand still and let out the warning call to its fellow chipmunks. This tells them to all head inside of their underground burrows where they will be safe from aerial attack.

This chuck is only used for aerial predators only to where a different call would be used for ground based threats called chipping.

What Reason Does a Chipmunk Start Chipping For?

Chipping is one of the most important chirps in a chipmunks arsenal and is used to defend against land based predators but can sometimes be used for territory defense.

Let’s take a look at how and why these two uses come into play.

The life of a chipmunk is not easy and many animals have them on the menu. The main perpetrators against these chipmunks are foxes, cats, dogs,  coyotes, racoons, and weasels. While it is used as a warning call to its other chipmunk acquaintances, it can also serve as a deterrent.

For example; a domestic shorthair cat is stalking in the woods and spots a chipmunk. The chipmunk notices this and starts to let out his warning cry to alert the others to get to safety.

Aside from  just letting the chipmunks know to hunker down and hide, it lets the troublesome cat know that it has lost the element of surprise and this discourages the cat from pursuing its prey.

What Other Ways Do Chipmunks Communicate?

Aside  from chirps chipmunks also use body language.

Chipmunks sniff each others butts to get information about other chipmunks. Chipmunks also touch noses to indicate that they want to mate and the females can also use a high pitched chirp to as a mating call . Chipmunks can also show aggression by puffing up their tail.

From a nosey neighbor to an aerial onslaught the chipmunks’ chirps are one of the most important tools a chipmunk has to survive. They can demoralize a cat, alert others of danger and keep away all of those pesky food thieves and home invaders. What more could you ask of a simple chirp?