Pileated woodpeckers are easily identifiable by it’s massive size, pinpointed head plumage and bold streaks of red, black, and white.  You will often see them perched on the sides of dead or dying trees, and if you’re lucky, you might occasionally find one battering away at a section of wood, as woodpeckers are known to do.

Once you’ve seen one of these birds working its way through a tree, you might find yourself wondering, “What do Pileated Woodpeckers eat?”. 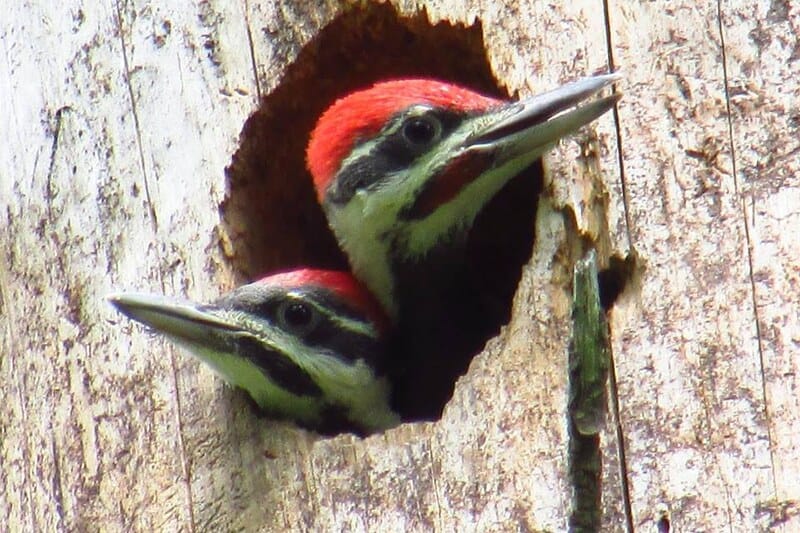 They always seem to be…well…pecking into wood; so, what are they after, exactly? Do they eat the actual wood itself?

In this article, we’ll be exploring the diet of the Pileated Woodpecker, and we’ll be highlighting some of the key behavioral characteristics of this bird—the somewhat quirky things they do to get their food!

One ant in particular, the Carpenter Ant, can sometimes account for more than half of all of the things that a Pileated Woodpecker might eat on any given day. Ants are fairly accessible by the Pileated Woodpecker, and it’s no surprise that this bird can often be found using it’s long beak and even longer tongue to root out ants crawling on and around decaying trees, tree stumps, and other wooden husks.

[Fun Fact: Did you know that the tongue of a woodpecker actually wraps around it’s skull? It’s true—in fact, it’s tongue is so long, it almost completes a full loop around it’s own head. Talk about getting tongue-tied!]

Tiny barbs located on the end of the Pileated Woodpecker’s long tongue act like magnets for small bugs like ants, beetles, and other insects. And, because this bird is the largest woodpecker in North America, it’s crow-like size is enough to keep many other ant-eating predators at bay.

While Carpenter Ants may be the cuisine of choice for the Pileated Woodpecker, it will also eat wild berries, nuts, and other plant-based food it finds while out foraging.

Let’s talk about the pecking part of the Pileated Woodpecker’s lifestyle.

We know this bird loves ants, beetles, and other insects, but not all of these tiny bugs are found walking around out in the open. The most delicious meal for a Pileated Woodpecker is going to take some effort to get, which is work this bird is much obliged to do.

First, the Pileated Woodpecker is going to locate a coniferous or deciduous tree—it doesn’t seem to have a preference for either one—and it’s going to look for areas on the tree where the bark is either weakened or stripped away completely, revealing the tree’s cambium layer below. Boring beetles, ants, and the larvae of these bugs can often be found at or just below this layer, making it a gold mine for a hungry woodpecker.

If there isn’t already weakened bark and if the woodpecker knows there are tasty bugs to be found within this tree, the bird will start stripping away the bark, snapping up the hapless ants and beetles that are exposed in doing so. But, for the Pileated Woodpecker’s insatiable appetite to be thoroughly satisfied, even more has to be done.

This is where the drilling comes in.

Woodpeckers of all varieties are known to ‘chase’ insects they find by drilling multiple, rectangular-sized holes in wood. But, it’s not just wood that a Pileated Woodpecker will bore into. Sometimes, roof flashing, siding, and even wood shake roof tiling can be picked apart with ease by a tenacious woodpecker.

If there are insects to be found on or near a surface, the Pileated Woodpecker is likely to attempt to drill into it. In cases when the woodpecker chooses to drill into aluminum siding, the ‘drumming’ sound created by this bird can be downright loud!

Some woodpecker drilling can be seriously harmful to trees, often causing enough damage to snap them in half. Thankfully, the highest concentrations of things like ants and beetles are found on dead or dying trees that are already compromised, making the Pileated Woodpecker more attracted to woodlots containing older, succumbed trees.

Attracting Pileated Woodpeckers to your property is likely to be more difficult than it is with other birds, as these woodpeckers aren’t going to be as attracted to things like traditional feeders or exposed piles of birdseed—even though these can be effective.

Instead, it’s advised to use a suet feeder with a firm, permeable structure that the woodpecker can perch on. Peanuts, peanut butter, and black oil sunflower seeds are all great attractants for Pileated Woodpeckers, and if you can make this bird work a little bit for their meal, they’ll be up to the task!

Remember that Pileated Woodpeckers love older, dying, or already dead trees that are probable homes to ants and other insects. So, if you have dead trees or taller tree stumps on your property, don’t remove them if you want to see more of these birds around. Instead, consider enticing these birds by smearing some peanut butter-mixed suet along the tree bark.

You’ll get extra brownie points from the Pileated Woodpecker for providing them with a water source like a bird fountain or watering tray.

Also known as Dryocopus pileatus, the Pileated Woodpecker would have been a much more common sight just a few hundred years ago, when this bird enjoyed abundant access to heavily forested areas throughout the eastern United States.

However, in the 18th and 19th century, large swaths of wood clearing contributed to the sharp reduction of Pileated Woodpecker populations. Recently, though, their numbers have seen a healthy rise, making them an increasingly popular bird to look for when outside.