If you love feeding birds in your backyard, chances are you also have squirrels who are frequent visitors. When looking out your windows, you probably see plenty of gray squirrels and maybe even a few fox squirrels in the mix as well. Since they seem relatively friendly with one another, you may be curious as to whether these two species mate with each other now and then. 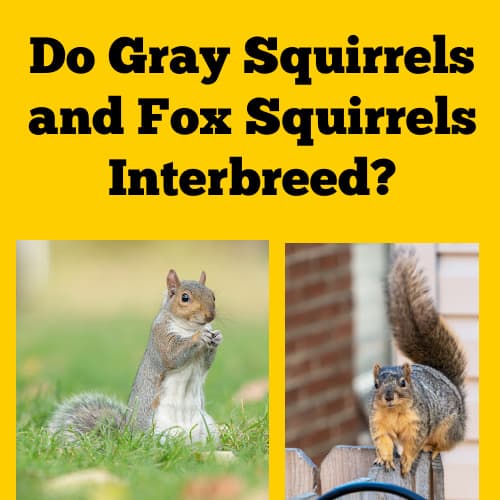 Interbreeding of Gray and Fox Squirrels Can Create Mutations

If you have ever seen a black squirrel in your backyard, at a park, or in the woods while you were hiking, chances are you immediately thought you had made a great new scientific discovery of a new species of squirrel. Unfortunately, seeing the black squirrel won’t make you world-famous in scientific circles. Instead, what you likely spotted was a gray squirrel with a unique genetic mutation, thanks to its parents being both gray and fox squirrels.

Based on a study found in the BMC Evolutionary Biology scientific journal, that black squirrel that got your attention owes its dark coloring to interbreeding between gray and fox squirrels. According to scientists who know a thing or two about fox squirrels, this species is known to carry a faulty pigment gene in its DNA. As a result, though most of the time young squirrels wind up with the usual reddish-brown coloring, some wind up with virtually solid black fur.

Are These Mutations in Squirrels Common?

As you have probably guessed by now, these genetic mutations that produce those black squirrels are not very common. In fact, black squirrels are considered to be somewhat rare sightings. Though found throughout much of North America and the United Kingdom, scientists estimate that only one in every 10,000 squirrels sports black fur. So while you may not have found a new species of squirrel, you have likely seen one that very few others will get to see during their lifetime.

As to why gray squirrels are so numerous in North America and elsewhere, this “tiny molecular switch” as it’s been called by scientists that produces the occasional black squirrel is thought to have played a part in gray squirrels being able to extend their range over the last 11,000 years.

According to Helen McRobie of Anglia Ruskin University in England, the black fur sported by a few select gray squirrels over the years may have given them a distinct advantage in colder climates. Since black naturally attracts heat, scientists theorize this enabled the squirrels to inhabit areas known to have very long and cold winters, particularly northern Canada. Just think, it’s possible that black squirrels were around at the time of the last Ice Age, helping gray squirrels expand to areas that now include your backyard. If this doesn’t peak your curiosity, nothing will.

Squirrels On the Run

While it may seem logical to you as to how gray squirrels that turned into black squirrels courtesy of fox squirrels found new places to call home in the U.S. and Canada, you may still be scratching your head about how they got to be so numerous in the United Kingdom. If you can’t sleep at night because this is weighing on your mind, here is how scientists tend to explain this matter.

Based on research done by Patrick Barkham of the Guardian, black squirrels (which are really gray squirrels) were imported to the United Kingdom to be displayed in private zoos. However, the squirrels were apparently not too keen on losing their freedom. Thus, in 1912 they escaped into the wild and have been on the run ever since, spreading far and wide across beautiful southeastern England.

Well, now that you know just what those gray squirrels and fox squirrels have been up to over the years, you will know exactly what you are looking at the next time you stumble upon a black squirrel in the park, your backyard, or somewhere else. While it may not be a close encounter of the third kind, it will nevertheless be a moment you know is special for a variety of reasons.