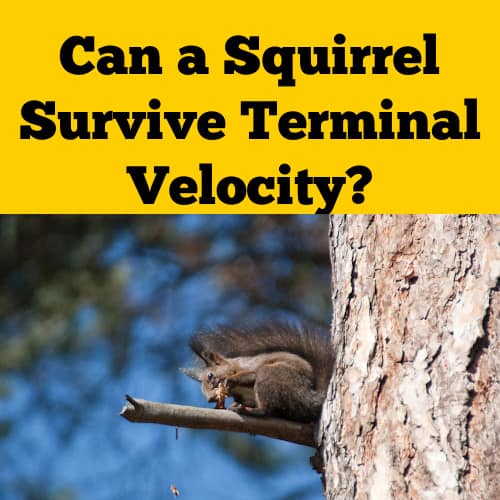 To determine if a squirrel can survive terminal velocity the two opposing forces of gravity and resistance as well as the squirrel’s mass must be taken into account. This requires using a little algebra and some understanding of physics.

Newton’s First Law of Motion states an object at rest will remain at rest and an object in motion will remain in motion and will maintain the same speed and direction unless it is acted upon by an external force, in this case gravity and/or resistance.

The first force, gravity, propels the object downward. The second force, resistance, can be in the form of a fluid or a gas, such as water or air, and works to slow the object’s descent. Here the equation is: F = ma where (F) is force and is equal to the object’s mass (m) times its acceleration (a).

Mass vs weight is an important distinction. The weight of an object is the force gravity exerts on the object so the object’s weight is dependent on the local gravity value. An example of this is the astronauts weighing less on the moon than on Earth. Mass, however, is how much matter an object is made from and is constant. While the astronauts weighed less on the moon, their mass was the same.

Similar to Newton’s first law, the equation is: Fnet = ma. Here the net force (Fnet) is equal to the object’s mass (m) times the acceleration (a).

When trying to understand how this relates to terminal velocity, think of the resistance a squirrel experiences when falling as similar to a person trying to walk into a strong wind. The harder the wind blows the more force the person must exert to move forward. However, as gravity and atmospheric resistance are constants, the speed of the falling squirrel can only increase to a certain speed. This maximum speed is referred to as its terminal velocity.

Calculation of a Squirrel’s Terminal Velocity

So, what does all this mean when trying to answer the question, “can squirrels survive terminal velocity?”

Due to atmospheric resistance, the smaller an animal is the less effect gravity will have on it. In the case of a squirrel, the animal’s mass will determine the maximum velocity it can obtain while falling from and arbitrary height.

Using a coefficient from the standard table of shapes, a squirrel’s coefficient is approximately 1.2. This means the squirrel’s resistance to falling is roughly ten times greater than the driving force, being gravity. Dividing an animal’s length, breadth and height each by ten reduces its surface area to one hundredth of its original area. This means the resistance to falling for a small animal is relatively ten times greater than the driving force.

Without getting too much further into the weeds with the algebra, if we do the math we see the fastest speed a squirrel can reach is roughly 29 feet per second, or 20 miles an hour. Compare this to a human’s terminal velocity when skydiving at about 120 miles per hour.

Additionally, the squirrel reaches the terminal velocity in the first three seconds of free fall. While it may seem absolutely counterintuitive, this means whether the rodent falls from a height of 10 feet or 1,000, the squirrel’s velocity never exceeds 29 feet per second.

Now the only remaining question is can a squirrel survive an impact traveling at a velocity of 29 feet per second? The fact is that this is such a relatively low terminal velocity that a squirrel will most often walk away from the impact with nothing more than a lesson learned. Comparing this to a more understandable human metric, the impact would be less than a person falling off a bicycle.

Going by the numbers and the countless videos posted online of squirrels falling from great heights and scampering away seemingly unscathed, the answer to the question of “can squirrels survive terminal velocity?” seems to be a resounding “yes.” Because the mass would be less and the force and acceleration would be the same, this would also apply to any animal with a body mass equal to or less than that of a squirrel’s.

However, there is at least one seemingly obvious caveat to this conclusion. As long as the squirrel, or smaller animal, lands on something soft, like grass, leaves, sand or a bed of moss, then it will get to walk away. However, if the hapless creature is unlucky enough to land on a rock, sidewalk or become impaled by a stick, it may not be so fortunate.

US Department of Defense: Army Research Laboratory: Calculating Drag Coefficients for Spheres and Other Shapes